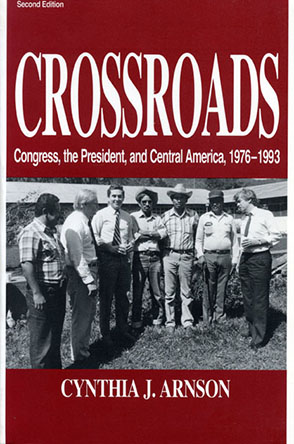 “Arnson, a Washington-based expert on Central America, sets the standard of scholarship for studies of U.S. politics and this country’s involvement in El Salvador and Nicaragua during the Reagan years.”Kirkus Reviews

Cynthia Arnson incorporates substantial amounts of new primary source and recently declassified material coming out of the Iran-Contra trials and other Freedom of Information Act requests in this new edition of Crossroads. She also includes an entirely new chapter that carries the story of the Nicaragua and El Salvador policy debates to the end of the Bush Administration.

“Arnson, a Washington-based expert on Central America, sets the standard of scholarship for studies of U.S. politics and this country’s involvement in El Salvador and Nicaragua during the Reagan years.”Kirkus Reviews

“A highly informative year-by-year account of the making of United States policy toward El Salvador and Nicaragua in the Reagan era. Ms. Arnson, a former Congressional aide who [taught] international relations at American University, provides a careful and noninflammatory reading of the issues that both divided and united the two branches of government--no mean feat considering how highly charged a subject this remains.”New York Times Book Review

“A comprehensive, informative, and clearly written account of the Washington politics of policymaking toward Central America in the 1980s. . . . Herself a participant in the debate as a foreign policy aide to Congressman George Miller (D-Calif.), the author details how the stakes rose until the repeated votes over military aid and other aid to the Nicaraguan contras became the touchstone both of foreign policy prerogatives and of competing worldviews. . . . An illuminating study.”Foreign Affairs

“This especially insightful and well-documented account draws on declassified U.S. government documents as well as the author’s interviews with policymakers in both branches of government.”Latin American Research Review

Cynthia Arnson is Director of the Latin America Program at the Woodrow Wilson International Center for Schools. She served as a foreign policy legislative assistant for the first year of the Carter Administration and was a senior foreign policy aide for five years for Representative George Miller during the Reagan Administration.