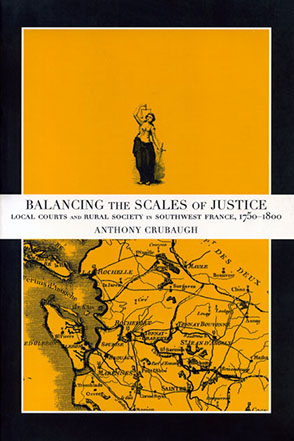 “This is a thoroughly engaging and undoubtedly important book whose lucidity disguises a wealth of demanding research.

Recent revisionist history has questioned the degree of social change attributable to the French Revolution. In Balancing the Scales of Justice, Anthony Crubaugh tests this claim by examining the effects of revolutionary changes in local justice on the inhabitants of one region in rural France.

Crubaugh illuminates two poorly understood institutions in eighteenth-century France: seigneurial justice and the revolutionary justice of the peace. He finds that justice was typically slow and expensive in the lords’ courts, thus making it difficult for rural inhabitants to benefit from official channels of justice. By contrast, revolutionary reforms gave people the opportunity to submit quarrels to trusted and elected justices of the peace who adjudicated disputes quickly and inexpensively.

By juxtaposing seigneurial justice in the ancien régime with the institution of the justice of the peace after 1789, Crubaugh highlights how revolutionary changes in the system of dispute resolution profoundly affected members of rural French society and their relations with the French state. Over time rural dwellers came to accept the primacy of the state in resolving disputes, and the state thereby partially achieved its long-standing goal of penetrating rural areas.

“This is a thoroughly engaging and undoubtedly important book whose lucidity disguises a wealth of demanding research.
One of the great virtues of this book is its succinctness: Crubaugh writes with economy and clarity and uses nicely posed questions to guide the reader through the stages of his argument.”—Peter McPhee, H-France Book Reviews

“In a well-conceived and well-executed study, Crubaugh compares the seigneurial regime with its analogue established by the National Assembly, the justice of the peace, with a focus that is useful on two accounts. It offers a direct comparison of the administration of justice between the Old Regmine and the revolution and it does so in a rural setting: Aunis and Saintonge, which became the Department of Charente-Maritime.
This book is a useful addition to the literature on law and society in southwestern France.”—Michael P. Fitzsimmons, American Historical Review

“Anthony Crubaugh has produced an interesting and significant contribution to French rural history during both the Old Regime and the revolution. His subject, based on the archives of the Charente-Maritime, is an interesting comparison of seigneurial and revolutionary tribunals of justice and their effects on the local community.”—David Hudson, History: Reviews of New Books

“This is a timely and valuable study of the workings of local justice during the French Revolution that examines the institution of the justice and peace, introduced in 1790 as part of a package of reforms, in the light of the revolutionaries’ avowed aim to bring justice to the people and to create a new civic order that would stretch into the smallest village in the land.”—Alan Forrest, Journal of Modern History

Anthony Crubaugh is a visiting Assistant Professor of History at Illinois State University. His articles have appeared in Journal of Social History and A Historical Dictionary of the Napoleonic Era, edited by C. MacKay.