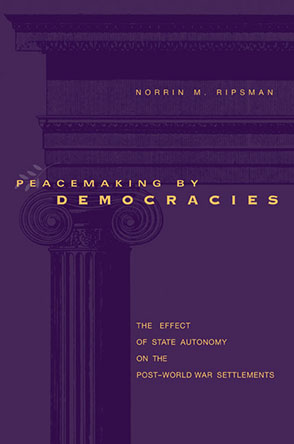 When theorists explain how democracies conduct foreign policy, they tend to ignore or downplay differences and assume that democratic governments all behave similarly. Challenging this assumption, Norrin Ripsman breaks down the category of "democracy" to argue that differences in structural autonomy among democratic states have a lot to do with how foreign security policies are chosen and international negotiations are carried out. Concluding with an examination of the implications of these findings for security policy in contemporary democracies, Peacemaking by Democracies combines innovation in international relations theory with careful primary research in historical archives.

“While many have argued that democracies behave differently than authoritarian states in international relations, few have acknowledged that different types of democracies behave differently. In one of the first analyses of the consequences of democratic differences for international behavior, Ripsman examines the peacemaking policies of Britain, France, and the United States after both world wars. He convincingly demonstrates that the degree of structural autonomy of the executive from the public and the legislature has a profound impact on the foreign policies of democratic states and their influence in international negotiations. This theoretically nuanced and historically rich analysis is a significant contribution to the literature and essential reading for all those interested in how domestic political institutions shape the security policies of states.”—Jack Levy, Rutgers University

“Political science, done well often involves a delicate balancing act. Peacemaking by Democracies is political science at its best. Here the relevant balancing act is between storytelling and formalism, between ‘mere’ history and methodological fetishism. Norrin Ripsman gets the balance just right, and the result is a book that tells us something both novel and important.”—David A. Welch, International Journal

“This significant contribution to the literature on foreign policy and democracy underscores which institutional, procedural, and normative factors contribute to or detract from a democratic executive’s structural autonomy over foreign security policy.”—E. Conteh-Morgan, Choice

“Ripsman’s book succeeds in demonstrating that democracies should not be regarded as a monolithic bloc inasmuch as they display considerable variation in their foreign policies. The author cleverly demonstrates how various perspectives on institutions and behavior may all be correct by application under different circumstances, depending on the executive’s structural autonomy. Moreover, he highlights the importance of informal institutions such as party discipline for foreign policy behavior. Cognizant of problems of classifying autonomy on the basis of the foreign policy decisions to be explained, he makes great efforts to classify structural autonomy from ex ante identifiable characteristics, although the qualitative way in which these features are identified is somewhat case specific and less transparent than I would have preferred.”—Kristian Skrede Gleditsch, Perspectives on Politics

“My minor reservations notwithstanding, The Democratic Peace and Territorial Conflict in the Twentieth Century and Peacemaking by Democracies are both important contributions to the literature on domestic politics and international behavior, and they deserve a wide audience.”—Kristian Skrede Gleditsch, Perspectives on Politics

3. The Domestic Decision-Making Environments of Great Britain, France, and the United States after Two World Wars

Not all democracies are alike. Some grant extraordinary powers to their heads of state or government to make policy, while others possess complex arrays of checks and balances among the various branches of government that limit such power. Parliamentary democracies vest power in a cabinet drawn from the legislature, presidential systems place executive power in the hands of an independently elected president, while still others divide executive power. Some democratic electoral systems are based on proportional representation, while others are based on single-member constituencies and majority or plurality voting. Some are dominated by two political parties; others, by many. In addition to these and other institutional differences, their populations subscribe to different political attitudes and norms pertaining to the use of political power and the goals that the state should pursue.

Political scientists studying the domestic and foreign economic policies of democratic states have concluded that these differences between democracies affect both the policies they select and the autonomy that democratic executives have to choose policies when faced with public and legislative opposition. Surprisingly, however, international security scholars pay little attention to these differences and assume that they do not affect the way democracies choose their national security policies. Indeed, the conventional wisdom is that democracies react in similar ways to international threats and opportunities. This conventional wisdom is wrong.

In this book, I argue that the differences between democracies have profound effects on the way they conduct foreign security policy. In particular, they affect the ability of different democratic governments to choose foreign policies at odds with domestic preferences. Thus, for example, shortly after World War II, the Truman administration was able to commit American troops to Europe to serve its security interests, despite public pressure to bring the troops home. In contrast, the difficulties encountered by the Israeli government, led by Rabin, Peres, and Barak in implementing the 1993 Oslo Accords indicate that some democratic regimes must take domestic opposition seriously, even on security matters of the utmost importance. Clearly, it would be useful to discover the conditions under which domestic opposition affects foreign security policy in different democratic states.

This book examines the institutional, procedural, and normative differences between democracies in order to determine how they affect the independence of democratic leaders from domestic opinion. It argues that domestic political structures that insulate the government from the public and the legislature increase its ability to pursue unpopular policies, but simultaneously weaken its position in international negotiations. Governments that are not structurally insulated can still achieve some independence when they are willing to deceive their domestic opponents, but this is a costly strategy that is of only limited utility.

I test this argument by examining the peacemaking policies of Great Britain, France, and the United States after both world wars. In each country, domestic opinion demanded punitive peace terms, while national leaders believed that some degree of moderation was warranted. Yet, they followed very different policies. The structurally insulated governments (the United States and Great Britain after World War II) opted for moderation, while the rest (all three democracies after World War I and France after World War II) made significant concessions to public and legislative demands. Furthermore, the structurally weaker governments (all three democracies in 1919 and France after World War II) were able to parlay their democratic constraints into gains in international negotiations over the postwar settlements. Thus, the conventional treatment of democracies as a group of like states that behave similarly in the international arena is both inappropriate and misleading. We must, therefore, unpack this category in order to generate a richer understanding of the complex range of democratic arrangements and their effects on national security policy.