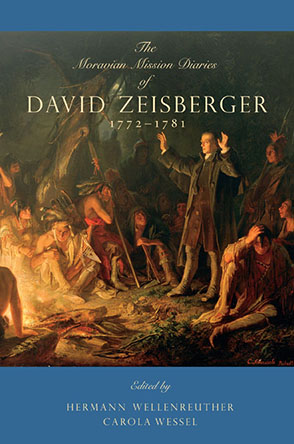 “David Zeisberger’s diaries are a rich source for Native American and Moravian history. The 1772–1781 diaries remain largely untapped by American scholars because they have not been available in English translation. Publication of this modern scholarly edition, therefore, will have a major impact on the field of early American history.”—Daniel K. Richter, University of Pennsylvania

David Zeisberger (1721–1808) was the head of a group of Moravian missionaries that settled in the Upper Ohio Valley in 1772 to minister to the Delaware Nation. For the next ten years, Zeisberger lived among the Delaware, becoming a trusted adviser and involving himself not only in religious activities but also in political and social affairs. During this time he kept diaries in which he recorded the full range of his activities. Published in English for the first time, The Moravian Mission Diaries of David Zeisberger offers an unparalleled insider’s view of Indian society during times of both war and peace.

Zeisberger’s diaries, today housed at the Moravian Archives in Bethlehem, Pennsylvania, present a detailed picture of the effect of the American Revolution on one Indian nation—not only on political issues but also in terms of its economy, culture, and demographic structure. A later portion of the diaries, covering the post–Revolutionary War years, was translated and published in the nineteenth century, but the 1772–81 diaries have never been published in English translation. This translation is based on the full scholarly edition of the diaries, which Wellenreuther and Wessel published in Germany in 1995. Publication of this volume will forever change the way we see the impact of the American Revolution on Indian life and on the Ohio country.

“David Zeisberger’s diaries are a rich source for Native American and Moravian history. The 1772–1781 diaries remain largely untapped by American scholars because they have not been available in English translation. Publication of this modern scholarly edition, therefore, will have a major impact on the field of early American history.”—Daniel K. Richter, University of Pennsylvania

“This edition of David Zeisberger's diaries and journals contains a cornucopia of ethnographic and historical information about the Delawares and neighboring tribes in the upper Ohio Valley during the Revolutionary era. The editors have done an excellent job of identifying and expanding our knowledge of many of the important figures from this period. This volume will be welcomed by any scholar interested in the early history of Ohio or western Pennsylvania—a most valuable addition to the collections of published primary materials on these subjects.”—R. David Edmunds, University of Texas at Dallas

“The scholarly apparatus of the book is unsurprisingly thorough and meticulous. The register of persons is something every book of Pennsylvania history should have. The entire volume is beautifully produced, from the map endpapers to the informative footnotes. Every library worth its Pennsylvania salt ought to own this book.”—Jeffrey S. Wood, Cumberland County History

“Wellenreuther and Wessel’s work has made available a valuable resource for a wide range of scholars.”—James L. Schwenk, Pennsylvania Magazine of History and Biography

Hermann Wellenreuther is Professor of Modern History at the Georg-August-University in Göttingen and the author of books on early modern German, English, and North American history. He co-edited, with Hartmut Lehmann and Renate Wilson, In Search of Peace and Prosperity: New German Settlements in Eighteenth-Century Europe and America (Penn State, 2000).

Index of Place and River Names and Other Geographical Terms

On 9 November 1781 the commanding officer of British forces, Major S. De Peyster, and his interpreter met with some Delaware chiefs and Shawnee warriors in the council chamber of Fort Detroit for the interrogation of six missionaries of the Moravian Church. This interrogation indirectly praised the accomplishments of David Zeisberger’s work, which had begun in 1768 in the Ohio region. After a slow and difficult start, the successful mission congregations, to their dismay, found themselves gradually involved in the War for Independence between Great Britain and her colonies. The missionaries and their Christian Indian Helpers tried to work for peace and remain neutral in the conflict. They failed; the combatants perceived their neutrality as sympathy for the opposite camp. Thus the Native American allies of Great Britain, especially the Shawnee and factions of the Delaware, repeatedly lodged complaints with the governor of Fort Detroit, stating “that the Moravian Teachers had always apprised the Enemy of our Manoeuvres by which means they were always frustrated.”

The missionaries had repeatedly been asked to remain strictly neutral, but these warnings had been ignored. Finally a group of Indian warriors under the command of British officers was dispatched to conduct, if necessary with force, the missionaries with their congregations to Upper Sandusky. They left on 11 September 1781. A few weeks later the missionaries were brought to Fort Detroit for an interrogation.

Q. How many are there of your mission?

Q. Where are you from?

A. Bethlehem in Pennsylvania and two sent to each Town—

Q. By what authority do you act?

A. By that of our Bishops at Bethlehem.

Q. How long have you been in the Indian Country?

A. I have been on the Muskingum River since 1768 and many followed me.

Q. By what did you pass?

A. By permission of Congress.

Q. I suppose you must have rec’d instructions from the Congress.

Q. What correspondence could you have carried on with the Enemy, which I have been informed by my Interpreters that you have practised from time to time.

A. Being obliged to draw near to the Kooshaking Indians we were often importuned by them to write to Fort Pitt and after two years residence with them we found they were rather troublesome which obliged us to quit their Towns and retreat to our former villages as we had long declined writing for them, we drew their resentment upon us, since when we have never wrote any.

Q. How many Indians are there who belong to your Mission?

A. Including Men, Women and Children 350.

Q. Have they ever joined in the War?

Zeisberger’s responses summarized the factual history of the Moravian mission in the Ohio region. After early unsuccessful trials between 1768 and 1771 northeast of Fort Pitt, the missionaries founded mission congregations in the upper Muskingum River valley region. The beginnings, the rise, the life, and the problems of these mission congregations are detailed in these diaries, published here in English for the first time.

The diaries, most of which were written by David Zeisberger, transport the reader into a strange world. This world was unknown to Europeans, including the Moravian Missionaries when they first came to the Muskingum valley. The region seemed just as alien to the British soldiers who were sent there some years after the Moravians arrived. The soldiers of the Continental army were no more familiar with the territory; probably only Indian traders and the Native Americans residing in the area were familiar with the region.

Were Zeisberger to visit the region today, he would scarcely recognize it. Creeks have disappeared, rivers have been tamed, and extensive works to control floods have changed much of the surface, topography, and vegetation of the region around what today is New Philadelphia. What sounds strange to our ears today, what seems incomprehensible to us now, was normal and familiar to the Mingo, the Delaware, and the Shawnee. David Zeisberger and the other missionaries shared in that knowledge after 1772.

Their ignorance of the Ohio region did not mean that European settlers were not interested in it. On the contrary, the region had become the subject of intense dispute between English and French colonists as well as their mother countries long before the features of the country had been fully explored. Indeed, France and England both claimed exclusive right of possession to this region. It is the purpose of this introductory essay to make the reader of these diaries familiar with this strange world. We begin with a sketch of the general historical background and then turn to a description of what was known to the people in the early 1770s about the Ohio region. A brief description follows of the Native American tribes in the region and of how their settlements moved west over time. Finally, we turn to a narrative of Lord Dunmore’s war as the last war between Native Americans and white settlers over land before the beginning of the War for Independence.

This, of course, is the Euro-American perspective. In the Native American perspective that I attempt to recover in the next section of this introduction I pay special attention to Lord Dunmore’s war. For it was this conflict that ushered in an era of warfare that led to the eventual dislocation of all native settlements in the area and the loss of large parts of native hunting grounds. For the indigenous tribes, this greatest crisis in memory ended with a series of peace treaties in 1782 and 1783; but the final curtain in the drama fell only with the Treaty of Greenville a decade later.

The third part of this essay focuses on the Moravians, their missionaries, and their theology. Here I sketch the mission congregations in the Ohio region and offer biographical details about David Zeisberger, the author of these diaries.

The final part of the introduction describes the diaries themselves, their physical features, how they have survived over time, and their value as sources for the history of mission, for the life and history of Native Americans, and for the war in the Ohio region. The introduction concludes with a discussion of the problem of translation as a process of transferring a text from one culture to another. The appendix to the diaries reproduces some key documents. We have also included indexes of the geographical terms and a complete list of names, together with the vital data that we could locate, including variations in the spelling of contemporary Native American and European names.

Edited by A. G. Roeber