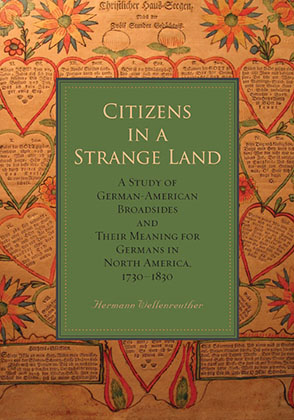 “Through his analysis of these prints, Wellenreuther provides new insights into the social, political, and religious history of the largest non-Anglophone minority in colonial, revolutionary, and young republican America. As a bonus to its scholarly value, the book is also an enjoyable read.”—Gerald Theodore Macdonald, Journal of Moravian History

To see digitized versions of some of the broadsides covered in this book, visit the Penn State University Libraries' digitized broadsides collection and bibliography.

In Citizens in a Strange Land, Hermann Wellenreuther examines the broadsides—printed single sheets—produced by the Pennsylvania German community. These broadsides covered topics ranging from local controversies and politics to devotional poems and hymns. Each one is a product of and reaction to a particular historical setting. To understand them fully, Wellenreuther systematically reconstructs Pennsylvania’s print culture, the material conditions of life, the problems German settlers faced, the demands their communities made on the individual settlers, the complications to be overcome, and the needs to be satisfied. He shows how these broadsides provided advice, projections, and comment on phases of life from cradle to grave.

“Through his analysis of these prints, Wellenreuther provides new insights into the social, political, and religious history of the largest non-Anglophone minority in colonial, revolutionary, and young republican America. As a bonus to its scholarly value, the book is also an enjoyable read.”—Gerald Theodore Macdonald, Journal of Moravian History

“[Wellenreuther] and his team have provided ample fodder for those who want to do further research. This together with their willingness to transcend the ‘purely textual meaning’ of the broadsides recommend their project to readers and researchers on both sides of the Atlantic.”—Cynthia G. Falk, Amerikastudien

“Broadside scholars, move over! This book by Germany’s leading Americanist is the capstone of the Göttingen University survey of German-language printing in the United States in its first century (1730–1830). Wellenreuther’s meticulous textual analysis of the American German broadside corpus, paired with relevant European background materials, vividly reconstructs both the secular and the religious worlds of America’s pioneer German-speaking population. His insights into the motivations and expectations of the producers, consumers, and peddlers of these ephemeral prints spotlight in new ways the complex printing network in early America. The book’s masterful use of political broadsides before and during the Revolution, as well as in the Federal era, accents the often underrated role German speakers played in middle states politics. We come away with an impression of the very particular American identity of the Pennsylvania Germans and their linguistic kinsmen in the South, the Midwest, and Canada. Thank you, Professor Wellenreuther, for a fascinating transatlantic read!”—Don Yoder, University of Pennsylvania

“Wellenreuther’s masterful and meticulous examination of popular printed works provides a nuanced perspective on the culture of German-speaking settlers in colonial America. What interested them? What worried them? What did they desire? Often reprinted texts resonated with the German-speaking public in a way that rarely printed texts couldn’t. These broadsides show that German-speaking settlers did not simply replicate the religious and political structures they had left behind but created a new German-American culture.”—Craig Atwood, Moravian Theological Seminary

“Citizens in a Strange Land offers fascinating insight into the material conditions of early German settlers in America. By analyzing broadsides, a means of communication previously disregarded by many scholars, Wellenreuther is able to vividly evoke the religious and political world of German settlers, their expectations and concerns, their anxieties and joys, and their ideals and ideas.”—Paul Peucker, Director and Archivist, Moravian Church Archives

“In this systematic and thorough study of German-language broadsides in early America, Hermann Wellenreuther works the magic of a master historian. First, through a meticulous analysis of hundreds of broadsides, he brings to light the details of the broadsides’ production and distribution as well as the motivation behind their creation. Then, drawing on his deep knowledge of German-speaking communities in America, Wellenreuther shows how these simple one-page documents enrich our understanding of German life and culture and reveal a people intent on defining for themselves their place in American society.”—Philip Otterness, author of Becoming German: The 1709 Palatine Migration to New York

“In Citizens in a Strange Land, Hermann Wellenreuther provides a unique window into the print world of eighteenth- and nineteenth-century German-speaking Americans. Based on a meticulous analysis of more than 1,600 broadsides printed in German, this study illuminates the material, economic, religious, and political world of the immigrants and their descendants. Wellenreuther argues that broadsheets during the period mediated relationships between their producers and those who read them. They raised attention to ways of supplying the needs or fulfilling the interests of their consumers. By carefully examining the content of broadsides and placing them in their context, Wellenreuther and his team reveal the extensive and fascinating web of social relations among German-speaking Americans.”—Rosalind Beiler, University of Central Florida

“Hermann Wellenreuther explores the perceptions and visions of the creators, distributors, and consumers of German-language broadsides. He describes a dispersed network of printers, peddlers, booksellers, and merchants that supplied these documents to German customers throughout Pennsylvania and surrounding areas. The broadsides covered a surprising range of secular and religious topics, which Wellenreuther explores through careful and nuanced textual analysis. By approaching each broadside as the product of and a reaction to a particular historical setting, he is able to shed new light on the distinct needs and concerns of Germans in America. Wellenreuther's detailed study of a unique and substantial body of printed records produced by and for German Americans greatly enhances our understanding of German society in colonial and early national America.”—Friederike Baer, Penn State University

Hermann Wellenreuther is Professor Emeritus at the Georg-August University in Göttingen.

In a broadside published in September 1741, Conrad Weiser reminded his fellow German settlers of what they had hoped to achieve in immigrating to Pennsylvania: “to attain peace and security, and to more easily secure our daily bread than in Germany. All of which we have abundantly achieved [in this country].” In the midst of social, political, and military crises, thousands of middling and poor people in southern Germany had packed up and decided to leave. Most of them opted for eastern Europe, but by the time of the American Revolution some one hundred thousand men, women, and children from Baden and Württemberg had emigrated to Pennsylvania, their “new Canaan.” To Badenians and Swabians Pennsylvania was known as the land of unlimited freedom of conscience, the land of liberty, rights, and the possibility of acquiring property by sheer dedication, work, and discipline—virtues southern Germans seemed to possess in abundance. Faced with feudal dues and indebtedness, these Germans were tired of being discriminated against as the dregs of society, tired of war miseries, and tired of shabby treatment by their local landlords and squires. To them, Pennsylvania seemed the land of hope and glory, the perfect refuge where they would be able to achieve a peaceful life on earth and eternal bliss in heaven.

With the beginning of the War of Austrian Succession in December 1740, the harmony that had reigned in Pennsylvania collapsed—not because Thomas Penn, eldest son of William Penn, had become the monster some of his political opponents thought, but simply because macro-political conditions in Europe and in the Atlantic world had changed. As shadows began to darken the bright new American world, Conrad Weiser’s broadsides appealed to the rapidly growing number of German immigrants to vote for candidates who, under the mounting danger of war, favored defensive measures. They mark the beginning of one of the most turbulent phases in the history of Pennsylvania.

Germans had fled war and misery. Now, according to Weiser, war had again caught up with them. Yet that was not the only problem Germans faced. They could not understand Pennsylvania’s large English-speaking majority; they had to accept indentures for up to five years with a farmer, albeit often a German one; in the first two years increased mortality threatened their lives; and they had to cope generally with cultural, political, and social dislocation. These difficult experiences, together with their European memories, became deeply engrained in their minds.

The English, Welsh, and Irish in Pennsylvania experienced this influx of foreigners differently. For them in 1739 Pennsylvania was still a peaceful haven, stable and quiet except for the little catastrophes here and there. Two years later that peace was gone. Political controversy reigned as the colony became politically deeply divided between the dominant Quaker Party and the small but influential Proprietary Party, which drew its strength from its closeness to the proprietors of the colony. In this context the German settlers voted the way most English settlers did: for the Quaker Party. As long as the number of naturalized German settlers was small, their vote was insignificant. The rapidly growing influx of Germans from the 1730s onwards, however, increasingly irritated the English, who perceived these newcomers as a danger to English culture and politics.

The process for acquiring full citizen status and thus the right to vote was eased in 1741 by the arrival of the new general naturalization act of the British Parliament and in February 1743 by the passage of laws in Pennsylvania that allowed German Mennonites and other peace churches to substitute affirmations for the required oaths of allegiance. Along with the substantial immigration not only from Germany but from Scotland and Ireland, this meant that Pennsylvania was gradually becoming a multiethnic society. This picture was complicated even more by a continuous substantial immigration from Ireland and Scotland. As future developments would show, the English considered both a problem. As it turned out, Germans would come to adopt English prejudices toward the Irish. Another consequence was that pacifism, which had been seen as a distinctive mark of Quakerism, came to be associated with a number of German peace churches, including Moravians, Mennonites, and Dunkers. The consequences of this development would continue to surface in Pennsylvania politics until the early nineteenth century.

Most German immigrants, like most of Pennsylvania’s population in general, became farmers. The greater part of them finally settled in the colony’s southeastern counties, Berks, Lancaster, and Northampton, which became German strongholds after the middle of the eighteenth century. This is the region with which this book is primarily concerned.