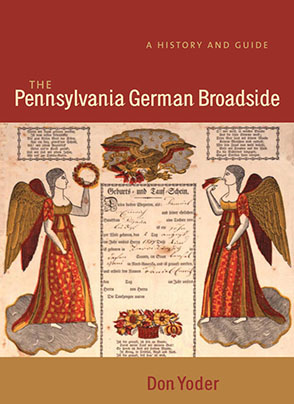 “Don Yoder delves deep into the history of this elaborate form of printing, providing German terminology along with more than 200 elaborate illustrations and photographs. This beautifully designed hardcover book would be an attractive addition to any history buff’s coffee table.”—Lisa Kellar, Pittsburgh City Paper

Fifteenth-century Germany was the birthplace of movable type and of one of its powerful consequences, the broadside. These mass-produced printed sheets allowed both the Renaissance and the Reformation to spread with previously unimaginable speed, and when German immigrants made their way to North America, the cultural significance of the broadside followed. Don Yoder’s The Pennsylvania German Broadside examines the history and legacy of these printed sheets within the Pennsylvania German community.

The author defines a broadside as any piece of paper printed on one side that is intended to be given away or sold. Where some experts have narrowed the definition of the broadside to focus primarily on song and ballad broadsides, Professor Yoder’s definition encompasses a much wider range of material. In this more comprehensive approach to the medium, not only “street literature” but also such documents as elegies, spiritual testaments, and certificates of birth, baptism, confirmation, and marriage are all considered legitimate broadsides that tie the individual to the culture of the community. After tracing the migration of the broadside from Germany to America, the author dedicates each of ten chapters to a specific broadside subject, including medical broadsides, political and military broadsides, sale bills, posters, house blessings, and “letters from heaven.” All German texts have been translated or paraphrased for the reader’s convenience.

Professor Yoder recently donated a vast collection of Pennsylvania German broadsides to the Library Company of Philadelphia. A selection of these artifacts, part of the Roughwood Collection, will go on display in September 2005 as the centerpiece of a broadside exhibition at the Library Company. More than a catalogue of the exhibition, this book explores the history and cultural significance of the broadside, illuminating the ways in which it both reflected and influenced Pennsylvania German life.

“Don Yoder delves deep into the history of this elaborate form of printing, providing German terminology along with more than 200 elaborate illustrations and photographs. This beautifully designed hardcover book would be an attractive addition to any history buff’s coffee table.”—Lisa Kellar, Pittsburgh City Paper

“The Pennsylvania German Broadside exudes the passion that Yoder has as collector, historian,and folklorist for this material and this culture. In addition, it is the story of a scholar’s lifelong dedication to his work. . . . If the paper ephemera of all American communities had such a devoted collector and analyst who was willing to labor such challenging material throughout and entire career, the study of American culture, past and present, would be much richer for it.”—Leonard Norman Primiano, Pennsylvania Magazine of History and Biography

Don Yoder is Professor Emeritus of Religious Studies and Folklore and Folklife at the University of Pennsylvania. He is past president of the American Folklore Society and co-founder of the Pennsylvania Folklife Society.

The Broadside in Germanic Europe

The Broadside in Britain and Anglo-America

The Broadside in Pennsylvania-German Culture

2. The Broadside and Customs of the Year

9. The Broadside and the Rites of Passage

10. Prints: The Picture World of the Pennsylvania Dutch

The Broadside in Germanic Europe

The invention of printing with movable type in Europe in the fifteenth century brought with it a cultural revolution that influenced every area of the life of our ancestors in Germanic Central Europe. It was essentially a revolution in communication, as is the current computer revolution that we are today in the very midst of, which is changing the world of the book into the world of the Internet.

The Renaissance was aided by print in spreading the Greek and Roman classics among the intelligentsia and promoting Renaissance humanism and classicism. The Reformation was also immensely aided and fostered by the print revolution. Luther’s, Zwingli’s, and Calvin’s writings and those of their associates and followers were spread in every direction. Tracts, liturgies, creeds and confessions, hymnbooks, and other religious productions spread the new faith, led of course by the Reformers’ rediscovery and vernacular translations of the Bible and its rapid diffusion through print. Even satire, caricature, and crude cartooning were pressed into service to aid the Protestant advance, although the Catholic Counter-Reformation produced counterblasts of the same, often somewhat gross, materials. Lampooning the “enemy” was a favorite occupation of woodcut producers, engravers, poetasters who wrote the accompanying verses, and printers. In this cultural and religious maelstrom of conflicting ideas and new approaches to Christianity the broadside played a major role. So let us look at the broadside in Europe, its terminology, its production and marketing, and its cultural significance.

The terminology of the broadside can be summarized as follows. The term “broadside” in English is the major designation; the later and lesser term “broadsheet,” used principally in the British Isles, is the minor designation. Both mean a piece of paper printed on one side, to be sold or distributed to interested clients. Related terms are “handbill” (as in the common but now somewhat archaic phrase, “Post no bills!”), flyer, leaflet, and poster. The last is usually a larger one-page sheet pasted against a flat surface to announce sales, circuses, theater productions, etc., or printed on stiff cardboard for display in store windows or other public venues.

Included under my definition of broadside is the second category of “print,” i.e., a one-page picture, often colored, with minimal text. Many of these bear religious motifs and serve the purposes of devotion or spirituality, at church or at home. Others are secular, sometimes humorous. And still others are portrait prints of individuals who are considered role models in a given society.

My definition of the broadside thus includes a range of ephemera—all printed on single sheets of paper. It is my personal opinion that British and American folklorists in particular have skewed the definition of the broadside by overemphasizing song and ballad broadsides as “street literature.” The range of the broadside properly embraces more than popular literature hawked on the streets. The Pennsylvania Dutch certificates of birth, baptism, confirmation, and marriage, and elegies and spiritual testaments, while not street literature, are legitimate broadsides that relate the individual to the community culture. One can also cite as broadsides legal forms, in German and English, for indentures, appointment of estate administrators, and certificates of naturalization. All of these were functional in the historic Pennsylvania Dutch culture of the past.

Powwowing Among the Pennsylvania Dutch

A Traditional Medical Practice in the Modern World

To the Latest Posterity 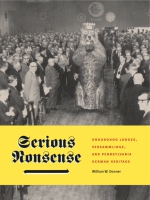