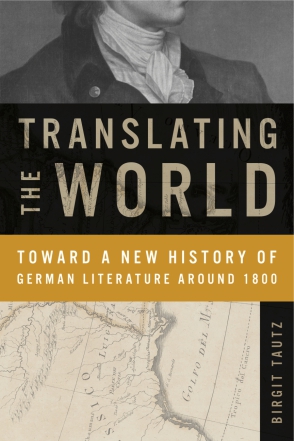 “Concentrating on texts other than the classics of the canon allows for fresh perspectives. If ‘all politics is local,’ so, too, seems culture. Includes impressive bibliography, documentation, and index. Recommended.”—J. M. Jeep, Choice

In Translating the World, Birgit Tautz provides a new narrative of German literary history in the late eighteenth and early nineteenth centuries. Departing from dominant modes of thought regarding the nexus of literary and national imagination, she examines this intersection through the lens of Germany’s emerging global networks and how they were rendered in two very different German cities: Hamburg and Weimar.

German literary history has tended to employ a conceptual framework that emphasizes the nation or idealized citizenry, yet the experiences of readers in eighteenth-century German cities existed within the context of their local environments, in which daily life occurred and writers such as Lessing, Schiller, and Goethe worked. Hamburg, a flourishing literary city in the late eighteenth century, was eventually relegated to the margins of German historiography, while Weimar, then a small town with an insular worldview, would become mythologized for not only its literary history but its centrality in national German culture. By interrogating the histories of and texts associated with these cities, Tautz shows how literary styles and genres are born of local, rather than national, interaction with the world. Her examination of how texts intersect and interact reveals how they shape and transform the urban cultural landscape as they are translated and move throughout the world.

A fresh, elegant exploration of literary translation, discursive shifts, and global cultural changes, Translating the World is an exciting new story of eighteenth-century German culture and its relationship to expanding global networks that will especially interest scholars of comparative literature, German studies, and literary history.

“Concentrating on texts other than the classics of the canon allows for fresh perspectives. If ‘all politics is local,’ so, too, seems culture. Includes impressive bibliography, documentation, and index. Recommended.”—J. M. Jeep, Choice

“Birgit Tautz has written a convincing and powerful book that makes an important contribution to eighteenth-century studies, not only in the field of German literature. Using the idea of a network of urban intellectuals mediated through translated texts, she provides an original and nuanced perspective on emerging global networks in late Enlightenment Europe. Translating the World opens up fascinating possibilities for rethinking eighteenth-century European culture.”—John K. Noyes, University of Toronto

“Deploying the suggestive neologism Glokalisierung, Tautz’s timely and innovative book places the profoundly local and particular in eighteenth-century Germany (cities as divergent as the tiny, apparently parochial Weimar and the world city Hamburg) into dialogue with national and transnational developments. Translation, gossip, and rumor emerge in her study as potent vectors of sociability that mediate international, national, and local concerns.”—Catriona MacLeod, author of Fugitive Objects: Sculpture and Literature in the German Nineteenth Century

Birgit Tautz is Professor of German at Bowdoin College. She is the author of Reading and Seeing Ethnic Differences in the Enlightenment: From China to Africa.

The City and the Globe: On Remaking German literature

Lessing Dethroned: the Hamburg Dramaturgy and the Eighteenth-Century World

Leaving the City: Conversion to Community, Redemption, and Literary Sociability