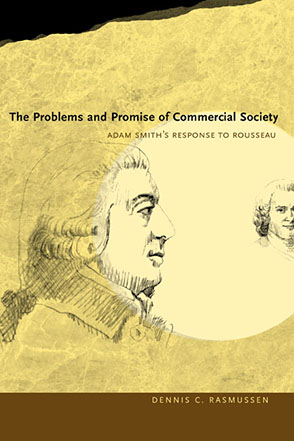 Adam Smith is popularly regarded as the ideological forefather of laissez-faire capitalism, while Rousseau is seen as the passionate advocate of the life of virtue in small, harmonious communities and as a sharp critic of the ills of commercial society. But, in fact, Smith had many of the same worries about commercial society that Rousseau did and was strongly influenced by his critique.

In this first book-length comparative study of these leading eighteenth-century thinkers, Dennis Rasmussen highlights Smith’s sympathy with Rousseau’s concerns and analyzes in depth the ways in which Smith crafted his arguments to defend commercial society against these charges. These arguments, Rasmussen emphasizes, were pragmatic in nature, not ideological: it was Smith’s view that, all things considered, commercial society offered more benefits than the alternatives.

Just because of this pragmatic orientation, Smith’s approach can be useful to us in assessing the pros and cons of commercial society today and thus contributes to a debate that is too much dominated by both dogmatic critics and doctrinaire champions of our modern commercial society.

“We have hitherto lacked a systematic and sophisticated book-length analysis of the relation between Smith and Rousseau. . . . Dennis Rasmussen’s beautifully written book will be important reading for anyone concerned with these two figures, and more broadly the Enlightenment and its critics.”—Charles Griswold, Boston University

“Rasmussen has produced a concise, carefully organized, and insightful work that illuminates the thought of Rousseau and Adam Smith.”—M. Coulter, Choice

“In this lucidly written study, Dennis Rasmussen argues that a comprehensive consideration of Adam Smith must engage with the question of Jean-Jacques Rousseau’s influence. And while others have already suggested this influence, Rasmussen offers what will likely be the definitive account of Smith’s grappling with Rousseau for years to come. He presents systematic and compelling evidence to defend the hypothesis that Smith was deeply affected by Rousseau’s deconstruction of commercial society.”—David Lay Williams, Political Studies Review

Dennis C. Rasmussen is Assistant Professor of Political Science at the University of Houston.

3. The European Peasant and the Prudent Man