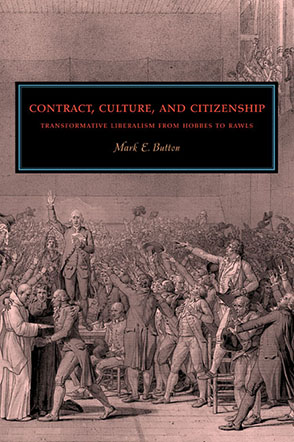 “Button argues that ‘contract makes citizens,’ rather than vice versa. He provides no less than a reexamination of the major texts in social contract theory—including those of Hobbes, Locke, and Rousseau—emphasizing the importance within this tradition of a ‘transformative’ and deeply educative project. An excellent book: fresh, original, clearly written and cogently argued, and based on an impressively wide array of sources. This book deserves a wide readership.”—Stephen Macedo, Princeton University

The idea of the social contract has typically been seen in political theory as legitimating the exercise of governmental power and creating the moral basis for political order. Mark Button wants to draw our attention to an equally crucial, but seldom emphasized, role for the social contract: its educative function in cultivating the habits and virtues that citizens need to fulfill the promises that the social contract represents.

Button’s interest in recovering this theme from past political theory is not merely historical, however. He means to resurrect our concern for it so that we can better understand the political-institutional and cultural-ethical conditions necessary for balancing individual freedom and common citizenship in our modern world of moral pluralism. Drawing on the history of public reason, Button shows how political justification continues to depend upon an ethics of character formation and why this matters for citizens today.

“Button argues that ‘contract makes citizens,’ rather than vice versa. He provides no less than a reexamination of the major texts in social contract theory—including those of Hobbes, Locke, and Rousseau—emphasizing the importance within this tradition of a ‘transformative’ and deeply educative project. An excellent book: fresh, original, clearly written and cogently argued, and based on an impressively wide array of sources. This book deserves a wide readership.”—Stephen Macedo, Princeton University

Mark Button is Associate Professor of Political Science at the University of Utah.

1. “Where Justice Is Called a Virtue”: Public Reason and Civic Formation in Thomas Hobbes

2. Compact Before Liberal Constructivism: The Divine Politics of John Locke

Conclusion: The Politics of Not Settling Down

All political business is, and always has been, transacted within an elaborate framework of ties and bonds for the future—such as laws and constitutions, treaties and alliances—all of which derive in the last instance from the faculty to promise and to keep promises in the face of the essential uncertainties of the future.

—Hannah Arendt, Between Past and Future

Theories of the social contract are stories about the origins of life in political society. They are stories that recount how and for what purposes diverse peoples might have come to live together, and remain living together, in those uniquely unnatural arrangements we call states. Like any good story, these are works of creative license, full of imagination, phantasmagoria, light and darkness, specters to move the heart, shape the mind, and form the will. As a moral and political narrative, the social contract provides its readers a framework with which to understand the world around them and their place within it—of whence they have come and whither they are going. Like any story that is told and retold by a host of different authors, writing within a wide range of different historical circumstances and for diverse audiences, the very prominence of the story amid the diversity of its retelling is an index to a broad set of social, political, and cultural developments to which the story is both testimony and agent. Some of the important developments that the modern contract story both announces and helps accelerate include widespread beliefs in the natural liberty and equality of persons, and the corresponding understanding of political societies as artificial and contingent; the inviolability and moral significance of private conscience and natural rights, and the corresponding denaturalization and gradual de-centering of singular, authoritative ways of being; the moral legitimacy of those political orders secured by the consent of the governed, and the corresponding right and duty of a people to “throw off governments” destructive of these commitments. This partial list helps to reveal that even as past and present critics have questioned the credibility and usefulness of this tale, the landscape the social contract story imaginatively invokes and constitutes is the moral and political terrain of both the present and the foreseeable (desirable) future.

Thus, to offer a new interpretation of this archetypal story, as I aim to do in this book, is in part a hermeneutical task that ineluctably confronts some of the most fundamental features of Western moral and political life. Since so much of our present moral and political self-understanding is drawn from the modern social contract tradition, the historical dimensions of this book also provide an account of the political, cultural, and ethical lineages of contemporary citizenship and government. And if my reading of the historical significance of narrative retelling is correct, then offering new ways of reconsidering this story may also provide new ways of thinking and acting in accordance with the moral and political frame that the social contract story continues to shape and inform. Every contract story is both interpretive and normative in nature, offering a language and a framework of moral and civic self-understanding alongside a vision of the just and proper ends that political societies ought to pursue. This book operates on both of these registers (the interpretive and the normative) as well. I write in the conviction that two of the most important tasks for political theory today are to sustain critical attention toward the streams of thought that have shaped our political culture in fundamental ways, and, by sifting through the rich and strange deposits carried along by these currents, to continuously work out normative possibilities and practical strategies for moral and political life for both present and future generations.

The Time of Popular Sovereignty

Process and the Democratic State

Transforming the Social Contract in India

The Australian Citizens’ Parliament and the Future of Deliberative Democracy