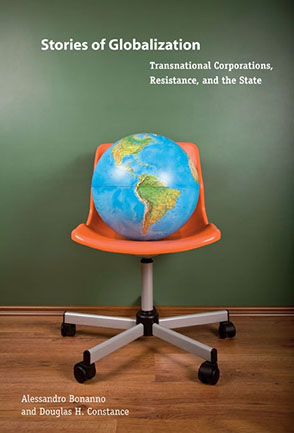 “Stories of Globalization is an important reference for any professional for whom food is a subject of study in a globalizing context. It belongs in any library, whether academic, corporate, or public.”—Heather Hunwick, Gastronomica

The economic and social outcomes of mid-twentieth-century Fordist capitalism were characterized by a decrease in the significance of distance and a shift in the dynamic of time. This “time-space compression” is one of the defining components of contemporary globalization. In their latest collaboration, Alessandro Bonanno and Douglas Constance provide an in-depth analysis of the origins and nature of globalization using the context of the agro-food sector, one of the most globalized socioeconomic sectors in the world.

Breaking from widely used methodologies in the study of globalization, Bonanno and Constance argue that the shifting dynamic of space and time has created a new capitalism that is qualitatively different from capitalism inspired by patterns of international relations established throughout the nineteenth and early twentieth centuries. The book provides an extensive and original review of existing literature and is centered on eight specific case studies. Through the analysis of these “stories of globalization,” the authors examine how the origins of and interactions between transnational corporations, groups that resist these organizations, and the state have given birth to a contemporary understanding of globalization. They use this new understanding to analyze globalization as a contested terrain in which the power of transnational corporations is affected by mounting opposition and internal contradictions.

“Stories of Globalization is an important reference for any professional for whom food is a subject of study in a globalizing context. It belongs in any library, whether academic, corporate, or public.”—Heather Hunwick, Gastronomica

Alessandro Bonanno is Professor and Chair of the Department of Sociology at Sam Houston State University.

1. Globalization of the Economy and Society: Salient Interpretations

3. Transnational Corporations and Their Power over the State: The Case of Ferruzzi

4. Corporate Power and the Free Global Market: The Lysine Price-Fixing Case of ADM

5. Globalization and Resistance from Below: The Case of Industrial Chicken Production in Southeast Texas

6. TNCs’ Colonization of the Local and Resistance: Mega Hog Farms in the Texas Panhandle

7. Old and New Social Movements in the Global Era: The Case of Maxxam and the Headwaters Forest Redwoods

9. Challenging the Globalization Project: The Collapse of the Multilateral Agreement on Investment

This book has two objectives. The first is to present salient aspects of globalization in a way that is accessible to readers who are not necessarily familiar with this subject. We wanted to write a book that was both scientifically sound and also accessible to those who are not necessarily experts in globalization studies. Our decision does not imply that this manuscript cannot appeal to more experienced scholars. We believe that the wealth of empirical data and the analysis and narrative presented in the text offer relevant insights to those who have been following the social science debate on globalization closely. Our second objective is to provide a general view of globalization by presenting eight specific cases—our “stories of globalization.” In the social sciences, this is known as a “case-study approach.” Knowledge of a particular scientific topic is established through in-depth analysis of one or more case studies.

In the case of globalization, most of the knowledge currently available has been generated through the use of macroanalyses based on quantitative aggregate data, and/or microinvestigations based on a single case study. Generally grounded in sociohistorical frameworks, these pieces of research have engendered a rich debate on the crisis of established socioeconomic and cultural arrangements and the emergence of new ones. In spite of their many positive contributions, however, these studies have not been immune to criticism. Macroquantitative analyses have often been attacked for their inability to analyze the social, historical, cultural, and geographical particularities of globalization, and for their tendency to dissolve heterogeneous experiences and conditions into far-reaching generalizations. Simultaneously, microanalyses have been criticized for generalizing specific cases to other settings and to society as a whole. In effect, the most common objection to qualitative microanalyses has been to their assumed limited capacity to extrapolate general tendencies from circumscribed observations.

While the limits of these macro- and microstudies are well known and have been addressed through a wealth of epistemological arguments, alternative approaches have infrequently been sought. Diverging from this tendency, this book employs an alternative qualitative approach that analyzes globalization through a collection of case studies. Our plan is to use these case studies to analyze selected aspects of globalization, and through them to offer pertinent generalizations. To be sure, this multiple-case-study approach has been employed in the past, but in edited books that featured contributions from a number of different authors. This book is different because it examines cases that we have researched and written ourselves; and it is the culmination of our long collaboration in the study of globalization.

This collaboration began with the study of transnational corporations’ use of hypermobility to avoid local environmental and food safety laws and continued with cases that shed light on the power and limits of transnational corporations, the role and changing nature of the nation-state, the resistance of local and translocal groups to global forces, the implications of these phenomena for the future of society, and other topics debated in the globalization literature. We have focused on the agriculture and food sector, arguably one of the most globalized sectors in contemporary society. While originally designed as self-contained studies—and many of them have been published previously as journal articles —these cases have been reorganized, updated, and rewritten to provide a fresh source of information qualitatively different from the simple sum of the individual research projects.

New Examinations of Global Power and Its Alternatives