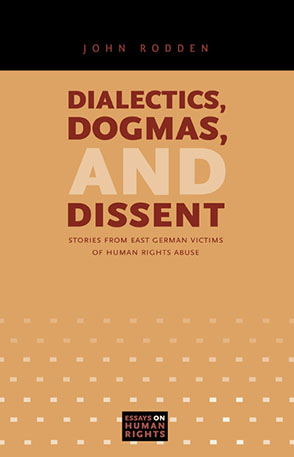 “John Rodden is turning into the Studs Terkel of the GDR, a patient interlocutor who gets people talking and asks the probing question when it is needed. As time goes on, and both lives and memories fade, this kind of oral history record becomes increasingly valuable.”—Randall Bytwerk, Calvin College

Germany underwent two periods of dictatorial repression in the twentieth century, first under Hitler and the Nazis in the late 1930s and early 1940s and then under the communist German Democratic Republic from 1945 until the Berlin Wall fell in 1989. The abuses of human rights under the Nazis are well known and now abundantly documented. The abuses that occurred during the period of the GDR, however, are not so well known and are poorly documented.

Through his interviews with survivors of GDR repression, John Rodden seeks to add to the history of this dark period. He reveals the many different ways in which ordinary people suffered at the hands of a brutal regime and its secret police enforcers, the Stasi. Some presented here are heroes; some are survivors, including those who played along to get along. As one teacher who conformed to stay safe admitted to Rodden, “It was a nation that, by cutting us off from the truth, made cowards of us all.”

“John Rodden is turning into the Studs Terkel of the GDR, a patient interlocutor who gets people talking and asks the probing question when it is needed. As time goes on, and both lives and memories fade, this kind of oral history record becomes increasingly valuable.”—Randall Bytwerk, Calvin College

1. Of Pigs and Poison Shelves

2. “Big Brother Was Watching Me”

Part 2 Rosy Dogmas, or Barbarism with a Human Face

Part 3 Courageous Dissent, or the Grit and Grace of Public Heroics

5. Revolutionary in Love with the Past

6. The Galileo of the GDR

The inspiration for this book came from my visceral and unforgettable encounters with victims of human rights abuse under the dictatorship of the former German Democratic Republic (GDR), most of whom I met in August 2003 at the international George Orwell Centenary Conference held at the Haus der Zukunft in Berlin. Titled “Bücher, die ins Zuchthaus führten” (Books That Led to Jail), the conference featured the harrowing, Orwellian stories of several East Germans who were unacknowledged, but genuine, martyrs of communist injustice in the GDR. Their stories so moved and humbled me that I subsequently accompanied three of these former inmates of East German prisons to visit one of the GDR’s most notorious centers of interrogation and incarceration, the infamous “Camp X” in Hohenschönhausen in eastern Berlin. Because these men generously vouchsafed me the privilege of seeing the prison and its torture chambers through their own eyes and hearts and memories—a searing experience that I will never forget—I remained in contact with them and even solicited their painful stories for this collection.

Among the portraits and interviews to which I have devoted separate chapters in the book are those of two men who organized the Orwell symposium: Baldur Haase and Bernd Lippmann. Both of them had defied the ban on reading authors officially proscribed as “hostile to socialism,” such as George Orwell. For their teenage temerity, exemplified by their reading Nineteen Eighty-Four and Animal Farm, respectively, they were punished with jail sentences that not only robbed them of their youth but also darkened the decades that followed.

But their stories, which serve as East German counterparts to that of Winston Smith, are only two of the tragic tales that I heard at the Orwell conference in Berlin. All of the victims who shared their stories agreed that Nineteen Eighty-Four was an astonishingly accurate vision of the totalitarian state in which they themselves had lived and that Orwell’s conceptualization in his novel of the relevant issues—such as political persecution, privacy invasion, groupthink, and state censorship—resonated powerfully for them when they read it decades ago—as it still does for readers today.

“The GDR slipped comfortably and eagerly into the mantle that Orwell had held up before it,” stated Hans-Eberhardt Zahn, a Berlin psychiatrist who spent seven years in East German jails, including the secret police’s brutal Camp X. There, he himself experienced many of the brainwashing and torture techniques that the GDR experimented with during the 1950s and 1960s. Camp X’s techniques focused on mental manipulation rather than physical torture. Indeed, there was even a swimming pool and a well-stocked library. Zahn, who had just come from the decrepit, understaffed prison at Bautzen, was amazed at the luxury and at first believed that he was in a special facility for prisoners about to be released. Soon he learned about the underside of Camp X: the ceaseless interrogations and subtle psychoterror, the spies planted everywhere who sought to befriend him, the incessant efforts to tempt him and bait him to provide information and denounce other prisoners. Zahn realized that Camp X was an intensified version of the GDR itself: “Camp X was indeed a microcosm of the GDR.” When he proved to be largely unresponsive to these brainwashing techniques, he was transferred back to Bautzen—and, to his surprise, was relieved and extremely grateful.

Other speakers at the Orwell symposium addressed East German state policy specifically toward dissidents. For instance, Hans-Jürgen Grasemann of Braunschweig discussed how Article 27 of the constitution of the GDR dealt with freedom of speech and expression: “Every citizen of the GDR has the right to express his opinion freely and publicly within the scope of the laws of this constitution.” That qualification—“within the scope of the laws of this constitution”—so compromised the assertion of freedom as to overwhelm it. This formulation was strategically employed against everything that did not safely conform to the dictatorship’s narrow conception of state socialism. Article 27 proved to be a perfectly ironic statement of one of the tenets of Big Brother and Oceania: “FREEDOM IS SLAVERY.”

A Polish participant in the George Orwell Centenary Conference compared Kafka’s The Trial to Orwell’s Nineteen Eighty-Four, noting that the totalitarian vision really has no need to keep track of “proles” and may reserve its scrutiny for well-placed Party members. “The power apparatus of the totalitarian state,” argued Karol Sauerland of Warsaw, “regards the individual as merely a statistic. He or she is much like an insect or an animal—and can be safely left unattended. No spies are really necessary to keep an eye on him.” Sauerland declared that during the years of communist rule in Poland, he was often asked secretly how many spies were required in order to spread angst and mistrust within a populace. He estimated that one spy per one thousand citizens sufficed to maintain the climate of fear on which a totalitarian system depends to intimidate its populace into submission.

In my own talk, I aimed to present the perspective of Orwell held by Americans in the English-speaking world to a German audience that saw him primarily as a cold warrior, a view held partly because the first two books by Orwell that appeared in German translation were Animal Farm and Nineteen Eighty-Four. As a result, Orwell became known during the early postwar era as the leading literary cold warrior of the West.

The past is indeed a foreign country, and many of the Orwell symposium participants lamented the fact that a younger generation of Germans and eastern Europeans know virtually nothing about the sufferings that thousands of their neighbors endured under the cold war dictatorships of the GDR and its eastern neighbors.

That ignorance reduces empathy and blocks genuine historical and political understanding. I myself can confirm how difficult it is to understand a historical period on the basis of written documents alone. It was invaluable for me to meet and converse with these former political prisoners in order to experience erlebte Geschichte (lived history), for it was my encounters with these men and women that brought their oft-forgotten experiences to life for me.

The portraits and interviews in this book, which are chiefly devoted to the stories of ordinary eastern Germans whom I interviewed during my travels since 1990 throughout the five eastern states, owe their existence to the fact that I could not work through my own experience of the SED dictatorship, even at a distance of thousands of miles and decades of history, without committing to paper my encounters with these indelibly memorable people. Several of them expressed to me that (thankfully!) Orwell ultimately “failed” as a political prophet—the nightmarish future that he envisioned has not come to pass—precisely because his warning proved so prescient and powerful. Yet they also emphasized that his warning nonetheless remains current and compelling. Moreover, they voiced concern that as the number of witnesses to Germany’s two twentieth-century dictatorships dwindles with the passing years, the political indifference of young people to their elders’ hardships and sufferings may prove impossible to overcome. For that reason, it is even more important to hear and honor the stories of these witnesses—and to record their narratives, while time still remains.