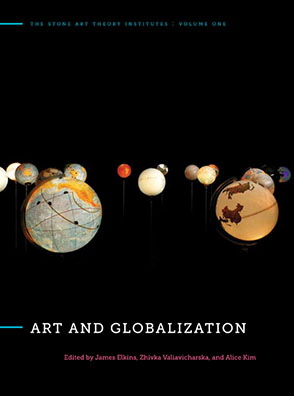 “In our era of biennales and international galleries, contemporary art compels both a new, wider analysis as well as a rethinking of basic forms and definitions. Presented in the form of dialogues, even debates, in transcript, followed by individual responses, Art and Globalization’s distillation of collective seminar discussions intends to open, rather than to close, its topics: considerations of both the recent history of visual culture toward some guiding theory of globalization and its consequences for art production and consumption across space rather than time. Readers should be alerted that this seminar will surely engage them as participants and partisans, sharpening their own personal responses to the contemporary art world, but without offering consistency, closure, or conclusions.”—Larry Silver, Farquhar Professor of Art History, University of Pennsylvania

The “biennale culture” now determines much of the art world. Literature on the worldwide dissemination of art assumes nationalism and ethnic identity, but rarely analyzes it. At the same time there is extensive theorizing about globalization in political theory, cultural studies, postcolonial theory, political economy, sociology, and anthropology. Art and Globalization brings political and cultural theorists together with writers and historians concerned specifically with the visual arts in order to test the limits of the conceptualization of the global in art.

Art and Globalization is the first book in the Stone Art Theory Institutes Series. The five volumes, each on a different theoretical issue in contemporary art, build on conversations held in intensive, weeklong closed meetings. Each volume begins with edited and annotated transcripts of those meetings, followed by assessments written by a wide community of artists, scholars, historians, theorists, and critics. The result is a series of well-informed, contentious, open-ended dialogues about the most difficult theoretical and philosophical problems we face in rethinking the arts today.

“In our era of biennales and international galleries, contemporary art compels both a new, wider analysis as well as a rethinking of basic forms and definitions. Presented in the form of dialogues, even debates, in transcript, followed by individual responses, Art and Globalization’s distillation of collective seminar discussions intends to open, rather than to close, its topics: considerations of both the recent history of visual culture toward some guiding theory of globalization and its consequences for art production and consumption across space rather than time. Readers should be alerted that this seminar will surely engage them as participants and partisans, sharpening their own personal responses to the contemporary art world, but without offering consistency, closure, or conclusions.”—Larry Silver, Farquhar Professor of Art History, University of Pennsylvania

“This multivoiced volume successfully evokes the vastness of artistic production on a global scale. The conversations, assessments, and programmatic introductions and afterword make it crystal clear that if art is to be understood in global terms, the tasks of conceptual clarification, concept development, and methodological innovation must be taken up with intelligence, honesty, and energy, and in a way that takes thinking about art well beyond the usual parochialisms.”—Mette Hjort, Chair Professor and Head, Visual Studies, Lingnan University, Hong Kong

James Elkins is Associate Professor in the Department of Art History, Theory, and Criticism at the School of the Art Institute of Chicago.

Zhivka Valiavicharska is a PhD candidate in the Rhetoric Department at the University of California, Berkeley.

Alice Kim is a PhD candidate in the Rhetoric Department at the University of California, Berkeley.

3. The Prehistory of Globalization

8. Four Failures of the Seminars

In the usual course of things, art theory happens invisibly, without attracting attention. Concepts like picture, visual art, and realism circulate in newspapers, galleries, and museums as if they were as obvious and natural as words like dog, cat, and goldfish. Art theory is the air the art world breathes, and it is breathed carelessly, without thought. It is the formless stuff out of which so many justifications are conjured. Art theory also happens in universities and art schools, where it is studied and nurtured like a rare orchid. And art theory happens in innumerable academic conferences, which are sometimes studded with insights but are more often provisional and inconclusive. In those academic settings, words like picture, visual art, and realism are treated like impossibly complicated machines whose workings can hardly be understood. Sometimes, then, what counts as art theory is simple and normal, and other times it seems to be the most difficult subject in visual art.

A similarity links these different ways of using theory. In the art world as in academia, it often feels right just to allude to a concept like picture, and let its flavor seep into the surrounding conversation. That is strange, because picture is so important to so many people, and the habit of using it so informally leads to wayward conversations. The books in this series are intended to push hard on that strangeness, by spending as much time as necessary on individual concepts and the texts that exemplify them. Some books are more or less dedicated to particular words: volume 1 focuses on globalization, translation, governmentality, and hybridity; volume 2 explores image, picture, icon, and iconophilia. Volume 3 is concerned with the idea that art is research, which produces knowledge. Volume 4 is about the aesthetic, the anti-aesthetic, and the political; and volume 5 concentrates on visual studies, visual culture, and visuality. This book series is like an interminable conversation around a dictionary—or like the world’s most prolix glossary of art. That isn’t to say that the purposes of these conversations is to fix meanings: on the contrary, the idea is to work hard enough so that what seemed obdurate and slippery, as Wittgenstein said, begins to fracture and crack.

Each book in this series started as a weeklong event, held in Chicago. No papers were given (except as evening lectures, which are not recorded in these books). For a week, five faculty and a group of twenty-five scholars met in closed seminars. In preparation for the week they had read over eight hundred pages of assigned texts. The week opened with a three-hour panel discussion among the faculty, continued with four and a half days of seminars (six hours each day), and ended with a five-hour panel discussion, open to the public. All thirty-five hours of it was taped and edited, and the pertinent portions presented here.

This series is a refinement of a previous book series called The Art Seminar, which appeared from 2005 to 2008. Like The Art Seminar, the Stone Art Theory Institutes are an attempt to record a new kind of art theory, one that is more inclusive and less coherent than some art theory produced in North America and western Europe since the advent of poststructuralism. The guiding idea is that theorizing on visual art has become increasingly formalized and narrow, even as art practices have become wildly diverse. Both book series are meant to capture a reasonable cross-section of thinking on a given topic, and both include people at the far ends of the spectrum of their subjects—so far from one another that in some cases they were reluctant even to sit together in the events, or participate in the books. Some conversations are genuinely dialectic, others are abrupt encounters, and still others are unaccountable misunderstandings. All those species of communication are recorded as faithfully as possible, because they are evidence of the state of understanding of each field.

The Introductions to each volume are meant as straightforward and clear reviews of the critical situation leading up to the seminars. The Art Seminar books then had a set of essays to help set the stage for the transcribed discussions. There are no essays in this series, because it is not possible to usefully condense the hundreds of pages of texts that informed these discussions. (References to most of those readings can be found in the transcripts.) The omission of essays makes this series more “difficult” than The Art Seminar, but the literature of art theory has grown beyond the point where it can be helpfully anthologized. The books in this series are not introductions to the various subjects they treat, but attempts to move forward given the current state of discourse in each field. In that they follow the lead of the sciences, where more advanced textbooks necessarily presuppose more introductory material.

After each year’s week-long event, the editors selected excerpts from the thirty-five hours of audio tapes and produced a rough-edited transcript. It was given to each of the participants, who were invited to edit their contributions and add references. After several rounds of editing, the transcript was sent out to people who did not attend the event. They were asked to write assessments, which appear here in the order they were received. The writers were asked to consider the conversation from a distance, noting its strengths and its blind spots, in any style and at any length. As the assessments came in, they were distributed to people who hadn’t yet completed theirs, so that later assessments could comment on earlier ones, building an intermittent conversation through the book. The Afterwords are intended principally to organize the ideas in the book, so they can resonate with future discussions.

One of the central concerns of this series is making talk about art more difficult. For some readers, art theory may seem too abstruse and technical, but at heart it has a different problem: it is too easy. Both the intricate art theory practiced in academies, and the nearly invisible theory that suffuses galleries and art fairs, are reasonably easy to do reasonably well. As Wittgenstein knew, the hardest problems are the ones that are right in front of us: picture, visual art, realism. The purpose of the books in this series is to do some damage to our sense that we understand words like those.

The Topics in this Series

Volume 1, Art and Globalization, is about writing in the “biennale culture” that now determines much of the art market. Literature on the worldwide dissemination of art assumes nationalism and ethnic identity, but rarely analyzes it. At the same time there is extensive theorizing about globalization in politics, postcolonial theory, sociology, and anthropology; volume 1 is an attempt to bring those discourses together with art-world concerns.

Volume 2, What Is an Image? asks how well we understand what we mean by picture and image. The art world depends on there being something special about the visual, but that something is seldom spelled out. The most interesting theorists of those fundamental words are not philosophers but art historians, and this book interrogates the major theories.

Volume 3, What Do Artists Know? is about the education of artists. The MFA degree is notoriously poorly conceptualized, and now it is giving was to the PhD in art practice. Meanwhile, conversations on freshman courses in studio art continue to be bogged down by conflicting agendas. This book is about the theories that underwrite art education at all levels.

Volume 4, Beyond the Anti-aesthetic, is about the fact that now, almost thirty years after Hal Foster defined the anti-aesthetic, there is still no viable alternative to the dichotomy between aesthetics and anti- or nonaesthetic art. The impasse is made more difficult by the proliferation of identity politics, and it is made less negotiable by the hegemony of anti-aesthetics in academic discourse on art.

Volume 5, Farewell to Visual Studies, is a forum on the state of the once-new discipline (inaugurated in the early 1990s) that promised to be the site for the study of visuality in all fields, inside and outside of art. Despite the increasing number of departments worldwide, visual studies remains a minority interest with an increasingly predictable set of interpretive agendas and subjects. Hence our farewell.

What Is an Image?

What Do Artists Know?

Beyond the Aesthetic and the Anti-Aesthetic

Our Beautiful, Dry, and Distant Texts