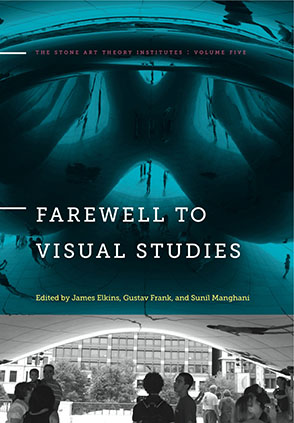 “Farewell to Visual Studies is astonishing and impressive. It opens the field to self-critical questions about its history, objects, and methods (in contrast to art history and German Bildwissenschaft). The statements of the editors at the beginning, the open-minded and self-critical discussion among the participants in the Chicago Seminars, and the contributions of the experts at the end deliver a deep impression of how such a self-assessment may lead to new shores.”—Martina Sauer, Deutsche Gesellschaft für Semiotik (DGS)

Each of the five volumes in the Stone Art Theory Institutes series brings together a range of scholars who are not always directly familiar with one another’s work. The outcome of each of these convergences is an extensive and “unpredictable conversation” on knotty and provocative issues about art.

This fifth and final volume in the series focuses on the identity, nature, and future of visual studies, discussing critical questions about its history, objects, and methods. The contributors question the canon of literature of visual studies and the place of visual studies with relation to theories of vision, visuality, epistemology, politics, and art history, giving voice to a variety of inter- and transdisciplinary perspectives. Rather than dismissing visual studies, as its provocative title might suggest, this volume aims to engage a critical discussion of the state of visual studies today, how it might move forward, and what it might leave behind to evolve in productive ways.

“Farewell to Visual Studies is astonishing and impressive. It opens the field to self-critical questions about its history, objects, and methods (in contrast to art history and German Bildwissenschaft). The statements of the editors at the beginning, the open-minded and self-critical discussion among the participants in the Chicago Seminars, and the contributions of the experts at the end deliver a deep impression of how such a self-assessment may lead to new shores.”—Martina Sauer, Deutsche Gesellschaft für Semiotik (DGS)

“In looking back at the whole field of visual studies, the collection offers a lively contribution to the history of the inter/trans/in/discipline. It is a wonderful example of how understanding and new thinking are produced by performing intellectual clarification and innovation on the page, giving readers the sense of mediated participation in the Stone Center Seminars.”—Jon Simons, Indiana University Bloomington

James Elkins is E. C. Chadbourne Professor in the Department of Art History, Theory, and Criticism at the School of the Art Institute of Chicago.

Gustav Frank is Professor of German at the Ludwig Maximilian University of Munich.

Sunil Manghani is Reader in Critical and Cultural Theory at the University of Southampton.

Second Introduction: Affect, Agency, and Aporia: An Indiscipline with Endemic Ambivalences and a Lack of Pictures

Third Introduction: Visual Studies, or, This is Not a Diagram

7 A General Theory of Visual Culture

10 The Place of the Image

This text is adapted from the introductory lecture, given on July 17, 2011.

Why Farewell to Visual Studies? Our title is meant to raise the question of visual studies’ successes and failures, and to promote a critical orientation in a field that has, until now, often been content about its accomplishments and its history. The three of us who organized the event and edited this book have very different senses of what needs rethinking, what is promising, and what might be left behind. In this brief introduction I will list some of my own concerns, things that were on my mind when I first named and advertised this event in 2006. Some of them appear in the pages that follow; others don’t, and that’s how it should be. Each of the thirty people involved in the 2011 event, and the twenty additional writers who have contributed Assessments to this book, have different senses of visual studies. As in the other books in this series, the idea is to give voice to as many perspectives as possible, and not to constrain critical discourse.

I like to think we are now in the third generation of visual studies. The people who founded the first Anglo-American programs of visual studies are in their late fifties, sixties, and seventies: Tom Mitchell, Douglas Crimp, Michael Holly, Keith Moxey, Janet Wolff. Their first students are now well established—people like Lev Manovich and Howard Singerman. I think of all those scholars, and many others I’m not naming, as part of a single generation. I am in the same group, except that I wasn’t trained by anyone engaged with visual studies. A second generation, now in their thirties, forties, and early fifties, are the later students of those scholars. In this event, we had Bridget Cooks and Jeanette Roan, both graduates of the Rochester program, and now teaching in Irvine and the California College of the Arts. Sunil Manghani, one of the faculty, would perhaps be part of that group as well, and so would Gustav Frank, even though he was trained in literary history. This kind of schema is of course impossible to sustain, as Wilhelm Pinder discovered (he attempted to write a history of art by generations), but I propose it in order to say that there is a third group, a third generation, people now in their twenties and early thirties: current graduate students. In my experience, their concerns are nearly disconnected from the concerns that animate our discussions here. I raise that point several times in the Seminars, just to signal that the concerns about history, politics, and visuality are often put in ways that make more sense to the first- and second-generation scholars than the current generation.

This was echoed in an interesting way in a book I was editing when the Farewell to Visual Studies event was in progress; it has since been published as Theorizing Visual Studies: Thinking Through the Discipline (2012). That book is composed of seventy short chapters, all written by graduate students around the world. My coeditors were also graduate students at the time we assembled the book. The idea was to produce a next-generation reader for visual studies that did not depend on midcareer scholars. My contributions were limited to the introductory material. One introduction was an essay on the history of visual studies, which has a fair amount of detail (including a number of texts and institutions that are not mentioned in this book). I wrote it around the time of the Farewell to Visual Studies event, well before we had gathered all seventy chapters for the book. It turned out that overwhelmingly, the graduate student authors were not interested in the deeper history of their discipline. I thought that was striking, and I decided to publish the introduction anyway, with the title “An Introduction to the Visual Studies That Is Not in This Book.” The graduate students’ interests, their sense of visual studies’ history, their favorite theorists, their preferred journals and zines, and their central visual practices, artists, and objects are significantly different from what we talk about in these pages.

I have a list of things I’d like to say farewell to, and another list of visual studies’ unfulfilled promises. Farewells and absences. Here they are, in no particular order. Most of them are expanded in my Visual Studies: A Skeptical Introduction. Even though that book was written in 2002 and published in 2003, I would defend most of its points—I think they still remain unsolved problems for the field.

(1) Visual studies should be harder to do. At one point in the Seminars, Keith Moxey quotes the end of my book, to the effect that I would like visual studies to be more ambitious, more wide-ranging, more difficult, slower, and less self-assured. I still find the majority of the writing in visual studies to be too easy, by which I mean it is not difficult enough to write an essay that is fit for publication. It would be good, I think, if visual studies interpretations, no matter what their methodologies, purposes, tactics, or strategies—we distinguish those in the Seminars—would stumble over their assumptions, hesitate over their terms, ponder their formal and contextual analyses. I would like interpretations to slow, perhaps not to the extreme of writers like Joseph Koerner, Tim Clark, or Georges Didi-Huberman (their slownesses are products of different disciplinary concerns), but at least to the point where the author’s voice can emerge, questioning her own thoughts and the adequacy of her writing. Farewell, then, to essays that are not as challenging as they possibly can be. I prefer my essays to be uncertain, wavering, obdurately difficult, and rewarding on several rereadings.

(2) Visual studies continues to depend on a relatively small, fairly fixed set of theorists. When I wrote this in 2003, I was thinking of Lacan, Foucault, Marx, Benjamin, Butler, and Barthes, and they are still as prominent. Now the list would include Rancière, Badiou, Bourriaud, Muñoz, and Malabou, but the general configuration is similar. I wonder how different visual studies would look if it adopted Hugo Münsterberg or Béla Balázs (both are mentioned in the Seminars), or contemporaries such as Hermann Broch. And why not stray further away? In the book I proposed writing on some subject of topical interest using Ranke, Burckhardt, Mario Praz or Waldemar Deonna, Henri Frankfort, Elias Canetti or Robert Musil, Fernando Pessoa or Ludwig Hohl, Giambattista Vico or Giordano Bruno? Why not take our cues in gender theory from Sor Juana Iñes de la Cruz instead of Butler, Muñoz, or Irigaray? There are everyday reasons why this might not work, and it isn’t a good strategy if you don’t have a permanent teaching position. But that doesn’t mean the field as a whole can’t stray beyond Benjamin. Farewell, then, to Benjamin, at least for a while.

(3) Visual studies continues to look mainly at modern and contemporary visualities. This is explored in the Seminars by Michael Holly, Keith Moxey, Whitney Davis, and Gustav Frank. As Michael Holly notes, it appeared at first that visual studies would combine new theories with visual objects from all cultures, and especially from the premodern West. It has not turned out that way. The overwhelming majority of dissertations that engage visual studies are concerned with art from modernism onward. Visual studies has evolved a more or less predictable canon of interests, which includes popular imagery, kitsch, and camp, mixed with some contemporary art. Its one medium whose history extends back before modernism is photography, for reasons that we explore in the Seminars. Ideally, visual studies would be interested equally in art, and visual practices, from any culture or period. It shouldn’t have a flavor or a taste: it should range over the visual without prior aesthetic commitments. So, farewell to the usual subjects. Let’s write on something new: the world is filled with objects beyond our current interests.

What Is an Image?

What Do Artists Know?

Beyond the Aesthetic and the Anti-Aesthetic