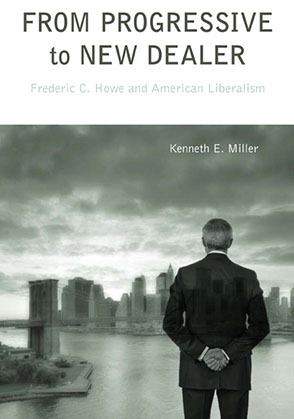 A native Pennsylvanian, born in Meadville in 1867 and a graduate of Allegheny College, Frederic Howe dedicated his life early on to the cause of improving society and played a major role in many movements for progressive change from the early 1890s to the Second World War—the period that Richard Hofstadter famously dubbed the “age of reform.” Howe was a fighter against corruption and political bosses in Cleveland; a leader in Progressive politics in New York City; a spokesman for reform through numerous books and articles and as director of the Cooper Union’s People’s Institute; an ardent campaigner for “Fighting Bob” La Follette, Woodrow Wilson, Al Smith, and Franklin D. Roosevelt; a defender of immigrants and civil liberties as commissioner of immigration for the Port of New York during the First World War; and an advocate for consumers as the first consumers counsel in the New Deal. Kenneth Miller’s biography takes the reader behind the scenes and shows how “the great game of politics” was played in the age of reform.

“Kenneth E. Miller’s From Progressive to New Dealer is an indispensable analysis of a significant progressive intellectual reformer whose first book, The City: The Hope of Democracy, was published more than a century ago in 1905. . . . Readers interested in the varieties of progressive reform thought from 1900 to Howe’s death in 1940 will find this a compelling biography.”—Frank Annunziata, Journal of American History

Fred Howe was an unabashed liberal. “All of my activities have been part of a lifelong interest in the changing and improving of conditions that result in suffering or injustice,” he wrote. “I hesitate to give a name to something that has been instinctive in me; whether it should be called the spirit of reform, or hu manitarianism, or sentimentality, or the dreaming of dreams, or the seeing of visions depends entirely on the way one looks at life.” His beliefs and convictions led him to join in nearly every movement for political and economic change during the period Richard Hofstadter called the “age of reform”—from about 1890 to the Second World War—when the quest for reform largely dominated American politics.

In the course of reform battles over more than fifty years, Howe’s path crossed those of the leading men and women of his time. As a graduate student at the Johns Hopkins University, he learned from Woodrow Wilson, Richard Ely, Albert Shaw, Herbert Baxter Adams, and Lord Bryce. He fought for municipal reform alongside Tom Johnson, Newton Baker, Brand Whitlock, and Lincoln Steffens. He was immersed in the politics of progressivism with Bob La Follette, Louis Brandeis, William Allen White, Walter Lippmann, Amos Pinchot, and Ben Lindsey. He served as Wilson’s commissioner of immigration at Ellis Island in wartime, was present for the peacemaking at Versailles, and during the postwar “Red Scare” was harried by hostile congressmen and spied on by the minions of J. Edgar Hoover. A stalwart defender of freedom of speech (though himself involved in movie censorship), he worked with Roger Baldwin and Oswald Garrison Villard and was in on the founding of the American Civil Liberties Union. He was a strong and tenacious defender of the rights of alien radicals detained without trial at Ellis Island, especially of their right to a fair hearing on the charges against them.

Howe was in the midst of the battles in the presidential campaigns of Wilson, La Follette, Al Smith, and Franklin D. Roosevelt. Fighting for mainstream feminist causes alongside Charlotte Perkins Gilman, Jane Addams, Lillian Wald, and Crystal Eastman, Howe also worked with those who were further to the left, like Emma Goldman and Elizabeth Gurley Flynn. In the 1920s his School of Opinion on Nantucket acquainted him not only with the nation’s leading social scientists but also with such writers and artists as Sinclair Lewis and Gutzon Borglum. In the 1930s he defended consumers as the AAA’s first consumer counsel; served with Henry Wallace, Rexford Tugwell, Jerome Frank, Pat Jackson, and Alger Hiss; and came to admire, and occasionally advise, such disparate figures as Franklin and Eleanor Roosevelt, on the one hand, and Douglas MacArthur, on the other.

Frederic Howe was no Roosevelt, La Follette, or Wilson. His own ambitions did not reach toward the higher offices in the land, and his attempts at winning lesser elective offices for himself were limited and not very successful. Much of his work was done behind the scenes: organizing, advising, helping in campaigns, raising money, building networks, lobbying, publicizing and promoting policies. People like Howe have sometimes been called “second-line” progressives; but, as Eugene M. Tobin has pointed out, “they should more accurately and deservedly be placed in the front line because they were the heart, soul, and conscience of political liberalism.” Wherever there was a major movement for reform from the 1890s through the 1930s, there was Fred Howe, in the vanguard of the battle.

Howe was not always a liberal (a word he tended to use interchangeably with “progressive” and, sometimes, with “radical”). He grew up in a small town in northwestern Pennsylvania, which he described as “Republican in politics, careful in conduct, Methodist in religion,” where “watchful eyes observed us in all we did. There was a sense of being clamped down, stiff in a mould made for one.” He thought he had been liberated from the “small-town herd” and its “evangelistic morality” by his studies at Johns Hopkins, but he worried at various stages of his life that he had only substituted one set of authorities for another. Only when he had learned really to think for himself and to follow his own instinctive desires did he consider that he was truly free. In a lifelong process of what he called “unlearning,” Howe moved from a simple faith in the regeneration of politics by the entry of good men to an advocacy of government action at all levels against the forces of privilege, and from a trust in the enlightened businessman to an embrace of labor, co-operatives, and a mixed economy with large doses of public ownership. Unlike other progressives who fell by the wayside in the 1920s and 1930s, he remained a reformer, despite a growing disillusion with the course of the American system. His wife, Marie Jenney Howe, was also a reformer, considered by some to be more radical in her beliefs than her husband. After a brief career as a Unitarian minister prior to their marriage, she devoted her Cleveland years to work for consumers, women trade unionists, and social settlements, and her New York years to the woman suffrage movement. In New York City she founded, and for many years led, Heterodoxy, “a consciousness-raising group before the term was invented,” a center of prewar feminism. In the 1920s Marie withdrew from the political scene and turned her attention to French literature and especially to the life and writings of George Sand. Her story is an integral part of Fred’s.

Howe was a figure of importance and stature among liberals during the age of reform. He was one of those who moved beyond muckraking and developed, in Robert Wiebe’s words, “a more sophisticated, interpretive literature.” Men like Howe encouraged local progressives to see themselves as part of one great cause. Combining his political activism with his scholarly interests, he wrote 17 books and at least 120 articles, pamphlets, and reports on subjects that included city government, municipal reform, town planning, tax policy, cooperatives, reform of the political structure, international relations, immigration, agriculture, war and imperialism, the League of Nations, woman suffrage, and consumer protection. Familiar with local and national governments in Europe, he helped bring knowledge of their economic and social policies to American reformers and to the general public through his many writings about developments in Britain, Germany, Denmark, Switzerland, and France. “In the Old World, Frederic Howe and his friends beheld a vision of the future—and it worked.” His work exemplified the wide-ranging interests of the reformer’s mind, as well as the problems and dilemmas of those who seek change. His life revealed the variety of choices that reformers of his time had to make, as well as the outcomes and ramifications of some of those choices.

Howe was in the mainstream of American reform for half a century. His intellectual and political pilgrimage through two of the great periods of change in America—the progressive era and the New Deal—shows one man’s efforts to answer the important and continuing questions of policy and politics.

The Struggle for Urban Participatory Democracy During the Progressive Era