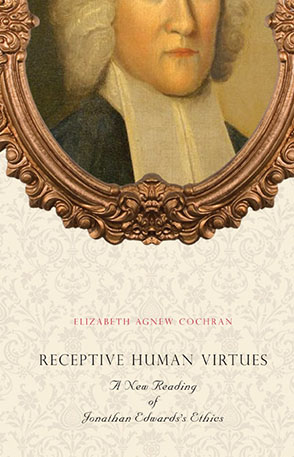 “Elizabeth Agnew Cochran’s examination of Jonathan Edwards and the human virtues engages questions of interest both to contemporary ethicists and to historians of eighteenth-century American and British thought. No other scholar has focused so intently on Edwards’s views of the human virtues or illustrated so carefully the problems inherent in their articulation in his theology or the solutions he devised to overcome those problems. The style is lucid and unpretentious, and Cochran contributes to a lively continuing conversation among ethicists and historians about the plausibility of an ethics of virtue in a Christian moral theology. By arguing skillfully that an ethics of virtue can have, as it did for Edwards, Christian rather than exclusively Aristotelian presuppositions, she stakes out a forceful position in a continuing debate.”—E. Brooks Holifield, Charles Howard Candler Professor, Emory University

This book offers a new reading of Jonathan Edwards’s virtue ethic that examines a range of qualities Edwards identifies as “virtues” and considers their importance for contemporary ethics. Each of Edwards’s human virtues is “receptive” in nature: humans acquire the virtues through receiving divine grace, and therefore depend utterly on Edwards’s God for virtue’s acquisition. By contending that humans remain authentic moral agents even as they are unable to attain virtue apart from his God’s assistance, Edwards challenges contemporary conceptions of moral responsibility, which tend to emphasize human autonomy as a central part of accountability.

“Elizabeth Agnew Cochran’s examination of Jonathan Edwards and the human virtues engages questions of interest both to contemporary ethicists and to historians of eighteenth-century American and British thought. No other scholar has focused so intently on Edwards’s views of the human virtues or illustrated so carefully the problems inherent in their articulation in his theology or the solutions he devised to overcome those problems. The style is lucid and unpretentious, and Cochran contributes to a lively continuing conversation among ethicists and historians about the plausibility of an ethics of virtue in a Christian moral theology. By arguing skillfully that an ethics of virtue can have, as it did for Edwards, Christian rather than exclusively Aristotelian presuppositions, she stakes out a forceful position in a continuing debate.”—E. Brooks Holifield, Charles Howard Candler Professor, Emory University

“Elizabeth Agnew Cochran offers very perceptive insights both into Edwards and into the value of Edwards for contemporary discussions of virtue ethics.”—George Marsden, University of Notre Dame

“Professor Cochran explicates with unprecedented clarity Edwards’s concern to balance an exalted vision of true virtue for the saints with a natural goodness available for cultivation more generally. She thus surprises by showing Edwards's God to be concerned with building not only a church shining with moral beauty but also a world of justice and civility. This sophisticated and elegant book will become an essential resource for all future studies of the ethics of America's theologian.”—Gerald R. McDermott, Roanoke College

“We have long recognized that Edwards played a key role in the development of American theology and religious life more generally, and in recent years a number of scholars have begun to re-examine his role in the formation of a distinctively American form of philosophy. Given his overall importance, it is hardly surprising that Edwards’s ethical writings, including his theory of virtue, have received sustained attention. At the same time, however, much of the recent work on Edwards’s virtue ethics has minimized its distinctiveness, by assimilating it to more familiar Aristotelian approaches, or taking it out of the wider context of Edwards’s other work, or both. In this book, Elizabeth Cochran offers a bold and much-needed corrective. In her view, Edwards understands the virtues properly so called to be attributes of God, and to be attributes of human persons only in a secondary sense. In order to make the case for this interpretation, she draws on the full range of Edwards’s theological writings, in addition to considering the leading philosophical thinkers who helped to frame the context of his thought. By doing so, she shows Edwards to be a sophisticated moral thinker, important in his own context, and potentially an interlocutor in our own debates over the virtues. In particular, this study will be welcomed by those moral philosophers who have recently attempted to retrieve broadly Platonic, exemplarist theories of the virtues. Cochran shows that this approach to virtue theory can claim at least one distinguished American predecessor in Edwards. Seen from the standpoint of contemporary advocates of an exemplarist account of virtues, Edwards is particularly important because his primary interlocutors are the ‘moral sense’ theorists of the seventeenth and eighteenth century, including David Hume—the ancestors of emotivist theories of virtue which currently constitute another central strand of virtue ethics. Yet Edwards engages directly with the moral sense theorists of his own day, showing how his exemplarist account offers a more satisfactory account of virtue than they can provide, even understood on their own terms. While the terms of the relevant debates have of course changed a great deal since Edwards’s day, he nonetheless offers contemporary philosophers some valuable insights into our current debates, and defenders of exemplarist theories of virtue will find him an unexpected, yet valuable ally.”—Jean Porter, University of Notre Dame

“To restore virtue to the heart of morality, today's theological ethicists retrieve and mine the works of Augustine and Aquinas, as well as their philosophical precursors, Plato and Aristotle. Into this pantheon of virtue ethicists, Elizabeth Agnew Cochran now proposes, from the New World, the Puritan Jonathan Edwards. This surprising proposal is completely convincing and satisfying. Cochran gives us not only a compelling key in which to read the great American theologian (Edwards scholars take note!), but also a contemporary notion of moral agency, humbly cognizant of human sinfulness as well as the call to responsibility and the need for grace. Cochran's refreshingly rich theological account makes the restoration of virtue ethics all the more probable by attending to, rather than ignoring, the Reformation. Brava!”—James F. Keenan, S.J., Boston College

1. An Ethic of Receptive Human Virtues

2. Love as Necessary and Volitional: Edwards’s Account of True Virtue in God

3. Charity as a Human Virtue: The Moral Accountability of a Necessary Nature

6. Justice and Partial Loves: The Natural Goodness of Incomplete Virtues

Twentieth-century virtue ethics emerged as an attempt to overcome perceived inadequacies in modern moral thought. This discipline has been characterized largely by a return to premodern texts: Aristotle in philosophical circles, Thomas Aquinas in theological circles, and Plato and Augustine in the more recent work of scholars such as Robert M. Adams and Eric Gregory. Theological ethicists are increasingly appreciative of Jonathan Edwards, but Edwards is not generally considered a major player in virtue ethics specifically. It is likely that Edwards has been neglected both because of his Enlightenment context and because, at first glance, many of his ethical writings appear to point toward a view of virtue similar to that of other modern thinkers. The Nature of True Virtue, particularly when separated from its counterpart text The End for Which God Created the World, seems to characterize true virtue as a singular quality, a narrow benevolence similar to the virtue of David Hume and Francis Hutcheson.

This book argues, however, that Edwards develops a careful and complex theory of the virtues, although he does not treat the virtues systematically. Moreover, Edwards’s understanding of the virtues is important for contemporary retrieval because it gives rise to a distinctive view of moral agency and accountability that runs counter to a Kantian tendency to celebrate the autonomous workings of a human will detached from the natural world. Edwards’s different virtues come together in the sixteenth sermon of A History of the Work of Redemption, which extols the virtues of the incarnate Jesus Christ. In this text, Edwards delineates multiple categories of virtues characteristic of human experience. Using Edwards’s sermon as a starting point, this book explores the conception of these virtues that Edwards develops in his broader corpus. In articulating his view of each sort of virtue, Edwards consistently affirms that the triune God is uniquely and supremely virtuous. At the same time, he offers a compelling and nuanced vision of a range of human virtues that speak to the multiplicity of moral experiences characteristic of human existence.

Edwards’s human virtues are “receptive”: we necessarily receive them from God, and in this sense an Edwardsean moral agent is never fully autonomous. But Edwards is simultaneously clear that humans are the authors of our own actions, and that we remain authentic moral agents even as our pursuit of the virtues depends fundamentally on God. Edwards radically redefines the character of human responsibility in a world that God providentially oversees. In doing this, Edwards implicitly constructs an ethic that in some ways runs counter to what we might expect of a theologian committed to traditional Reformed notions of original sin, election, and predestination; such a theologian, we might reason, is likely to limit moral agency to only a select few. Edwards’s ethic does limit true virtue to the elect, but his account of moral responsibility simultaneously functions to make the virtues more accessible to all people than do conceptions of the moral life based in the notion of human autonomy. Edwards’s virtues ground a vision of morality rooted in acknowledging the limitations all humans share, an acknowledgment that is paradoxically crucial to the realization of our human potential.