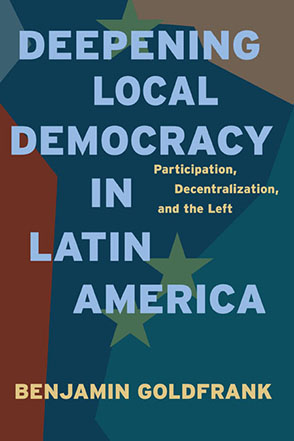 “Benjamin Goldfrank’s proposal to compare various leftist-sponsored experiments in collective participation in local decision-making represents a valuable contribution. . . . This book is an example of exceptional scholarship. It is well focused, explores the theoretical and practical implications of its findings and draws on extensive fieldwork and considerable secondary literature.”—Steve Ellner, Journal of Latin American Studies

The resurgence of the Left in Latin America over the past decade has been so notable that it has been called “the Pink Tide.” In recent years, regimes with leftist leaders have risen to power in Argentina, Bolivia, Brazil, Chile, Ecuador, El Salvador, Nicaragua, Uruguay, and Venezuela. What does this trend portend for the deepening of democracy in the region? Benjamin Goldfrank has been studying the development of participatory democracy in Latin America for many years, and this book represents the culmination of his empirical investigations in Brazil, Uruguay, and Venezuela. In order to understand why participatory democracy has succeeded better in some countries than in others, he examines the efforts in urban areas that have been undertaken in the cities of Porto Alegre, Montevideo, and Caracas. His findings suggest that success is related, most crucially, to how nationally centralized political authority is and how strongly institutionalized the opposition parties are in the local arenas.

“Benjamin Goldfrank’s proposal to compare various leftist-sponsored experiments in collective participation in local decision-making represents a valuable contribution. . . . This book is an example of exceptional scholarship. It is well focused, explores the theoretical and practical implications of its findings and draws on extensive fieldwork and considerable secondary literature.”—Steve Ellner, Journal of Latin American Studies

“This is a superb book, built on in-depth comparisons of local experiments with participatory processes in Venezuela, Uruguay, and Brazil, mainly in the 1990s. . . . Benjamin Goldfrank’s book should become a key reference on the deepening of local democracy in Latin America and beyond. . . .
“Beyond elaborating a compelling, well-substantiated, and substantively significant argument, this book helps to extend a literature that deserves continued attention. Goldfrank rightly recognizes the impressive works on participatory democracy in these cases individually, as well as comparative subnational work. . . .
“ . . . This book delivers on all counts. It will be referenced for its arguments, but it also deserves to be read as a book. It is a model for careful empirical work and theory building on questions of lasting and growing importance.”—J. Tyler Dickovick, Latin American Politics and Society

“An incisive and thorough analysis of the strengths and weaknesses of experiences of participatory democracy in contemporary Latin America.”—F. E. Panizza, The London School of Economics and Political Science

“Before leftist parties began electing presidents in Latin America at the turn of the century, they were electing mayors and experimenting with participatory forms of democracy at the municipal level. In this outstanding book, Benjamin Goldfrank explores the most important of these participatory experiments in Brazil, Uruguay, and Venezuela. Drawing from intensive field research and original public opinion surveys, Goldfrank analyzes why some participatory programs are more effective than others, and he carefully explains how these different outcomes relate to the institutional features of decentralization policies and the nature of partisan opposition. For anyone who seeks to understand the opportunities for—and the constraints on—the ‘deepening’ of democracy in contemporary Latin America, this insightful book is essential reading.”—Kenneth M. Roberts, Cornell University

“This volume is a well-researched comparative study of the empowerment of local citizens in the 1990s in three South American cities: Caracas, Venezuela; Montevideo, Uruguay; and Porto Alegre, Brazil.”—S. L. Rozman, Choice

“Goldfrank shows how participatory democracy's biggest challenges, including social inequality, bureaucratic inefficiency, and political rivalry, can be surmounted.”NACLA Report on the Americas

“Goldfrank has constructed an excellent and timely empirically grounded study into the emergence in the late 1980s and early 1990s of Latin American participatory innovations which resulted from attempts to deepen democracy by decentralising the vote for city mayors to the electorate. . . .
. . . Deepening Local Democracy in Latin America provides an insight into the development of the left as a result of decentralisation and participation, by providing a detailed, comparative account of how they were opposed, badly designed or successfully supported by a range of government parties. Furthermore, the extent to which the quality of democracy varied across the three cases is explored through the degrees to which participatory innovations were decentralised, the degree of opposition they had, and whether they had an open, regulated or restrictive design. In its empirical approach and theoretical underwriting, the work succeeds in providing a convincing insight into the various issues facing citizen participation in Latin America. . . . As Goldfrank applies his understanding of participation in Latin America more recently in the conclusion, his work stands as an excellent statement on deepening democracy in Latin America, as well as the obstacles this process can encounter.”—Adam Gill, Political Studies Review

“This is an impressive book and a major contribution to the debates about the direction of democracy and of the Left in Latin America.”—Alan Angell, Bulletin of Latin American Research

Benjamin Goldfrank is Assistant Professor at the Whitehead School of Diplomacy and International Relations at Seton Hall University.

2. A Tale of Three Cities

4. Montevideo: From Rousing to Regulating Participation

Conclusion: The Diffusion of Participatory Democracy and the Rise of the Left

Participation and the New Interest Regime in Latin America