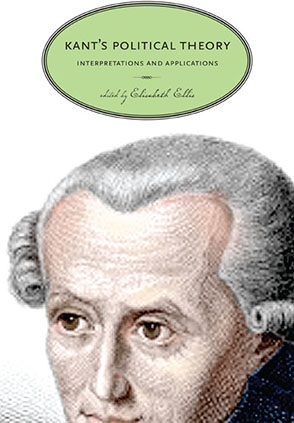 “Kant’s Political Theory is an impressive contemporary collection featuring some very distinguished contributors. Especially when brought together in one volume, these essays make important contributions to the literature on Kant's political philosophy.”—Larry D. Krasnoff, College of Charleston

Past interpreters of Kant’s thought seldom viewed his writings on politics as having much importance, especially in comparison with his writings on ethics, which (along with his major works, such as the Critique of Pure Reason) received the lion’s share of attention. But in recent years a new generation of scholars has revived interest in what Kant had to say about politics. From a position of engagement with today’s most pressing questions, this volume of essays offers a comprehensive introduction to Kant’s often misunderstood political thought. Covering the full range of sources of Kant’s political theory—including not only the Doctrine of Right, the Critiques, and the political essays but also Kant’s lectures and minor writings—the volume’s distinguished contributors demonstrate that Kant’s philosophy offers compelling positions that continue to inspire the best thinking on politics today.

“Kant’s Political Theory is an impressive contemporary collection featuring some very distinguished contributors. Especially when brought together in one volume, these essays make important contributions to the literature on Kant's political philosophy.”—Larry D. Krasnoff, College of Charleston

“One of the really remarkable aspects of political philosophy over the last three or four decades—spanning Arendtian, Habermasian, and Rawlsian theory—has been the stunning revival of interest in Kantian political thought. Elisabeth Ellis has put together a collection of essays featuring many of the most prominent and influential contributors to recent scholarship on Kant, thereby helping us appreciate why themes from Kantian political reflection (focusing on liberal justice and autonomy) are back on the radar screen of contemporary theorists and why they are very likely to remain there.”—Ronald Beiner, University of Toronto

“Kant's Political Theory consists of nine articles as well as one of the currently richest bibliographies on Kant's legal-political thought. . . . [T]he anthology provides a very good sense of the current variety of approaches to Kant's theory of justice.”—Helga Varden, Notre Dame Philosophical Reviews

“Kant’s Political Theory: Interpretations and Applications is a useful and thought-provoking read, no less for the proposed interpretations than for the applications of Kant’s theory. It is a welcome addition to the growing secondary literature on Kant’s legal philosophy.”—Alice Pinheiro Walla, International Dialogue

“This is a wonderful collection. . . . We owe the fine Kant scholar Elisabeth Ellis a debt of gratitude for bringing this collection together. . . . Together [the contributors] provide a fresh new look at Kant’s political philosophy that no scholar of the subject should be without.”—Samuel Fleischacker, Social Theory and Practice

“Kant’s Political Theory . . . ably demonstrates that Kant’s politics deserves close attention. The volume’s nine essays take up a variety of Kantian themes (e.g., the nature and basis of justice, freedom and international community, and education) and helpfully illuminate them from different perspectives (e.g., philosophical, interpretive/textual, and historical). . . . All the essays are excellent, and many contain fresh, insightful readings of even the most familiar texts.”—J. Church, Choice

1 Kant and the Social Contract Tradition

2 Kant and the Circumstances of Justice

3 Is Kant’s Rechtslehre a “Comprehensive Liberalism”?

4 Realizing External Freedom: The Kantian Argument for a World State

5 The Progress of Absolutism in Kant’s Essay “What Is Enlightenment?”

9 Kant, Freedom of the Press, and Book Piracy

A Counterpoint to Modernity

Kant's Theory of A Priori Knowledge