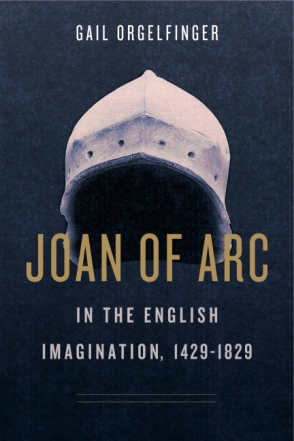 “Orgelfinger’s work is a thoroughly researched and welcome addition to the scholarship on the post-medieval reception of Joan of Arc. She offers valuable new insights by focusing on British views of Joan before the performance of Shaw’s Saint Joan, and by challenging over-simplified narratives of England’s rehabilitation of her former adversary.”—Michael Evans, Medievally Speaking

In this book, Gail Orgelfinger examines the ways in which English historians and illustrators depicted Joan of Arc over a period of four hundred years, from her capture in 1429 to the early nineteenth century.

The variety of epithets attached to Joan of Arc—from “witch” and “Medean virago” to “missioned Maid” and “shepherd’s child”—attests to England’s complicated relationship with the saint. While portrayals of Joan in English popular culture evolved over the centuries, they do not follow a straightforward trajectory from vituperation to adulation. Focusing primarily on descriptions of Joan’s captivity, trial, and execution, this study shows how the exigencies of politics and the demands of genre shaped English retellings of her military successes, gender transgressions, and execution at the hands of her English enemies. Orgelfinger’s research illuminates how and why English writers and artists used the memory of Joan of Arc to grapple with issues such as England’s relationship with France, emerging protofeminism in the early modern era, and the sense of national guilt over her execution.

A systematic analysis of Joan’s English historiography in its political and social contexts, this volume sheds light on four centuries of English thought on Joan of Arc. It will be welcomed by specialist and general readers alike, especially those interested in women’s studies.

“Orgelfinger’s work is a thoroughly researched and welcome addition to the scholarship on the post-medieval reception of Joan of Arc. She offers valuable new insights by focusing on British views of Joan before the performance of Shaw’s Saint Joan, and by challenging over-simplified narratives of England’s rehabilitation of her former adversary.”—Michael Evans, Medievally Speaking

“A work of panoramic scope that touches an array of perspectives, from that of an unidentified soldier present at her burning all the way up to Shakespeare.”—Scott Manning, Philadelphia Inquirer

“Well researched and vibrantly composed, Gail Orgelfinger’s Joan of Arc in the English Imagination, 1429–1829 traces the translations over time of the French heroine into a figure reviled and then embraced across the Channel. Through careful attention to an impressive array of sources, Orgelfinger offers to medieval studies and medievalism alike a not-to-be-missed book about how gender, national rivalries, temporal distance, fantasy, and historical fact enmesh over the centuries to keep the past alive in surprising new forms.”—Jeffrey J. Cohen, author of Medieval Identity Machines

“Most often the English perspective on Joan has been simply dismissed as resentment for her influential role in their ultimate defeat in the Hundred Years’ War. In this book, Orgelfinger shows that the English afterlife of Joan is far more complex and interesting.... This is an excellent book that will appeal to scholars, students, and the large number of Joan of Arc fans outside of academia.”—Kelly DeVries, author of Joan of Arc: A Military Leader

“A vibrant, original, and important contribution to both the historical interpretation of Joan and the changing tastes and interests in historical and literary cultures in England from the fifteenth to the early nineteenth centuries.”—Anne Curry, Journal of British Studies

“Orgelfinger spiritedly gives George Bernard Shaw’s Joan the last word after such a profusion of attempts to capture who she was. Looking at a vision of her statue in Winchester Cathedral, Joan declares: ‘Is that meant to be me? I was stiffer on my feet.’”—Deborah Fraioli, Mediaevistik

“Orgel!nger’s study of Joan’s legacy in England stands out in its considerable erudition and its fine close readings of the sources.”—Karen Sullivan, Speculum

“Joan has continued to fascinate from her first appearance in the early fifteenth century. Thanks to Professor Orgelfinger’s study, we now have a definitive study of that fascination among her natural enemies, the English who sought to defeat her in life, engineered her death, and have had to contend with her legacy ever since.”—Kevin J. Harty, Arthuriana

“Orgelfinger’s study of Joan’s legacy in England stands out in its considerable erudition and its fine close readings of the sources.”—Karen Sullivan, Speculum

“Orgelfinger’s engagement with issues of gender, time, and English-French relations over the centuries is to be commended. The speed at which centuries of historiography is covered is almost breathtaking, yet the material is well handled. Overall, this is an excellent book.”—Sally Fisher, Parergon

“A valuable addition to scholarship both on the afterlives of Joan herself, and on issues of medievalism in general.”—Lesley Coote, English Historical Review

Gail Orgelfinger is Senior Lecturer Emerita at the University of Maryland, Baltimore County.

A Note on the Text

1 “We Have Burned a Saint”: Joan of Arc and the English in France

2 “The Martiall Maide”: Joan of Arc and the French in England

3 “Penthesilea Did It. Why Not She?”: An English Virago

4 “A Pievish Painted Puzel”: Joan of Arc and Mary Queen of Scots in 1 Henry VI

Afterword: “Is That Meant to Be Me?”

Chaucer, Gower, and the Vernacular Rising

Poetry and the Problem of the Populace After 1381