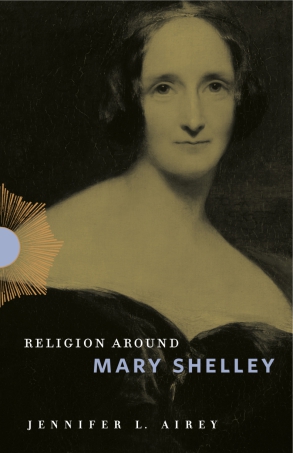 “Religion Around Mary Shelley is a valuable addition to Mary Shelley scholarship, and it can also stand on its own as superb scholarship in the field of Romanticism. Undergraduates writing honors theses, graduate students writing seminar papers, and scholars interested in the intersection of Romantic literature and religion will find this volume accessible and useful.”—Eric Bontempo, Reading Religion

Mary Shelley lived and wrote during an age of religious instability, one that witnessed the spread of atheism, millenarianism, Methodism, Unitarianism, and Evangelicalism, among other belief systems. In this book, Jennifer L. Airey foregrounds Shelley as an important religious thinker of the Romantic period, analyzing her creative engagement with the religious controversies around her and uncovering a belief system that was both influenced by and profoundly different from those of her male Romantic counterparts.

Previous assessments of religion in Shelley’s work have been limited in scope and, as Airey asserts, have tended to privilege the novels she wrote when she was married to the prominent atheist Percy Shelley and shortly after his death. Such readings imply that Shelley and her works are most interesting for what they can tell us about her husband and second-generation (and predominantly male) Romanticism. Airey’s analysis corrects this imbalance by giving equal weight to Shelley’s later work, which draws on Evangelical discourses elevating the mother as the theological and moral center of the household.

Nuanced and accessible, Religion Around Mary Shelley makes visible the valuable insight that Shelley’s works offer into the complexity of religious views prominent in her cultural moment. It will appeal to specialists and nonacademics interested in the Godwin-Wollstonecraft-Shelley circle.

“Religion Around Mary Shelley is a valuable addition to Mary Shelley scholarship, and it can also stand on its own as superb scholarship in the field of Romanticism. Undergraduates writing honors theses, graduate students writing seminar papers, and scholars interested in the intersection of Romantic literature and religion will find this volume accessible and useful.”—Eric Bontempo, Reading Religion

“The enthusiastic recovery of female Romantic writers and the revaluing of prose vis-à-vis poetry means that Shelley is now recognized as a major Romantic-era figure. Airey’s book participates in this now well-established revisionist tradition, but by focusing on religion she is able to add something that earlier accounts have tended to miss or to underplay.”—Colin Jager, Women's Writing

“Airey makes unexpected connections between Mary Shelley and religious history, lending nuance to today’s arguments for Shelley's unique contributions to Romanticism and contemporary thought. In this fascinating, accessible book, readers will find their expectations challenged, with current debates expanded and sometimes redirected.”—Caroline McCracken-Flesher, author of The Doctor Dissected: A Cultural Autopsy of the Burke and Hare Murders

“Religion Around Mary Shelley provides an excellent overview of the strands of religious discourse in England during the eighteenth and nineteenth centuries and their influence on Mary Shelley’s works. Tracing Shelley’s perspective on religion from doubt bordering on atheism (like her husband and father) to an understanding of spirituality centered on domesticity and family connections, this book represents a significant contribution to scholarship on Shelley as well as scholarship on gender and Romanticism in general.”—Orianne Smith, author of Romantic Women Writers, Revolution and Prophecy: Rebellious Daughters, 1786 -1826

“With remarkable clarity, energy, and scope, Airey performs a real service for students and scholars of Mary Shelley. Spanning the full range of her career, Religion Around Mary Shelley takes the reader beyond the biography and into the language and inner life of a writer profoundly engaged with skepticism and faith in a rapidly changing world unsettled by the disturbing possibility that God was absent.”—Daniel E. White, author of Early Romanticism and Religious Dissent

“Jennifer L. Airey writes eloquently about Shelley’s faith and her complex relationship with the various discourses around religion current in the early nineteenth century. Historically grounded and deeply informed, Religion Around Mary Shelley presents a welcome emphasis on many of Shelley’s lesser-studied works and later works, giving us a fuller picture of a writer for whom the creative process of thought and composition was deeply inflected by her rational imagination.”—Jacqueline Labbe, author of Romantic Visualities: Landscape, Gender, and Romanticism

“Gaining an understanding of Shelley’s development across her life is important; Airey has combined the insight provided by Shelley’s journals and letters with excellent analysis of her canon to illuminate her trajectory concerning religious faith.”—Staci Stone, Tulsa Studies in Women’s Literature

“This helpful work will serve as a catalyst for further investigation of religion in Shelley’s writings.”—Lisa Vargo, European Romantic Review

Jennifer L. Airey is Associate Professor of English at the University of Tulsa.

The Professionalization of Gender from Charlotte Smith to the Brontës