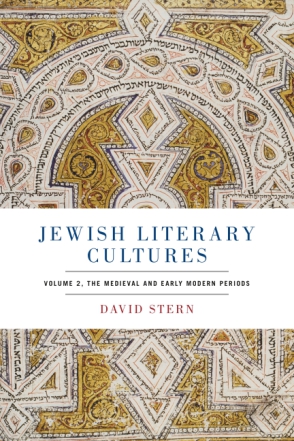 “This is a perceptive, deeply detailed, carefully crafted study. The essays collected here originated in a variety of settings over the course of Stern’s career. In bringing them together, Stern reveals the deep power and meaning for Jewish culture of literary forms and of the book as a cultural artifact.”—A. J. Avery-Peck, Choice

Stern uses contemporary critical approaches to assess larger themes and currents in medieval and early modern Jewish civilization—opening new windows into cultural exchange, the impact of materiality upon reading practice and literary reception, and the nature of the Jewish imagination and literary creativity. The texts and topics examined in this volume include a remarkable story about a Jew who marries a demoness, a blasphemous rabbinic parody, and the material histories of four classic Jewish books: the Hebrew Bible in the manuscript age; the early printed rabbinic Bible, the Talmud, and the invention of its unusual page format; the medieval Jewish prayerbook and its unexpected illustrations; and the Passover Haggadah and its cartographic messianism.

Accessibly written and thoughtfully compiled, these essays are perfect for use in the classroom and for reference in personal and professional research. Scholars and specialists in medieval and early modern Judaism in particular will appreciate Stern’s work.

“This is a perceptive, deeply detailed, carefully crafted study. The essays collected here originated in a variety of settings over the course of Stern’s career. In bringing them together, Stern reveals the deep power and meaning for Jewish culture of literary forms and of the book as a cultural artifact.”—A. J. Avery-Peck, Choice

“In volume 2 of his three-part study of Jewish book culture, David Stern explores the literary imagination behind several little-known but fascinating medieval Hebrew works. He also offers a masterful demonstration of how much cultural history is concealed in the formal properties of ancient books and manuscripts. Stern writes with literary sensitivity, scholarly versatility, and an inside knowledge of classic Jewish texts.”—Raymond Scheindlin, author of A Short History of the Jewish People: From Legendary Times to Modern Statehood

“This unusual book brings together some of the outstanding fruits of David Stern’s research over the years, which began with a focus on Jewish literary culture and developed into an interest in Jewish book culture and the relationship between the two. It takes us on a fascinating journey from the abstract text to the tangible material volume, from the minds of those who study a text to the sensations of those who hold books in their hands.”—Katrin Kogman-Appel, author of Jewish Book Art Between Islam and Christianity: The Decoration of Hebrew Bibles in Medieval Spain

“Stern tells the reader how he experienced the transition from analyzing the abstract (the textual) to studying the tangible (the material), from his focus on hermeneutics to his interest in practice, and Jewish Literary Cultures with its elegant prose follows this path beautifully. But what makes this book so rich is, in fact, not necessarily the transition from one approach to another but rather the combination of the two.”—Katrin Kogman-Appel, Speculum

David Stern is the Harry Starr Professor of Classical and Modern Jewish and Hebrew Literature, Professor of Comparative Literature, and Director of the Center for Jewish Studies at Harvard University. He is the author, editor, or coeditor of fourteen books, including The Monk’s Haggadah and Jewish Literary Cultures: Volume 1, The Ancient Period, both published by Penn State University Press.