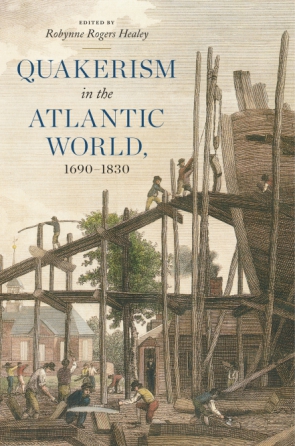 This third installment in the New History of Quakerism series is a comprehensive assessment of transatlantic Quakerism across the long eighteenth century, a period during which Quakers became increasingly sectarian even as they expanded their engagement with politics, trade, industry, and science. The contributors to this volume interrogate and deconstruct this paradox, complicating traditional interpretations of what has been termed “Quietist Quakerism.”

Examining the period following the Toleration Act in England of 1689 through the Hicksite-Orthodox Separation in North America, this work situates Quakers in the eighteenth-century British Atlantic world. Three thematic sections—exploring unique Quaker testimonies and practices; tensions between Quakerism in community and Quakerism in the world; and expressions of Quakerism around the Atlantic world—broaden geographic understandings of the Quaker Atlantic experience to determine how local events shaped expressions of Quakerism. The authors challenge oversimplified interpretations of Quaker practices and reveal a complex Quaker world, one in which prescription and practice were more often negotiated than dictated, even after the mid-eighteenth-century “reformation” and tightening of the Discipline on both sides of the Atlantic.

Accessible and well-researched, Quakerism in the Atlantic World, 1690-1830, provides fresh insights and raises new questions about an understudied period of Quaker history.

“Quakerism in the Atlantic World makes an invaluable contribution to Quaker history and scholarship, both in its own right and as a catalyst for further exploration and analysis of Quakerism during this period. At the very end of the book, Healey states that, for the contributors, what was perhaps most important, was opening up space for future research and dialogue. The collection certainly seems to meet that objective, and in time, it will no doubt be recognised as a book that stimulated the work of a new generation of scholars, and inaugurated a thorough-going reappraisal of Quakerism during the long eighteenth century.”—Stuart Masters, Journal of the Friends Historical Society

Robynne Rogers Healey is Professor of History and Codirector of the Gender Studies Institute at Trinity Western University. She is the author of From Quaker to Upper Canadian: Faith and Community Among Yonge Street Friends, 1801–1850, and the coauthor of Quaker Studies: An Overview; The Current State of the Field.

1. “Our Dear Friend Has Departed This Life”: Memorial Testimony Writing in the Long Eighteenth Century

2. “Within the Bounds of Their Circumstances”: The Testimony of Inequality Among Eighteenth-Century New England Friends

3. Friendly Advice: The Making and Shaping of Quaker Discipline

6. Quakers and Marriage Legislation in England in the Long Eighteenth Century

Part 3: Expressions of Quakerism Around the Atlantic World

8. Quakers, Indigenous Americans, and the Landscape of Peace

9. A Complex Faith: Strategies of Marriage, Family, and Community Among Upper Canadian Quakers, 1784-1830