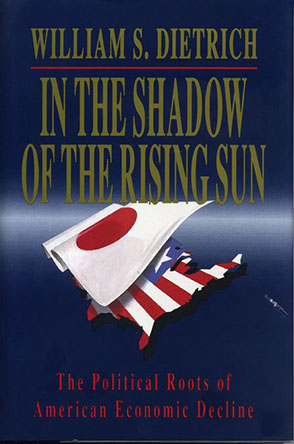 To get at the political roots of American economic decline, businessman-scholar William Dietrich puts the disciplined thinking of political philosophy, comparative politics, and international political economy to effective use in analyzing the source and nature of American institutional weakness.

Unlike many who have written on U.S.-Japanese relations, Dietrich does not seek a solution a particular new policy or institutional innovation, such as an American counterpart to Japan's MITI. Rather, he emphasizes the systemic nature of America's problems. The failures of management, finance, and politics are interlocking and reinforcing, he shows, and thus a change in the others that spell doom for any partial approach.

Most fundamental, however, are the political weaknesses of the system. It is in the basic political inheritance of America, reflected in the very design of the Constitution and the long dominance of Jeffersonian individualism over Hamiltonian statism, that we must locate the roots of American impotence in the face of Japan's challenge.

As the problem is systemic, so must the solution be equally wide-ranging. Nothing short of "fundamental institutional reform," Dietrich argues, will succeed in reversing America's downward course.

Boasts about the victory of free-market capitalism in the wake of the collapse of the Communist state-directed system are premature and distract attention form the necessary recognition that it is the Japanese combination of the free market with a strong central state and a highly skilled professional bureaucracy that has really proved triumphant in our modern age of advanced technology. Only if we fully understand the reasons for Japanese success and American decline can we begin the arduous but crucial task of reconstructing the American polity to give it the power required to formulate and implement a national industrial policy that can regain for the United States its preeminent place among the world's industrial powers.

The alternative, Dietrich describes in a chilling scenario, is a "Pax Nipponica" that will find America playing second fiddle to Japan with economic, cultural, and political consequences that will make Britain's eclipse by the United States earlier in this century seem mild by comparison.

William S. Dietrich is President of Dietrich Industries, a steel processor and building products manufacturer based in Pittsburgh. A graduate of Princeton, he received a PhD in Political Science from the University of Pittsburgh in 1984. His combination of business experience and academic expertise makes him unusually well qualified to address the complex practical and theoretical issues he tackles in this book.