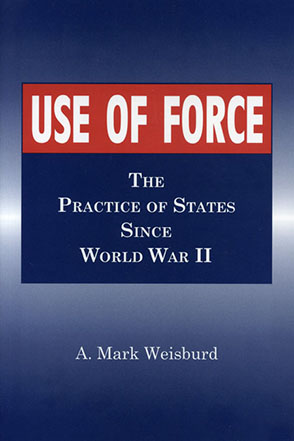 This book is among the few to develop in detail the proposition that international law on the subject of interstate force is better derived from practice than from treaties. Mark Weisburd assembles here a broad body of evidence to support practice-based rules of law on the subject of force.

Analyses of a particular use of force by a state against another state generally begin with the language of the Charter of the United Nations. This approach is seriously flawed, argues Weisburd. States do not, in fact, behave as the Charter requires. If the legal rule regulating the use of force is the rule of the Charter, then law is nearly irrelevant to the interstate use of force. However, treaties like the Charter are not the only source of public international law. Customary law, too, is binding on states. If state behavior can be shown to conform generally to what amount to tacit rules on the use of force, and if states generally enforce such rules against other states, then the resulting pattern of practice strongly supports the argument that the use of force is affected by law at a very practical level.

This work aims to demonstrate that such patterns exist and to explain their content. Weisburd discusses over one hundred interstate conflicts that took place from 1945 through 1991. He focuses on the behavior of the states using force and on the reaction of third parties to the use of force. He concentrates upon state practice rather than upon treaty law and does not assume a priori that any particular policy goal can be attributed to the international legal system, proceeding instead on the assumption that the system's goals can be determined only by examining the workings of the system.

“This is an outstanding example of interdisciplinary scholarship between international law and political science. Professor Weisburd cuts through the thicket of international legal rhetoric while accepting the reality of customary international law. The result is a significant contribution to the study of post-World War II international conflicts.”—Anthony D'Amato, Northwestern University

A. Mark Weisburd is Professor of Law at the University of North Carolina.

In April 1978 the government of Afghanistan was overthrown in a coup led by the People's Democratic Party of Afghanistan (PDPA), a Marxist-Leninist party. The PDPA's leader, Nur Mohammed Taraki, became president in the new government. That government soon drew opposition from rural Afghans, who formed the majority of the population and who were composed overwhelmingly of devout Muslims. Suspicion that the new government would be anti-Islamic led to the outbreak of a guerilla rebellion in June 1978. Over the next year opposition to the government grew and a number of different guerilla groups were formed. The government received military advisors and increasing aid from the Soviet Union, which had not placed much reliance on the PDPA prior to the coup. Pakistan gave aid to guerillas, alarmed both by the Marxism of the new government and by the Soviet presence on its doorstep. This latter factor also led China to aid the guerillas.

By the fall of 1979 the war was going increasingly badly for the PDPA government. Its troops were defecting to the rebels in great numbers, and its efforts at social and economic reform aroused great resentment. The government nonetheless plunged ahead with its program, relying on harshness to establish its control. Most prominent among the party leaders who supported this policy was Hafizullah Amin, the defense minister. In the fall of 1979 a power struggle between Amin and Taraki ended with Taraki's murder and Amin's assumption of the presidency. This development led the Soviet Union to begin planning to intervene. The Soviets had become convinced that Amin's harsh policies could only lead to the defeat of his government, which could in turn lead to the emergence of a government unfriendly to the Soviet Union in a state on the Soviet border. To avoid this eventuality the Soviet Union began moving troops into Afghanistan on December 19, 1979. An effort to arrest Amin on December 27 led to his death. Later that day, Babrik Karmal, leader of a faction of the PDPA more moderate than that of Taraki and Amin, proclaimed in a radio broadcast (described as originating in Afghanistan but actually coming from Soviet territory) his seizure of power and a request for Soviet assistance.

The Soviet withdrawal did not end the war. The PDPA held its own for some time. In late 1990, however, the United States and Soviet Union each agreed to suspend provision of arms to the side it was supporting. Continued UN efforts to mediate between the Afghan combatants failed, and the Afghan government, crippled by defections of military units, finally collapsed in April 1992. The rebel groups installed a government, but there has been much fighting among them ever since.

Other sanctions were imposed as well. The United States refused to ratify an important strategic arms treaty it had negotiated with the Soviet Union. A number of states opposed economic sanctions on the Soviet Union, including the United States, the United Kingdom, Canada, New Zealand, and the European Community. A number of Western and Islamic states denounced the invasion and announced diplomatic sanctions. China and Yugoslavia were also harshly critical. A number of states, including the United States, boycotted the 1980 Moscow Olympic Games in protest of the invasion. The 1981 Islamic Conference demanded an immediate withdrawal of foreign troops from Afghanistan. Similarly, the Meeting of Foreign Ministers of Nonaligned States in that year also called for a foreign troop withdrawal. Strong opposition was also expressed in the General Assembly; a resolution calling for the withdrawal of "foreign" troops from Afghanistan was adopted each year from 1980 through 1987, attracting more votes in 1987 than in 1980 (123 compared to 104). At the same time the secretary-general began efforts at mediation in 1981, which continued until a successful agreement was finally achieved, as noted above.

All of these reactions had an effect on the Soviet Union's decision to withdraw from Afghanistan; negative reactions to its invasion had caused a decline in its relations with the third world, increased difficulty in negotiating arms-control agreements and trade arrangements with Western states, and contributed to the PRC's refusal to improve relations. Particularly given Gorbachev's desire to reduce reliance on the use of force in international relations, the general worsening in the Soviet Union's international situation caused by its actions in Afghanistan clearly contributed to the Soviet decision to reverse its policy. The strength of the mujaheddin also contributed to the decision to leave, and that strength reflected in part aid given the guerillas by third states.

At the time of the partition of British India in 1947, Afghanistan had challenged its border with Pakistan, known as the Durand Line, claiming the border between the two states should rest instead on the Indus River. Somewhat contradictorily, it strongly supported the idea that the Pakhtun (Pathan) people should be able to create an independent state, Pakhtunistan. Since Pakhtun tribes lived on either side of the Durand Line, the creation of such a state would also serve to remove Pakistan from that boundary; to the extent that Afghanistan could dominate the new state, Pakhtunistan's creation would serve the same Afghan end as a change in the border.

In September 1960, Afghanistan's push for an independent Pakhtunistan led it to bribe the ruler of one of the small states within Pakistan to attack one of his feudatories. In May 1961, after Pakistan had accused Afghanistan of fomenting trouble between the two rulers, fighting broke out between the two states. They broke diplomatic relations in July, reestablishing relations only after mediation by the Shah of Iran in May 1963.

Outside reaction was limited. The Soviet Union supported the creation of Pakhtunistan even after the initial tribal fighting. One may speculate that this stand was at least partly motivated by the hostility to Pakistan, which had aligned itself with the United States in the Cold War. The United States, in contrast, sought to remain neutral, not wishing to drive Afghanistan closer to the Soviet Union. In line with this approach, the United States offered its good offices to help resolve the dispute but did not go so far as formally proposing itself as a mediator, and offered no suggestions regarding the basic dispute.

This small conflict was a border dispute left over from the period of British colonial rule on the Indian subcontinent. Afghanistan was seeking to alter its border by the use of force and also by manipulating the doctrine of self-determination. Outside attitudes, to the extent that they existed, seemed determined primarily by ideology - the Soviet Union opposed an ally of the United States, while the United States tried to avoid either offending its ally or alienating the other party to the dispute. The only effective outside intervention was the shah's, and that took the form of mediation rather than identifying a wrongdoer and sanctioning that party.