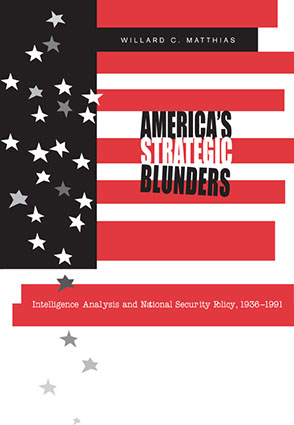 This survey of more than fifty years of national security policy juxtaposes declassified U. S. national intelligence estimates with recently released Soviet documents disclosing the views of Soviet leaders and their Communist allies on the same events. Matthias shows that U. S. intelligence estimates were usually correct but that our political and military leaders generally ignored them—with sometimes disastrous results. The book begins with a look back at the role of U. S. intelligence during World War II, from Pearl Harbor through the plot against Hitler and the D-day invasion to the "unconditional surrender" of Japan, and reveals how better use of the intelligence available could have saved many lives and shortened the war. The following chapters dealing with the Cold War disclose what information and advice U. S. intelligence analysts passed on to policy makers, and also what sometimes bitter policy debates occurred within the Communist camp, concerning Vietnam, the Bay of Pigs, the Cuban missile crisis, the turmoil in Eastern Europe, the Six-Day and Yom Kippur wars in the Middle East, and the Soviet intervention in Afghanistan. In many ways, this is a story of missed opportunities the U. S. government had to conduct a more responsible foreign policy that could have avoided large losses of life and massive expenditures on arms buildups.

While not exonerating the CIA for its own mistakes, Matthias casts new light on the contributions that objective intelligence analysis did make during the Cold War and speculates on what might have happened if that analysis and advice had been heeded.

“This book takes the reader into the inner councils of U.S. Cold War strategic planning and enables one to second-guess the best and the brightest from Truman to Reagan. With its wealth of heretofore top-secret National Intelligence Estimates, it is to the Cold War what the Pentagon Papers were to the war in Vietnam.”—Charles D. Ameringer, Author of U.S. Foreign Intelligence: The Secret Side of American History

“This book, particularly when read in conjunction with the newly released CIA documents, should be very useful to serious students of the Cold War and of American national security policy.”—R. A. Strong, CHOICE

“The descriptions of major problems or crises and the misuse of analysis are concise and well written. The accuracy of analysis is assessed against later Soviet behavior (or that of others), long-run developments, and newly available evidence from Soviet bloc files. This makes a stimulating book, good reading for specialists in intelligence, national security, or the recent history of American foreign policy.”—Patrick M. Morgan, Perspectives on Political Science

“The book comes alive when he draws on his personal experiences to explain splits within the intelligence community, to describe the intelligence processes, and to provide telling details. Matthias is an acute observer of how intelligence was put together and sheds light on a number of key estimates, not only on the USSR but also on Vietnam and other countries.”—Robert Jervis, Political Science Quarterly

“America's Strategic Blunders is a hard-hitting defense of CIA intelligence analysis from 1936 to 1973 and a critique of the failure of policymakers from 1973 to 1991 to maintain a system of national intelligence that provided what was needed, if not always what was welcome. The author served for many years as a senior intelligence estimator and knows what he is talking about. His thoughtful analysis provides an important complement for understanding declassified records on the role of intelligence in policy-making in the Cold War, with valuable lessons for the future as well.”—Raymond L. Garthoff, Brookings Institution

Willard C. Matthias began his career in intelligence during World War II deciphering "ultra" codes for the Military Intelligence Division of the War Department General Staff. He joined the CIA's Office of the National Estimates when it opened in 1950 at the start of the Korean War and rose to become a member of the Board of National Estimates in 1961. He retired in 1973 not long after Richard Helms resigned as CIA Director rather than cooperate in President Nixon's scheme to have the CIA help cover up the Watergate break-in.