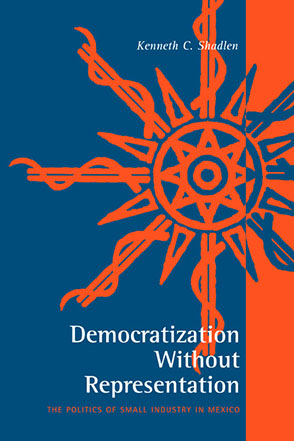 “This fine book makes an important contribution both to the comparative literature on the quality of democracy in post-transition settings and to the growing literature on comparative business politics in Latin America. By deftly weaving together new archival evidence and interview material, Shadlen provides a fresh—and provocative—angle on the challenges that free-market economic reforms and political democratization pose for small business in developing countries. The book makes a convincing case that the democratization of authoritarian-corporatist regimes can ironically weaken the representation of small business in the policy arena. This, in turn, has sobering implications both for the quality of democracy and for overall economic performance, especially in terms of employment generation.”—Richard Snyder, Brown University

When countries become more democratic, new opportunities arise for individuals and groups to participate in politics and influence the making of policy. But democratization does not ensure better representation for everyone, and indeed some sectors of society are ill-equipped to take advantage of these new opportunities. Small industry in Mexico, Kenneth Shadlen shows, is an excellent example of a sector whose representation decreased during democratization.

Shadlen’s analysis focuses on the basic characteristics of small firms that complicate the process of securing representation in both authoritarian and democratic environments. He then shows how increased pluralism and electoral competition served to exacerbate the political problems facing the sector during the course of democratization in Mexico. These characteristics created problems for small firms both in acting collectively through interest associations and civil society organizations and in wielding power within political parties. The changes that democratization effected in the structure of corporatism put small industry at a significant disadvantage in the policy-making arena even while there was general agreement on the crucial importance of this sector in the new neoliberal economy, especially for generating employment. The final chapter extends the analysis by making comparisons with the experience of small industry representation in Argentina and Brazil.

Shadlen uses extensive interviews and archival research to provide new evidence and insights on the difficult challenges of interest aggregation and representation for small industry. He conducted interviews with a wide range of owners and managers of small firms, state and party officials, and leaders of business associations and civil society organizations. He also did research at the National Archives in Mexico City and in the archives of the most important business organizations for small industry in the post-World War II period.

“This fine book makes an important contribution both to the comparative literature on the quality of democracy in post-transition settings and to the growing literature on comparative business politics in Latin America. By deftly weaving together new archival evidence and interview material, Shadlen provides a fresh—and provocative—angle on the challenges that free-market economic reforms and political democratization pose for small business in developing countries. The book makes a convincing case that the democratization of authoritarian-corporatist regimes can ironically weaken the representation of small business in the policy arena. This, in turn, has sobering implications both for the quality of democracy and for overall economic performance, especially in terms of employment generation.”—Richard Snyder, Brown University

“This criticism aside, the book is a valuable contribution to debates about business, democracy, and development.”—Peter Kingstone, Political Science Quarterly

“These two monographs on government-business relations in contemporary Mexico (Shadlen’s Democratization Without Representation and Macleod’s Downsizing the State) share the same publisher as well as the virtues of careful research and documentation, creative synthesis of theoretical strands from political science, economic sociology and new institutional economics, an explicit comparative angle and accessibility for non-area specialists. These books can be confidently recommended as texts in graduate courses on comparative politics, sociology of economic organizations, business management and public administration.”—Kun-Chin Lin, Political Studies Review

“The book represents a thorough and comprehensive study of small industry politics in Mexico, drawing from more than 100 interviews and extensive archival research. . . . [The book makes] an important contribution to the study of Mexican political economy and will be of great interest to scholars of that discipline.”—Caroline Beer, Perspectives on Politics

“Given the extent and depth of the author’s contribution to understanding small industrialists from the inside out, Democratization Without Representation is very much a worthwhile read. Shadlen has presented us with a big book on small business.”—Francisco Durand, Journal of Latin American Studies

1. The Politics of Small Industry Representation

3. The Challenges of Change: Crisis, Democratization, and the Quest for Representation

1 The Politics of Small Industry Representation

The close of the twentieth century witnessed a “third wave” of democratization, as countries throughout the developing world and Eastern Europe underwent transitions from authoritarian to democratic political regimes. There are sound reasons to expect democratization to enhance representation and improve the quality of political life. In democracies, political parties bid for voters’ support. And in democracies, citizens generally can join, with minimal constraints from the state, the associations they care to join. Democratization, in sum, opens up new opportunities for social actors to participate in politics and to be represented. It comes as no surprise that people have fought so hard for so long to live in democracies, and that the spread of democracy is a celebrated event in world history.

That democratization can lead to declining representation for some citizens and groups of citizens is not terribly surprising, in principle. After all, we would expect democratization to dilute the influence of privileged actors who had disproportionate influence and benefited from special treatment under the preceding regime. Yet small industrialists are typically not insiders who benefit from cronylike relations with the state; they are rarely part of the party nomenclature or ruling elite. Industry, yes, but not small industry. No, small industry, the weak segment of local capital, is not among that set of actors that we would expect to be well represented under authoritarianism, or that we would expect to experience declining representation during the course of democratization. Weak actors such as small industry need to devise strategies to secure representation. They cannot expect the state—neither authoritarian nor democratic—to look after their interests. Among the central points revealed in this book, however, are that democratization can foreclose some channels for representation, all the while creating new opportunities that weak actors can exploit only with great difficulty.

Representative decline in the case of small industry is particularly puzzling for another reason as well. Most countries undergoing democratization have simultaneously undergone equally significant economic transitions that should increase the importance of small enterprises. That is, the third wave of democratization has coincided with a global shift away from state-led strategies of economic development to neoliberalism, where private investors become primarily responsible for job creation and capital accumulation. Countries adopting neoliberal models have relaxed restrictions on trade, investment, and capital flows; privatized many state industries; and adopted more orthodox fiscal and monetary positions. While it is no secret that larger firms—national and transnational—with access to capital and technology play the leading developmental role, the capacity of small firms to integrate into global production chains has critical effects on economic outcomes under the new development model (Peres and Stumpo 2002). To the extent that small firms fail to adjust to international competition, developing countries suffer from higher levels of vulnerability to external shocks. Moreover, in the context of high levels of poverty and inequality, and with the state reducing its role as employer, small industry’s capacity to generate employment gains unprecedented urgency.

Because representation affects public policy, the difficult challenges of small industry representation have profound developmental implications. To be sure, providing assistance to small firms is increasingly discussed as a critical dimension of “second-generation reform” in Latin America and the developing world (Pastor and Wise 1999). Yet while the potential developmental role of small firms is recognized, the importance of representation in developing policies to assist such firms is not. It is essential to consider not just the supply of policy but also the conditions under which the potential beneficiaries can articulate their needs and participate in the design and shaping of such policies. As we shall see, assisting small firms is not a technical choice, but rather a political choice, for doing so may create conflicts between small industrialists and other actors with different preferences. Thus, it is essential that we consider the capacity of small industrialists to construct durable mechanisms of representation.

<1> Democratization Without Representation in Mexico

In the 1980s and 1990s, Mexico underwent a transition from authoritarianism to democracy, a transition that featured the removal of various legal impediments to representation. This transition occurred later and more slowly than in many countries in Latin America and elsewhere throughout the developing world. Indeed, debates over how democratic Mexico was or was becoming raged throughout the period, as did debates over whether and when Mexico crossed a magic threshold and became a democracy. Did the election of Vicente Fox in 2000—the first time in modern Mexican history that the president would not be from the Institutional Revolutionary Party (PRI)—mean that Mexico was now a democracy? Or did this election mark the beginning of the transition? Similar questions were debated three years earlier, following the midterm elections of 1997, when the PRI lost control of the national legislature for the first time.

Resolving these debates about regime classification and the end point of Mexico’s transition is not the point here. What is clear is that Mexico was undergoing a process of democratization in this period, that a wide range of legal impediments to participation and representation were eradicated. And, importantly, it is clear that the relaxation of state-imposed constraints on interest association created new space for civic engagement and that the emergence of an increasingly competitive electoral environment created new opportunities for political parties.

Yet during this same period, as Mexico became more democratic, small industry’s capacity to participate in policy making diminished. As we shall see, small industry secured greater representation under decades of single-party authoritarian rule then in the more competitive political environment. This is an actor that throughout the post–World War II era gained representation through interest associations, but in the course of democratization the most important business organization for small industry representation lost its capacity to defend such firms’ interests. Nor has democratization generated an environment for alternative business associations, civil society organizations (CSOs), or political parties to fill this vacated space and represent small industry.

Why has small industry’s representation diminished in the context of democratization? Why, in a country plagued by high levels of unemployment and underemployment, might actors capable of providing jobs seem to diminish in political importance? To address these questions, and to explain the phenomenon of declining representation, in this book I analyze the mechanisms by which small industrialists’ interests have been represented in Mexican politics. We will examine the challenges of representation through two basic channels, associations and parties. A set of inherent core attributes are identified, attributes that pose obstacles for securing representation through these two channels; and then actors’ strategies for overcoming these obstacles in changing economic and political conditions are analyzed.

Transitions from authoritarianism to democracy, we shall see, can unleash conflicts and introduce institutional changes that exacerbate the complex challenges of representation. Removing authoritarian constraints on interest association and party competition presents new opportunities, but these are opportunities that small firms may have disproportionately greater difficulty exploiting. In short, small firms may find themselves handicapped by a set of attributes that make gaining representation exceedingly difficult. The irony is that small industrialists may have greater ability to secure representation in an authoritarian context—they may be less able to aggregate and articulate their interests when “free” to do so in a democratic setting.