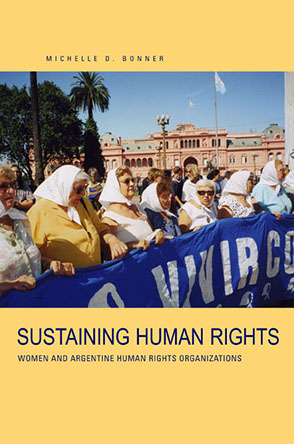 “This thoughtful, original study shows how women’s human rights movements in Argentina adopted and extended gendered historical frames to forge a new political vocabulary for the promotion of human rights. Its comprehensive coverage of Argentina’s path-breaking experience and its theoretical contribution, deepening our understanding of framing and the struggle for political legitimacy, should be of wide interest in Latin American studies, women’s studies, political science, history, and sociology.”—Alison Brysk, University of California, Irvine

The “disappearance” and torture of many people during the worst days of the authoritarian regimes that ruled many Latin American countries in the 1970s have been well documented and widely condemned as abuses of human rights. Less well known is what has become of the movements for human rights once democratic governments were restored in these countries. In this book, Michelle Bonner reveals how the defense of human rights continues today, taking Argentina as her primary example (with comparison to Chile in the final chapter).

Bonner shows that the role of women—viewed as protectors of the family—is key to understanding how human rights movements have evolved. Moreover, the continuity of the “historical frames” used to legitimate their activity is an essential element in the success of their efforts, even while the claimed abuse has changed from the political repression undertaken by the dictators’ minions to the economic hardships created by market inequities resulting from neoliberal policies.

Based on extensive field research and providing a long historical view extending from colonial times to the present, this study compares the activities of the ten most prominent human rights organizations in Argentina and assesses the responses of both state and society.

“This thoughtful, original study shows how women’s human rights movements in Argentina adopted and extended gendered historical frames to forge a new political vocabulary for the promotion of human rights. Its comprehensive coverage of Argentina’s path-breaking experience and its theoretical contribution, deepening our understanding of framing and the struggle for political legitimacy, should be of wide interest in Latin American studies, women’s studies, political science, history, and sociology.”—Alison Brysk, University of California, Irvine

Michelle D. Bonner is Assistant Professor of Political Science at the University of Victoria.

2. Historical Frames: Colonialism to the 1976 Coup

5. The State and Human Rights Organizations: National and International Courts

6. Human Rights Organizations and Society: Demonstrations and the Media

Overview of the Book

This chapter provided a framework for analyzing debates regarding the definition of human rights in the present process of democratization and the role of women in these debates. Central to this analysis is the concept of historical frames. Subsequent chapters in this book use this framework to analyze the case of Argentina.

Beginning with the colonial dictum obedezco pero no cumplo, the analysis reveals the state’s consistent preference for differential and unenforced rights. However, this historical frame is complicated by the intervening variable of political movements such as Peronism that has led the state to provide social rights while continuing to limit or deny civil and political rights. Hence, the recent retraction of social rights is identified as more historically inconsistent than violations of civil and political rights.

Chapter 3 reveals that the last military regime’s use and distortion of the historical frame of women’s political participation contributed to the frame’s appropriation by women in HROs. Rather than the state defining the public morality and nation-as-family women were to represent, the military regime’s extreme abuse of human rights led women to define the meaning of their role for themselves. Hence, women used the historical frame of women’s political participation to legitimize their demands for the enforcement of rights.

Chapter 4 compares women’s present participation in all ten Historical HROs in Argentina. The chapter shows how women in HROs use the historical frame of women’s political participation to demand the enforcement of civil, political, and social rights. The consistency between the historical frame of women’s political participation and the collective action frames of the HROs are analyzed. The chapter integrates an investigation into the expanding scope of rights that HROs perceive as needing protection from emerging economic threats to the family.

Having identified the historical frames and their use by Argentine HROs, Chapters 5 and 6 assess how persuasive they are for the state and society, respectively. Chapter 5 assesses the response of Argentine governments to demands for human rights based in the need to protect the family. The chapter compares the collective action frames of the ten Historical HROs and how the governments responded to them during the three presidential periods between 1983 and 2002. This section identifies national and international courts as the key arenas of debate between the state and society.

This chapter finds that the state has been more willing to engage in debates with and enforce the rights demanded by HROs whose collective action frames deemphasize the place of the disappeared in the family (for example, the Grandmothers of the Plaza de Mayo and the Solidarity HROs supporting them). HROs emphasizing members of the family that are not supported by the state have been using international courts more often as a means to enter into debates with the Argentine state. Challenging these advances, the persistent power of the military within the Argentine state may be an important reason for the continued politicization of the family and the government’s reticence to enforce rights. By using threatening language and rebellions, the military has resisted demands that they be held accountable for breaking up families by causing people they considered subversive to disappear.

Chapter 6 assesses the response of the broader Argentine society to HROs’ demands framed in terms of the need to protect the family. I find that neoliberal economic reforms and the evolving economic crisis in Argentina increased society’s pressure on HROs to incorporate social and economic rights into the definition of rights used in their collective action frames. HROs’ emphasis on protecting the family facilitated this expansion of the definition of human rights. However, HROs broadened the meaning of rights more in an attempt to achieve frame alignment with other SMOs than to gain media attention. Due in part to the increasing repression of journalists beginning in the 1990s, media coverage of the broadening definition of rights used by HROs was not significant (Amnesty International 1994a and 1998). The chapter compares the changes in HROs’ collective action frames in response to society’s concerns during the three presidential periods from 1983 to 2002.

Chapter 7 concludes by assessing how the analytical framework presented in this book could be used to compare the relationship between human rights and democracy in other countries. A brief comparison with Chile reveals how historical frames can explain why, in a country so similar to Argentina, Chilean HROs have not played as prominent a role as Argentine HROs in sustaining the relevance and influencing the definition of human rights.