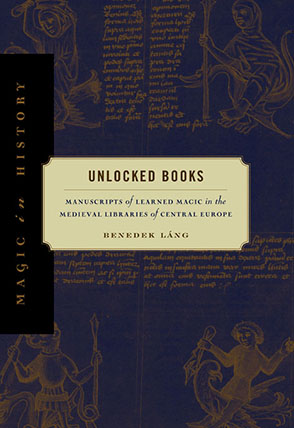 During the Middle Ages, the Western world translated the incredible Arabic scientific corpus and imported it into Western culture: Arabic philosophy, optics, and physics, as well as alchemy, astrology, and talismanic magic. The line between the scientific and the magical was blurred. According to popular lore, magicians of the Middle Ages were trained in the art of magic in “magician schools” located in various metropolitan areas, such as Naples, Athens, and Toledo. It was common knowledge that magic was learned and that cities had schools designed to teach the dark arts. The Spanish city of Toledo, for example, was so renowned for its magic training schools that “the art of Toledo” was synonymous with “the art of magic.” Until Benedek Láng’s work on Unlocked Books, little had been known about the place of magic outside these major cities. A principal aim of Unlocked Books is to situate the role of central Europe as a center for the study of magic.

Láng helps chart for us how the thinkers of that day—clerics, courtiers, and university masters—included in their libraries not only scientific and religious treatises but also texts related to the field of learned magic. These texts were all enlisted to solve life’s questions, whether they related to the outcome of an illness or the meaning of lines on one’s palm. Texts summoned angels or transmitted the recipe for a magic potion. Láng gathers magical texts that could have been used by practitioners in late fifteenth-century central Europe.

Benedek Láng is Assistant Professor in the Department of Philosophy and History of Science, Budapest University of Technology and Economics.

Introduction: In Search of Magician Schools

7. Magic in the Clerical Context

8. Magic in the Courtly Context

9. Magic in the University Context

Epilogue: When Central Europe Was Finally Close to Becoming a Center for Magical Studies

Textual Amulets in the Middle Ages