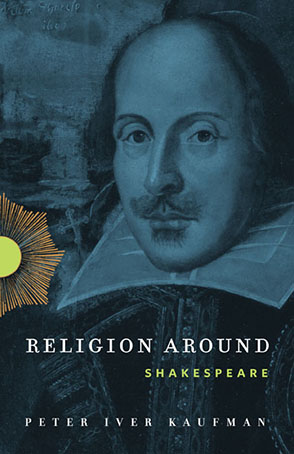 “An urgently needed book. It is one of those rare studies written by an expert who presents a comprehensive overview and detailed analysis through nimble prose and dry humor.”—Kristen Poole, Shakespeare Quarterly

For years scholars and others have been trying to out Shakespeare as an ardent Calvinist, a crypto-Catholic, a Puritan-baiter, a secularist, or a devotee of some hybrid faith. In Religion Around Shakespeare, Peter Kaufman sets aside such speculation in favor of considering the historical and religious context surrounding his work. Employing extensive archival research, he aims to assist literary historians who probe the religious discourses, characters, and events that seem to have found places in Shakespeare’s plays and to aid general readers or playgoers developing an interest in the plays’ and playwright’s religious contexts: Catholic, conformist, and reformist. Kaufman argues that sermons preached around Shakespeare and conflicts that left their marks on literature, law, municipal chronicles, and vestry minutes enlivened the world in which (and with which) he worked and can enrich our understanding of the playwright and his plays.

“An urgently needed book. It is one of those rare studies written by an expert who presents a comprehensive overview and detailed analysis through nimble prose and dry humor.”—Kristen Poole, Shakespeare Quarterly

“This volume is a useful addition to the literature on the ‘turn to religion’ in early modern studies by such scholars as Alison Shell, Debora Shuger, and Jean-Christopher Mayer.”—C. Baker, Choice

“Kaufman’s book is successful in its aims, and they are important ones; by it, not only will Shakespeare’s culture become more comprehensible for general readers, but also Shakespeare scholars and those studying other aspects of Renaissance English life will come away with a sharper, more accurate conception of the period’s maelstrom of religious influences and, I cannot but think, with a healthy reluctance to indulge in oversimplification about it. . . . I heartily recommend this book to specialists and nonspecialists alike.”—John E. Curran Jr., Renaissance Quarterly

“Peter Iver Kaufman examines in impressive detail the religious soil in which Shakespeare’s plays flourished. By offering an expert survey of an immensely complex terrain, this book will serve those who want to scrutinize the religious discourses embedded in the plays. This book is significant, then, for Shakespearean scholars, for scholars of early modern English non-Shakespearean drama, and for historians of the English Reformation. Its originality derives from the author’s command of his special subject: no other historian of religion has examined early modern English religion with as scrupulous and searching an eye to its potential Shakespearean connections. The value of the book lies in its extended examination of the religious pastures, seemingly outside the plays’ boundaries, into which the plays occasionally wander. It’s difficult to think of any recent book to which Kaufman’s can be accurately or extensively compared, an originality that will be its chief source of value for literary scholars. They will deeply profit from what this distinguished historian of religion has provided.”—Richard Mallette, Lake Forest College

I am not a literary historian, and what follows is not another interpretation of several of Shakespeare’s plays. For decades I have been studying the religious cultures of late Tudor and early Jacobean England, particularly what Alison Shell now calls the “fierce internal debate” that “beset” the established church, which was having problems as well “see[ing] off challenges from outside.” What I do in this book is give everyone interested in reading, watching, interpreting, or performing the plays a good look at the religion around Shakespeare. Circumstance is my subject.

Historians have long been at work on the religion of Shakespeare, and a few have gotten around to the religion around him. Several relatively recent and much publicized efforts suggest that late Elizabethan and early Stuart theatergoers justifiably saw Shakespeare’s plays as coded endorsements of expatriate Catholic missionaries’ efforts to restore the realm’s old faith, which Shell characterizes as “challenges from [the] outside.” Those presentations of the playwright’s Catholicism claim to have cracked the code that concealed his religiously unreformed opinions from religiously reformed government censors while it cued Catholics in his first audiences to his abiding allegiance to what they remembered as traditional Christianity. What twenty-first-century playgoers may see and hear simply as Hamlet’s brooding over the skull of poor Yorick is, after some code cracking, an “encrypted tribute” to the Englishman Edmund Campion, who left the realm rather than subscribe to his queen’s religion, returned to reinforce the faith of the resident Catholics, and died a martyr.

Some critics trust that other signs of Shakespeare’s pro-Catholic sentiments need no decryption. After all, how could playgoers fail to be impressed by the reverence for Isabella and the respect for Catholic convents radiating from his Measure for Measure? Very easily! Isabella can be off-putting, which is understandable at times, but wholly un-conventual. She tells her brother, who asked her to compromise her virtue to keep him from the scaffold, that she will “pray a thousand prayers for [his] death.” She will utter “no word to save” him (3.1.145–46). Measure is hardly a token of the playwright’s nostalgia for the higher righteousness professed by the realm’s chaste monks and nuns before monastic foundations were dissolved during the reigns of Elizabeth’s father and step-brother. For, unless we learn something suggesting that Shakespeare wanted audiences to supply a prenuptial altercation after the final exeunt, we must assume Isabella’s departure with Duke Vincentio signaled her consent to his proposal of marriage. Measure’s formerly “enskied” nun-to-be, therefore, was wed, bedded, and well off—well away from a cloister.

Interpreters who take the plays as confessionally freighted sometimes (and somewhat carelessly) depict the religion around Shakespeare as clandestinely Catholic, as “an Escher-like world of secret chapels, priest holes, false walls, and trap doors,” which explains how his drama acquired “an exciting marginality.” Other interpreters who begin with the plays’ indifference to religion, their fascination with a purportedly Protestant “psychology” of inordinate despair, their disenchantment with older Catholic technologies of salvation, or their apparent acceptance of an attenuated form of reformed religion depict the religion around Shakespeare—if they bother with it at all—as relatively unremarkable. The ways the plays are read (as laments for a religion that was lost or as intrigued, bemused, or cleverly critical reactions to the religion Shakespeare found around him) often determines the ways in which the contexts are patched together.

The first two “acts” of what follows are different. They stay far from Shakespeare’s plays and try to repossess the religion around the realm as a glover’s apprentice with a lively curiosity—then as an eclectic playwright—might have taken it in. Admittedly, such repossession requires guesswork. We can only imagine how our subject filtered the news that reached him in Stratford-upon-Avon and London, but it seems a safe bet that the seriousness and success of the queen’s courtships, on which the realm’s religious settlement was thought to depend and which seemed to many at the time to be staggeringly significant, also struck Shakespeare as significant. Anxieties about the succession as well as those about possible invasions and insurrections were expressed in sermons that were all but inescapable, as were opinions that there was either too much preaching or too little.

We cannot tell what Shakespeare thought about his queen’s matrimonial prospects or about either the content or quantity of sermons. Yet we can recapture, to some extent and with some conjecture, what was heard in Stratford, at the collegiate church of the Holy Trinity. We have auditors’ notes from some sermons and printed scripts for others preached from “the Cross” in St. Paul’s churchyard, where Shakespeare almost certainly went to leaf through recent arrivals in the yard’s bookstalls, if not also to listen to what was said by or about the preachers. Some of the sermons delivered at St. Saviour’s, within earshot of the Globe Theater, were transcribed, and the transcriptions have survived. And we can infer what Shakespeare heard in the company of so-called church papists, Catholics who attended the realm’s reformed churches, and recusants, Catholics who refused to attend and were fined. He would have come across both types in Stratford, elsewhere in Warwickshire, and in Lancashire, had he repaired to the last, as locals there still claim.

But Warwickshire was also home to some of the Midlands’ most respected religiously reformed preachers. Stratford was twice visited by leading Calvinist Thomas Cartwright, whose patron, Robert Dudley, Earl of Leicester, owned a castle at Kenilworth, twelve miles away. And Cartwright once arrived with Job Throckmorton, whom conformists considered a “sanctified puritane.” Elected to Parliament from Warwick in the 1580s, Throckmorton befriended the region’s antipapal polemicists and members of London’s reformist network. At that decade’s end, he was suspected of collaborating with the subversives who pseudonymously published their opposition to conformist bishops and to the prevailing policies and polity of the realm’s reformed church.

Of course, the presence of ardent Catholics and Calvinists in Shakespeare’s shire could mean little. Judging from the late plays he helped compose, which, as James Holstun notices, “sidestep the theological issues that ripped the country apart,” one might say that, as a Stratford student, apprentice, and aspiring player, Shakespeare recoiled from religious polemics. Be that as it may—and even if he self-consciously or subliminally believed the theater was an alternative to the church, a faction-free zone, more peaceful than the clerical estate—his plays are still a source from which we learn much about religious circumstance. In the final three, topical chapters, therefore, Religion Around Shakespeare docks evidence drawn from some plays alongside evidence left by preachers, churchwardens, vestrymen, polemicists, theologians, and diarists—but not to seek cover for a new interpretation of those plays. The aim of Religion Around—of all five chapters—is simply to repossess what its title promises.

Hence, the last three chapters, on religious authority, religious personality, and religious community, respectively, set a few of Shakespeare’s soliloquies, characters, and caricatures next to relevant contemporary religious developments to illustrate ambivalences. Possibly, they were the playwright’s ambivalences, but I am not prepared to conclude as much. Religion Around argues, instead, that they were atmospheric, which is to claim that many doubts about religious hierarchy and solidarity as well as doubts about election or regeneration were very much in the air in the religion around the realm and, closer, the religion around Shakespeare. The misgivings and doubts spilled across party lines. Mistrust of the Jesuits and of the papacy circulated among both Catholics and Calvinists. Desires for greater discipline were not unique to the precisianists now identified as the most “forward” Protestants (or puritans). Moreover, the aggressiveness of reformists, who were disappointed in the trajectory and pace of government-sanctioned reforms, changed over time and from one region to another, as did the remedial measures they favored and conformists’ responses during Queen Elizabeth’s last decade and King James’s first.

Where did Shakespeare fit? Literary historians looking to out him as a Calvinist or a Catholic or a devotee of some “hybrid faith” should find something of interest here, although what follows will fall short of a definitive answer to their questions. I am not mining for that metal. Unquestionably, the playwright borrowed from the religion around him, and what he deposited in his drama “infused” performances, as Leah Marcus says, “with a vitality born of circumstance.” The plays profit from Shakespeare’s “sublimation into high drama of what is casually there at hand.” Nonetheless, to proceed from what was “at hand” and what is now staged so often to a singular scribe’s secrets—to his religious convictions—requires a razzle-dazzle that I am inadequately equipped to attempt.

Circumstance—the religion around the playwright, not his faith or the plays’ proper interpretations—is my subject. I leave Shakespeare’s outlook to others. My challenge is to see how well we can see what he saw when he looked out.