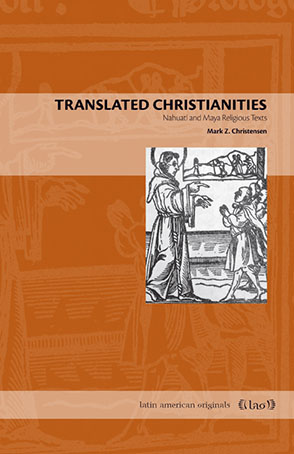 “How to know the success of the evangelization of Mesoamerican peoples during the colonial era? Mark Christensen’s Translated Christianities goes a long way toward answering that question by means of a masterful translation and analysis of selected Nahuatl- and Maya-language ecclesiastical texts by indigenous authors and some clergy, both of whom fashioned local catechisms, confessionals, baptismal treatises, and Christian stories for the edification of their congregations. Thus, ku and altepetl and balche and nixtamal, among many other native concepts in these writings, served to keep the natives’ world real as they contemplated the mysteries of the faith. This work is an important contribution to our field.”—Susan Schroeder, Tulane University

Beginning in the sixteenth century, ecclesiastics and others created religious texts written in the native languages of the Nahua and Yucatec Maya. These texts played an important role in the evangelization of central Mexico and Yucatan. Translated Christianities is the first book to provide readers with English translations of a variety of Nahuatl and Maya religious texts. It pulls Nahuatl and Maya sermons, catechisms, and confessional manuals out of relative obscurity and presents them to the reader in a way that illustrates similarities, differences, and trends in religious text production throughout the colonial period.

The texts included in this work are diverse. Their authors range from Spanish ecclesiastics to native assistants, from Catholics to Methodists, and from sixteenth-century Nahuas to nineteenth-century Maya. Although translated from its native language into English, each text illustrates the impact of European and native cultures on its content. Medieval tales popular in Europe are transformed to accommodate a New World native audience, biblical figures assume native identities, and texts admonishing Christian behavior are tailored to meet the demands of a colonial native population. Moreover, the book provides the first translation and analysis of a Methodist catechism written in Yucatec Maya to convert the Maya of Belize and Yucatan. Ultimately, readers are offered an uncommon opportunity to read for themselves the translated Christianities that Nahuatl and Maya texts contained.

“How to know the success of the evangelization of Mesoamerican peoples during the colonial era? Mark Christensen’s Translated Christianities goes a long way toward answering that question by means of a masterful translation and analysis of selected Nahuatl- and Maya-language ecclesiastical texts by indigenous authors and some clergy, both of whom fashioned local catechisms, confessionals, baptismal treatises, and Christian stories for the edification of their congregations. Thus, ku and altepetl and balche and nixtamal, among many other native concepts in these writings, served to keep the natives’ world real as they contemplated the mysteries of the faith. This work is an important contribution to our field.”—Susan Schroeder, Tulane University

“After the establishment of colonial rule, Mesoamerican peoples were forced to come to terms with Christianity: to accept, reinterpret, or deliberately ignore Christian teachings, or, at the very least, to show up at mandatory catechism classes. Mark Christensen expertly guides the reader through a rich selection of little-known religious writings in native languages, unfolding multiple dimensions of this intercultural confrontation. Ecclesiastics pursued various strategies to persuade, cajole, or frighten indigenous people into compliance, sometimes dressing Christian doctrine in fancy rhetorical clothing and sometimes dumbing it down for audiences they perceived as childlike or crude. Their messages often escaped their control, being reworked in unorthodox ways by indigenous Christians. Concise, yet ranging broadly in time and space, this book shows that, indeed, the processes of translation and adaptation yielded not one but many ‘Christianities.’”—Louise M. Burkhart, University at Albany, SUNY

“This is a major contribution to the history of the missionary enterprise in Mexico in both the colonial and independence periods. Mark Christensen clearly explains the challenge faced by missionaries, both Catholic and Protestant, in attempting to translate European Christian concepts into native languages and cultures that had no equivalents. He shows their inventiveness and the misunderstandings that inevitably resulted. He does this by translating original documents in Nahuatl and Maya and giving the background and analysis of each one. The result is an illuminating and brilliant piece of historical detective work. This work will prove invaluable to professional historians and graduate students alike.”—Stafford Poole, C.M.

“Christensen's brief and gracious introductions to a variety of examples from the Nahua and Maya catechistic corpus provide a compelling point of entry for the study of what is revealed, upon close inspection, to be a diverse and challenging corpus that defies easy generalizations. This work should instruct and engage both undergraduate and specialist audiences.”—David Tavárez, Hispanic American Historical Review

A Note on the Translations

1 Saint Paul and Saint Sebastian in the “Nahuatl Bible”

Neither Castilian nor Latin . . . could more expressively persuade nor teach the mysteries of our Catholic religion than that which this [Nahuatl] work manifests.

It would be very useful to have printed books in the language of these [Mayas] about Genesis and the creation of the world; because they have fables, or very harmful histories, and some of these they have written, and they guard them and read them in their meetings. And I had one of these copybooks that I confiscated from a maestro named Cuytun of the town of Sucopo, who escaped. And I could never have him to know the origin of this his Genesis.

After years of hard work, Ignacio de Paredes submitted his book for publication. It was the year 1759, and the Jesuit priest was hopeful that his Promptuario manual mexicano would help Spanish priests preach the Christian message to the descendants of the Aztecs and the natives of central Mexico. The book was written in the Aztec language, Nahuatl, and its purpose was to provide ecclesiastics with a sermon or speech for every Sunday of the year; all the priest had to do was read from the manual every Sunday and the natives would learn the Christian doctrine. Carlos de Tapia Zenteno, who understood Nahuatl well, had the task of reviewing the book to ensure that it was free of any translation errors. He deemed the book and its conveyance of the doctrine in Nahuatl so eloquent that he claimed, “Neither Castilian nor Latin . . . could more expressively persuade nor teach the mysteries of our Catholic religion.”

In early seventeenth-century Yucatan the secular priest Pedro Sánchez de Aguilar launched a campaign to rid his parish of its wooden and stone representations of ancient deities, or what the Spaniards saw as “idols.” In the process, not only did he find numerous examples of the Mayas practicing idolatry, but, even worse, he found a number of handwritten Maya texts that blended Christian doctrine with precontact Maya beliefs. One case involved a Maya religious assistant—tasked, among other things, with the responsibility of teaching the doctrine—whose religious text conveyed an unorthodox Christian-Maya view of the Creation. To remedy the situation, Sánchez de Aguilar requested the publication of religious texts in Maya that accurately taught the doctrine. Without such books, he claimed that the Mayas “live without light.”

Both examples are representative in a number of ways. To begin, they illustrate the important role religious texts written in Nahuatl and Maya played in the evangelization of central Mexico and Yucatan. These books allowed ecclesiastics and their assistants to convey something of Christianity to the natives. These two examples, however, also demonstrate that texts could vary in their content and doctrinal accuracy. Some religious texts, like that of Paredes, conveyed Christianity in sufficiently orthodox ways, while others, like those Sánchez de Aguilar discovered, failed to do so. Thus, both examples represent two ends of a spectrum with orthodox native-language religious texts on one end, unorthodox texts on the other, and other Nahuatl and Maya texts somewhere in between.

This book provides the reader with the historical context and English translations of a few of the Nahuatl and Maya religious texts that conveyed the Christian doctrine to the Nahuas of central Mexico and the Yucatec Mayas. The purpose of doing so is threefold. First and foremost, these translations will give the English speaker access to the texts that conveyed Christianity to the natives. Native-language religious texts—sermons, confessional manuals, catechisms, and so on—were instrumental in the evangelization of Mexico and Yucatan. Yet the vast majority of these texts remain hidden to the modern reader, shrouded in general anonymity and the difficulty of translating native languages. This book addresses this problem by bringing to light a collection of religious texts in Nahuatl and Maya written between the 1550s and 1860s and gathered from archives throughout Mexico, Europe, and the United States.

The second purpose of this book is to illustrate the diversity of religious texts and their messages. To do so, it brings together English translations of Nahuatl and Maya texts of a similar genre (i.e., catechisms, confessional manuals, sermons) or that discuss a similar theme. This uncommon presentation of the translated texts is necessary for comparative insights into the Nahuatl and Maya works themselves, including authorial influence and their cultural, regional, and temporal adaptations. In a larger sense, a collection of translated Nahuatl and Maya religious texts offers a keener, more comprehensive understanding of the evangelization efforts made in central Mexico and Yucatan.

But evangelization efforts among native peoples were not monopolized by Catholics. Protestant faiths likewise utilized native-language religious texts to aid their proselytization—a largely unstudied fact due to the dearth of surviving works. This book provides a rare glimpse at the Methodist efforts to convert the Yucatec Mayas through a nineteenth-century Methodist catechism translated into Maya. The Methodist tract joins the other texts to enhance our appreciation of the diverse Christian messages native-language texts conveyed.

The third and final purpose of this book is to highlight the range in orthodoxy of religious texts from true and faithful representations of the Faith, to culturally modified redactions of Christianity. Although friars and priests composed religious texts, natives trained in religion and writing also put pen to paper. As a result, many of the texts translated in this book provide insights into how Christian doctrine changed according to the preferences and contributions of both Spanish and native authors. This, combined with the regional, temporal, cultural, and even denominational differences, all gave variety to Nahuatl and Maya religious texts and their translated Christianities.