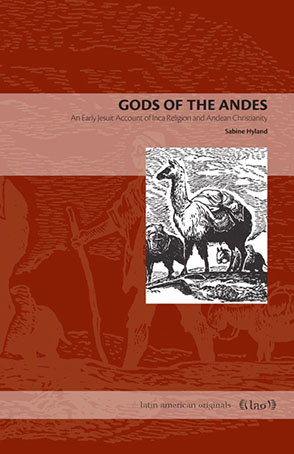 “This work is an exciting addition to the field. It presents a source hitherto unavailable in English; it illustrates aspects of Spanish views of Andean religion that are often neglected; and it considers issues of great contemporary relevance, such as the problem of translation of Christian concepts into native languages. Both the translation and the accompanying substantial commentary are highly readable, and therefore suitable for undergraduate readers and the general reader. This is a scholarly, original, and interesting work.”—Nicholas Griffiths, University of Birmingham

Click here to hear Sabine Hyland interviewed for the podcast Research on Religion.

Gods of the Andes provides the first English translation of the earliest lengthy description of Inca religion, An Account of the Ancient Customs of the Natives of Peru (1594). The Account is part of a Jesuit tradition of ecumenical works on religion that encompasses the more famous writings of Matteo Ricci in China and Roberto de Nobili in India. It includes original descriptions of many different aspects of Inca religion, including human sacrifice, the use of hallucinogens, mummification rituals, the existence of transgendered priests in the ancient Andes, divination rituals based on animal entrails, oracles, burials, and confession.

In her introductory chapters, Sabine Hyland presents the controversial life of the ascribed author, Blas Valera, a Jesuit who was ultimately imprisoned and exiled by the Jesuits for his “heretical” belief that the Incas worshipped the same creator god the Christians did; examines the Account in the light of other colonial writings about the Incas; and outlines what we know about Inca religion through other sources, comparing Valera’s version to those of other writers.

“This work is an exciting addition to the field. It presents a source hitherto unavailable in English; it illustrates aspects of Spanish views of Andean religion that are often neglected; and it considers issues of great contemporary relevance, such as the problem of translation of Christian concepts into native languages. Both the translation and the accompanying substantial commentary are highly readable, and therefore suitable for undergraduate readers and the general reader. This is a scholarly, original, and interesting work.”—Nicholas Griffiths, University of Birmingham

“Not all Spanish missionaries were out to extinguish native Andean religious practices and concepts as works of the devil. Sabine Hyland has focused on an extraordinary mestizo Jesuit, Blas Valera, whose highly sympathetic and perceptive account of the Inca gods and worldview has been vividly brought to life by her excellent translation. This is a major contribution to Andean history and anthropology.”—Michael D. Coe, Yale University

“This translation of An Account of the Ancient Customs of the Natives of Peru is a wonderful addition to the corpus of meticulously edited colonial chronicles available in English. The lengthy and careful treatment of Andean religion by the Jesuit priest Blas Valera is distinctive and fascinating, and its importance is enhanced by our knowledge that, unlike many chroniclers, Valera spoke and understood Quechua and was exposed to native religious customs in several areas. Sabine Hyland’s discussion of the life and writings of Valera successfully provides the cultural and historical context for the manuscript and greatly enriches the volume. I strongly recommend it to all scholars attempting to understand pre-Hispanic Andean religion and the early efforts of Christian missionaries.”—Richard Burger, Yale University

“Sabine Hyland’s book revives a defiant voice from the Americas’ past. By 1594 the last generation born under Inca rule was dying off. A burgeoning colonial clergy was teaching that the ‘Indian’s’ sacred tradition had been nothing but a diabolical fraud. But even as the clergy geared up for ‘extirpation,’ some dissenters boldly claimed that Inca religion included insights into true divinity. One of these dissenters—the anonymous Jesuit whom Hyland identifies as the half-Inca Blas Valera—in 1594 took his stand by combining memories of his mother’s Inca culture with a challenge to colonial power. Hyland’s translation brings to life one vital indigenous source of the New World’s human-rights tradition.”—Frank Salomon, University of Wisconsin–Madison

“[Gods of the Andes] is the ideal supplement and counterpoint to university courses on colonial history of the Americas or early modern religion. . . . This slim volume is positioned to handily prove the wide diversity of religious views held in sixteenth-century Peru, among the Jesuits as well as among Andean converts.”—Karin A. Vélez, Renaissance Quarterly

“Hyland’s translation is as readable as it is faithful to the original, and has the added advantage of coming with a helpful scholarly introduction, unobtrusive annotations, and a glossary of quechua terms. It is a most welcome companion to her excellent monograph on Valera, The Jesuit and the Incas (2003), and an indispensable primary source which will be enjoyed as much by scholars as by general readers.”—Fernando Cervantes, Journal of Ecclesiastical History

“This is a fascinating and sometimes poignant text with much of interest for ethnographers, anthropologists, historians of religion, and cultural and political theorists. All these will find food for thought in this excellent translation and essay by Sabine Hyland. . . . This small book deserves a place on many bookshelves.”—Lesley J. Pattinson, Sixteenth Century Journal

2 Blas Valera: His Life and “Crimes”

Blas Valera, An Account of the Ancient Customs of the Natives of Peru

Latin American Originals (LAO) is a series of primary source texts on colonial Latin America. LAO volumes are accessible, affordable editions of texts translated into English—most of them for the very first time, as is the case with LAO 6. The first half-dozen books in the series illuminate aspects of the Spanish conquests during the century from the 1520s to the 1610s.

Taken in the chronological order of their primary texts, LAO 2, Invading Guatemala, shows how reading multiple accounts of conquest wars (in this case, Spanish, Nahua, and Maya versions of the Guatemalan conflict of the 1520s) can explode established narratives and suggest a conquest story that is more complicated, disturbing, and revealing. LAO 1, Invading Colombia, challenges us to view the difficult Spanish invasion of Colombia in the 1530s as more representative of conquest campaigns than the better-known assaults on the Mexica and Inca empires. LAO 3, The Conquest on Trial, features a fictional embassy of indigenous Americans filing a complaint over the conquest in a court in Spain—the Court of Death. That text, the first theatrical examination of the conquest published in Spain, effectively condenses contemporary debates on colonization into one dramatic package. LAO 4, Defending the Conquest, is a spirited, ill-humored, and polemic apologia for the Spanish Conquest written by a lesser-known veteran conquistador and submitted for publication—without success—in 1613. LAO 5, Forgotten Franciscans, offers a trio of controversial opinions on conversion processes in Mexico, written between 1543 and 1614.

LAO 6, like LAO 5, casts a surprising light on the spiritual conquest, showing how within the church in Spanish America there were wildly divergent views both on native religions and on how to replace them with Christianity. Gods of the Andes presents the first English edition of a 1594 manuscript describing Inca religion and the campaign to convert native Andeans. Discovered in private hands in Spain in the nineteenth century, the manuscript is attributed by scholars to Blas Valera, a Jesuit missionary who died of injuries acquired when the English sacked Cádiz in 1596. Valera is surprisingly sympathetic to pre-Conquest beliefs and practices, viewing them as preparing Andeans for the arrival of the faith he helped bring from Spain.

The source texts to LAO volumes are either archival documents—written in Spanish, Portuguese, or indigenous languages such as Nahuatl, Zapotec, and Maya—or rare books published in the colonial period in their original language (Spanish, Portuguese, Italian, Latin). The contributing authors are historians, anthropologists, art historians, and scholars of literature; they have developed a specialized knowledge that allows them to locate, translate, and present these texts in a way that contributes to scholars’ understanding of the period, while also making them readable for students and nonspecialists.

Sabine Hyland is an ethnohistorian with just this kind of specialized knowledge. She has built upon an Ivy League education, a lifelong fascination with the Andean past, and an acute understanding of Jesuit and Inca history to become one of the world’s leading scholars—perhaps the leader—on Jesuit views of the Incas. As such, she is ideally positioned to package for us Valera’s intriguing take on the religious experience of the Andes in the fifteenth and sixteenth centuries. 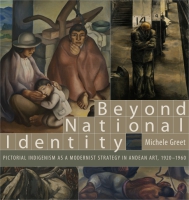 Pictorial Indigenism as a Modernist Strategy in Andean Art, 1920–1960