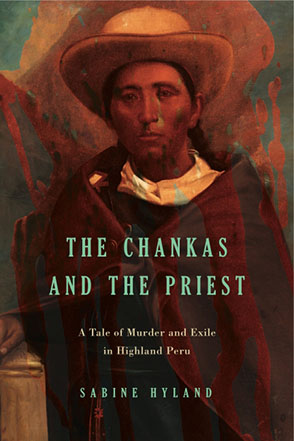 “Based on remarkable archival materials and written in a style that general readers, historians, and anthropologists will appreciate, this book belongs in academic and large public libraries.”—M. A. Burkholder, Choice

How does society deal with a serial killer in its midst? What if the murderer is a Catholic priest living among native villagers in colonial Peru?

In The Chankas and the Priest, Sabine Hyland chronicles the horrifying story of Father Juan Bautista de Albadán, a Spanish priest to the Chanka people of Pampachiri in Peru from 1601 to 1611. During his reign of terror over his Andean parish, Albadán was guilty of murder, sexual abuse, sadistic torture, and theft from his parishioners, amassing a personal fortune at their expense. For ten years, he escaped punishment for these crimes by deceiving and outwitting his superiors in the colonial government and church administration.

Drawing on a remarkable collection of documents found in archives in the Americas and Europe, including a rare cache of Albadán’s candid family letters, Hyland reveals what life was like for the Chankas under this corrupt and brutal priest, and how his actions sparked the instability that would characterize Chanka political and social history for the next 123 years. Through this tale, she vividly portrays the colonial church and state of Peru as well as the history of Chanka ethnicity, the nature of Spanish colonialism, and the changing nature of Chanka politics and kinship from the fifteenth to the eighteenth century.

“Based on remarkable archival materials and written in a style that general readers, historians, and anthropologists will appreciate, this book belongs in academic and large public libraries.”—M. A. Burkholder, Choice

“The result of Hyland’s research and alluring writing style is a mesmerizing microhistory that skillfully connects with, and informs, a broad set of topics focused on the European-American contact experience. . . . The book stands as an inspiration to historians, both new and well-seasoned, who face the excruciating task of bringing order to disparate information scattered across hundreds of pages of colonial documents. It also represents an excellent example of how scholarship can be presented in a personalized voice within a gripping narrative.”—Brian S. Bauer, Hispanic American Historical Review

“Sabine Hyland’s engaging, highly readable microhistory focuses on Pampachiri, a town in highland Peru that many readers will never have heard of. Though the place is obscure, Hyland’s tale manages, like any good microhistory, to make the particular seem universal—or at least broadly pertinent in its representativeness.”—Sylvia Sellers-García, Colonial Latin American Historical Review

“A riveting work that successfully illustrates in great and accurate detail the legacies of abuse that change cultural patterns, personal memories, and social structures, but at the same time resist them. By crafting what she calls a ‘microhistory’ of egregious abuses committed between 1601 and 1611 by a Seville born priest who attempted to recreate, in a remote part of Andahuaylas, the Spanish life from which he had been exiled, Hyland unravels key elements of life in the colonial southern Andes that otherwise might seem dry and irrelevant to the modern reader.”—Kathleen S. Fine-Dare, The Americas

“Based on an amazing wealth of documentation gleaned from archives and private collections on three continents, this marvelous microhistory brings to life the world of the Andean villagers of Pampachiri as they fall under the ruthless exploitation of a sadistic priest. Beginning with a series of events in this small village during the late sixteenth century, Sabine Hyland weaves a vivid story of the foundations and persistence of Chanka ethnicity, the role of the church and its clergy, and the nature of Spanish colonialism. In so doing, she provides a more balanced evaluation of the construction of a new social order.”—Noble David Cook, author of People of the Volcano: Andean Counterpoint in the Colca Valley of Peru

“In this gripping, excitingly narrated history, Sabine Hyland tells the story of a Spanish priest who for a decade abused and bedeviled his parishioners—the Chankas of the village of Pampachiri, in the high Andes of southern Peru. From her extensive research in archives in Spain and Peru, Hyland breathes life into sixteenth- and seventeenth-century documents, producing a remarkable story of priestly depravity met by the staunch resistance of Andean villagers. This is a groundbreaking microhistory of the highest order, deeply informing our understanding of people and events in a remote corner of the colonial Andean world.”—Gary Urton, author of Inca Myths

“A masterful example of how to narrate and analyze at the same time. Sabine Hyland tells a tale that centers on a larger-than-life villain (as all good stories do), reveals a village of victims who struggle against him, and builds to a mysterious denouement—while reconstructing a past society and exploring its complex development over centuries. The result makes for grim and gripping reading.”—Matthew Restall, author of Invading Guatemala: Spanish, Nahua, and Maya Accounts of the Conquest Wars

“By exploring and analyzing the role of cruelty of Albadán in the context of the Chanka social structure, Hyland offers a detailed history of a singular moment in the history of European colonization in Latin America.”—Celso Luiz Terzetti Filho, International Journal of Latin American Religions

Sabine Hyland is Reader in Anthropology at the University of St. Andrews. She is the author of Gods of the Andes: An Early Jesuit Account of Inca Religion and Andean Christianity, also published by Penn State University Press.

Appendix: The Chankas Prior to the Spanish Invasion

Of Cannibals and Kings

Primal Anthropology in the Americas