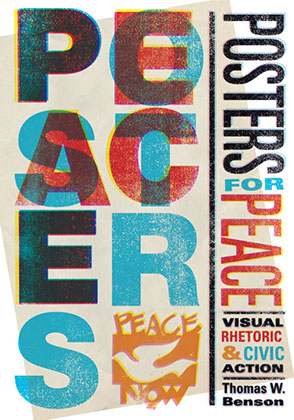 “Thomas Benson has rediscovered and shared a treasure of poster art, along with some history, brilliantly told.”—Tom Hayden,

By the spring of 1970, Americans were frustrated by continuing war in Vietnam and turmoil in the inner cities. Students on American college campuses opposed the war in growing numbers and joined with other citizens in ever-larger public demonstrations against the war. Some politicians—including Ronald Reagan, Spiro Agnew, and Richard Nixon—exploited the situation to cultivate anger against students. At the University of California at Berkeley, student leaders devoted themselves, along with many sympathetic faculty, to studying the war and working for peace. A group of art students designed, produced, and freely distributed thousands of antiwar posters. Posters for Peace tells the story of those posters, bringing to life their rhetorical iconography and restoring them to their place in the history of poster art and political street art. The posters are vivid, simple, direct, ironic, and often graphically beautiful. Thomas Benson shows that the student posters from Berkeley appealed to core patriotic values and to the legitimacy of democratic deliberation in a democracy—even in a time of war.

“Thomas Benson has rediscovered and shared a treasure of poster art, along with some history, brilliantly told.”—Tom Hayden,

“The historical material Benson offers is as valuable as his rhetorical scholarship. The essay gives readers insights into the meanings that the artists and their audiences found in 1970. The plates alone are worth the price of the book, making the volume as a whole valuable for readers interested in art, pop culture, and Vietnam War–era politics as well as visual rhetoric.”—J. E. Frost, Choice

“With Posters for Peace: Visual Rhetoric and Civic Action, Thomas Benson generously shares an archival treasure trove with readers. By itself that might be enough, but Benson doesn't stop there. He offers a thoughtful and sophisticated rhetorical analysis of the posters that reads them in historical context, elaborates the visual traditions from which they drew their representations, and considers how viewers of the era might have responded to them. In doing so, he makes a compelling case for the posters' rhetorical importance, both then and now. The book skillfully models the practice of visual rhetorical history for students and scholars alike.”—Cara Finnegan, University of Illinois

“Long before there was a subdiscipline called ‘visual rhetoric,’ Thomas Benson was probing the rhetorical dimensions of visual images. His books on the films of Frederick Wiseman and on political documentaries set the standard for rhetorically informed criticism of documentary film. Now Benson has turned his attention to the political protest posters that appeared in Berkeley, California, throughout the tumultuous year of 1970. Benson was a visiting assistant professor at UC–Berkeley during the 1969–70 academic year, where he witnessed firsthand the distribution and placement of many of the posters he examines in this book. He places the posters in their political, cultural, social, and rhetorical contexts, and he engages in a close reading that uncovers the layers of meaning and significance that were clear to the creators at the time of production but which now, almost forty-five years later, are often lost in the mists of time. This is a masterful work of recovery that reminds us anew of that time when the whole world was watching.”—Martin J. Medhurst, Baylor University

“Thomas W. Benson's Posters for Peace examines numerous political posters that circulated in Berkeley, California, in 1970 during intense controversies over the Vietnam War and racism. Benson’s critical approach features close examination of the posters in combination with creative comparisons in order to explore their visual rhetoric in the national scene. To develop his central argument, he traces earlier sources of consequence pertaining to posters as a rhetorical medium with an international history. Benson's book offers his readers a wealth of previously unstudied primary materials, which are featured and catalogued in the course of his careful history and criticism of the protest rhetoric.”—Lester C. Olson, University of Pittsburgh

“A beautiful book that captures an ephemeral rhetorical moment and holds it for extended reflection to teach enduring lessons about civic action. This book is for anyone interested in visual rhetoric, social protest, and the possibility of democratic engagement during times of political strife.”—Catherine Helen Palczewski, The Quarterly Journal of Speech

The Berkeley Peace Posters in the Penn State University Collection

This book is an account of the visual rhetoric of a collection of peace posters created in Berkeley, California, in 1970, and of the circumstances in which they were brought into being and given meaning. The posters themselves were a small but telling part of an energetic and diverse movement by American college students in the 1960s and early 1970s against war and racism. Student activism in the United States in the 1960s was part of a loosely connected worldwide movement that took on different forms—most memorably, perhaps, in 1968. The events of May 1970 brought a terrible climax to a long period of confusion and turmoil.

Posters for Peace begins with an extended essay on the rhetorical history of the posters and their immediate and longer-term historical context. It offers close readings of the posters from a rhetorical perspective, with comparisons to other visual examples where appropriate, and with annotations to explain some of the posters’ multiple cultural meanings. The rhetorical approach attempted here regards the posters as addressed to viewers—in this case, by unknown artists to unspecified audiences—and it explores their antecedents, contexts, and forms. Through close reading and comparative analysis, this approach attempts to recover and reimagine the potential experiences invited by the posters as rhetoric. The second section of the book presents a gallery of the Berkeley posters in the Protest Posters Collection at the Penn State University Libraries. The posters themselves are now owned by the Historical Collections and Labor Archives in the Eberly Family Special Collections Library. A condition of their gift to Penn State was that they should be freely available for nonprofit educational uses. They are also available online at the library and at the Flickr Creative Commons.

The close-reading approach is an attempt to recover how the posters might have looked in 1970. This is partly an exercise in recovery—recovery of the meanings that might have been invited by and achieved by these posters in 1970—but also an understanding that the posters are of interest as part of the continuing conversation of American culture. Recovering the meanings that might have been circulating in 1970 is not simply an exercise in taxidermy, the recovery of an inert and bygone moment. Our own historical and political context may distort our capacity to recover the posters’ rhetoric as it existed in 1970. And yet, a reader of this book might very well want to look at these posters precisely to make use of them. Understanding something more about them as part of a context will perhaps make that recovery more useful.

The close reading of visual rhetoric begins by attending to the primary, manifest verbal and visual content, as well as the primary stylistic features—color, form, line, and so on. Comparative, inventional, and audience perspectives guide the analysis. A comparative approach, when undertaken from a rhetorical perspective, as in this study, has multiple, overlapping dimensions. The posters’ direct appeal stems from their location within the larger rhetorical currents of the time—both the “moment” of May 1970 and the broader political and cultural rhetorics of the long 1960s. A comparative approach to the posters as visual rhetoric seeks to invite the reader to view the posters in context and in contrast to earlier and later visual rhetorics that may or may not have been accessible to the artists and audiences of the posters in 1970; such an approach helps us to see what contemporaries probably took for granted, things seen but not explicitly noticed by artists and audiences in 1970. A study of the pre-1970 history of the poster and of political graphics may provide clues into what may be called the inventional rhetoric of the posters—that is, the resources, traditions, and rhetorical iconographies that the poster artists may have consulted, directly or indirectly, as they created the images considered here. A parallel comparative approach attempts to reconstruct what might be called the rhetoric of reception, which takes into account the resources of those who viewed and perhaps recirculated the posters in 1970. These three comparative approaches—of the poster artist, of the 1970 poster viewer, and of the reader who comes upon the posters decades later and seeks to recover them for the present—are not entirely exclusive, but they are conceptually different. In any case, the close readings and the comparisons are undertaken from a rhetorical perspective—this study seeks to understand the posters not primarily as part of the history of art but as works of visual rhetoric and civic persuasion.

The study of rhetoric was itself at a transformative moment in 1970, and that transformation is part of the story I attempt to tell in these pages. In May 1970, the month these posters were circulating in Berkeley, a group of scholars came together in the National Developmental Project in Rhetoric. The 1960s campus politics of civil liberties, civil rights, and peace helped to prompt a redirection and renewal of rhetorical studies; those changes in rhetorical studies, especially the development of studies in visual rhetoric, provide some of the grounding of the present study, and they may be seen as one example of how the 1960s prompted transformations in disciplines across the humanities and social sciences.

In 1970 some art historians would have argued that these posters were mere illustration or graphic design, but not art. Similarly, some rhetorical scholars would have argued that posters were not rhetoric in the full sense of the term—some scholars and gatekeepers saw “rhetoric” as being limited to persuasive verbal discourse, or even more narrowly to public oratory. In this study, I do not ask whether the posters are art or rhetoric (or even whether they are neither). Instead, I assume they are at least in some sense both, and I inquire into how they played their part in the politics of 1970. “Posters,” writes Jeffrey T. Schnapp, “provide a literal, material bridge between the new public sphere constituted by mass communications and the public spaces that become the sites of modern politics as street theater.” For decades, posters had been employed as agencies of state propaganda and popular protest. In The Power of the Poster, Margaret Timmers notes, “By its nature, the poster has the ability to seize the immediate attention of the viewer, and then to retain it for what is usually a brief but intense period. During that span of attention, it can provoke and motivate its audience—it can make the viewer gasp, laugh, reflect, question, assent, protest, recoil, or otherwise react. This is part of the process by which the message is conveyed and, in successful cases, ultimately acted upon. At its most effective, the poster is a dynamic force for change.” So familiar are we with the poster as a rhetorical object that when we notice a poster we instantly understand that it is asking something of us—or of someone. Posters, as they exist in our vernacular cultural experience, are fundamentally rhetorical. In Berkeley, California, in May 1970, student protesters used posters to mobilize citizens for continuing opposition to the Vietnam War in the name of enduring American ideals.

This is a portion of the original introduction, edited for use on the web.