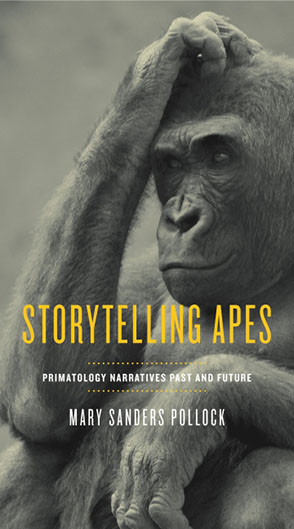 “The lives of our primate cousins, as well as those who study them with passion and devotion, are discerningly revealed by Mary Sanders Pollock, whose chronicle will be avidly read by all field naturalists and, I suspect, by everyone with a love for the natural world.”—Lee Durrell, Durrell Wildlife Conservation Trust

Listen to an interview with author Mary Sanders Pollock on Sierra Club Radio here. The interview begins just past the 13 minute mark.

The annals of field primatology are filled with stories about charismatic animals native to some of the most challenging and remote areas on earth. There are, for example, the chimpanzees of Tanzania, whose social and family interactions Jane Goodall has studied for decades; the mountain gorillas of the Virungas, chronicled first by George Schaller and then later, more obsessively, by Dian Fossey; various species of monkeys (Indian langurs, Kenyan baboons, and Brazilian spider monkeys) studied by Sarah Hrdy, Shirley Strum, Robert Sapolsky, Barbara Smuts, and Karen Strier; and finally the orangutans of the Bornean woodlands, whom Biruté Galdikas has observed passionately. Humans are, after all, storytelling apes. The narrative urge is encoded in our DNA, along with large brains, nimble fingers, and color vision, traits we share with lemurs, monkeys, and apes. In Storytelling Apes, Mary Sanders Pollock traces the development and evolution of primatology field narratives while reflecting upon the development of the discipline and the changing conditions within natural primate habitat.

Like almost every other field primatologist who followed her, Jane Goodall recognized the individuality of her study animals: defying formal scientific protocols, she named her chimpanzee subjects instead of numbering them, thereby establishing a trend. For Goodall, Fossey, Sapolsky, and numerous other scientists whose works are discussed in Storytelling Apes, free-living primates became fully realized characters in romances, tragedies, comedies, and never-ending soap operas. With this work, Pollock shows readers with a humanist perspective that science writing can have remarkable literary value, encourages scientists to share their passions with the general public, and inspires the conservation community.

“The lives of our primate cousins, as well as those who study them with passion and devotion, are discerningly revealed by Mary Sanders Pollock, whose chronicle will be avidly read by all field naturalists and, I suspect, by everyone with a love for the natural world.”—Lee Durrell, Durrell Wildlife Conservation Trust

“Mary Sanders Pollock has written an intelligent, probing, and lucid overview for readers without the time or inclination to read the extensive primatology source material. Her prose is readable and the content sophisticated without being jargon drenched, as published scholarly works commonly are. Storytelling Apes also provides a nudge to scientists to reflect on their role and responsibility to engage in conservation and protection efforts.”—Jonathan Balcombe, Humane Society Institute for Science and Policy

“Mary Sanders Pollock's book analyzes the stories that primatologists tell about the primates they study, as well as our stories about ourselves. While written from a perspective of literary criticism, it extends almost to psychoanalysis of a particular type of person who aspires to be both a scientist and an adventurer. The view of both primates and primatologists, going back to Edgar Allan Poe and Darwin, is fascinating and unique.”—Karen Bales, University of California, Davis

“An invaluable resource for those interested in wild or captive primates, this book inspires introspection.”—L. K. Sheeran, Choice

3. Tragedy of the Field

4. Morphology of the Tale

6. Primatology and the Carnival World

We can no longer speak of reality . . . without considering how the world is altered and created when it is put into words.

I begin this story with a glance at some small monkeys in a small place and a scientist who loves them. The monkeys and the scientist are exemplary.

I look up from the treacherous clay path just as a toucan hops, high in the canopy, from one branch to another, its black silhouette and magnificent yellow beak clearly visible even from my position. “Are you sure it wasn’t a monkey?” asks Lorna Joachim. “When they’re going short distances, toucans sometimes hop like monkeys instead of flying.” Almost as if invoked by our longing, monkey shapes now emerge from the leafy shadows, a hundred feet above our heads. They could be spider monkeys, capuchins, or howlers—three species who share this small forest fragment in northeast Costa Rica. Almost at once, Lorna identifies the shapes as mantled black howler monkeys, who are apparently deciding whether to travel on after napping or lunching.

Lorna sees monkeys in trees because she has a search pattern for the monkeys, consisting of type and speed of movement, size, coloration, location, and the company they keep. For this species, noise is the best identifying feature, but howlers howl only on their own schedules, or if they are protesting someone’s presence. Since following howlers means constantly looking up through backlit branches, the slow, deliberate hopping movements of the monkeys are the first thing that can be spotted from the ground. Howlers are much heavier than the capuchins who also inhabit this area, and less agile than the resident spider monkeys, so they move more slowly. If the light is just right, an observer can see the males’ fluffy white scrotal fur, and if the silhouette can be distinguished clearly from the background, head and body shape are also identifying features. Finally, these howlers typically live and travel in groups of fewer than ten. Their lives are so completely arboreal that, without the search pattern, the follower probably won’t see the monkeys at all in their natural habitat.

While we watch, the small band of males, females (one with a clinging infant), and juveniles start to move gingerly from one branch to another and from one treetop to the next. Since I have never seen howlers except at the zoo, I am surprised by the care with which they pick their way. I had expected a rush of carefree abandon. But even though howlers have evolved to spend the majority of their time at the top of the forest, where the most tender leaves are found, monkeys do sometimes fall, and a fall from such a height would result in death or serious injury.

A single figure stands facing me, reaches up, and grasps the branch overhead, extending to full height. At such a distance, with the light filtering from above and behind, only the shape is visible: I cannot discern the color, sex, or size, although I can observe the monkey’s careful movements, which suggest that it is relatively heavy and therefore an adult. In this dim and tricky light, my field glasses merely enlarge the silhouette. All I can see is that the body in the tree is like mine, even though it is doing something my body could have accomplished only during the most vigorous and adventurous years of my childhood. The monkey takes me up in space and back in time. It awakens my curiosity and my desire for understanding. I could fall in love with these beings and this life.

Lorna has. I witnessed her passion that very night as we shared our beer and played endless card games in the research center dining hall. Suddenly, semiautomatic weapon fire rang out a few yards away, and the howlers abruptly ended their evening canticle. Lorna’s only fear was for the monkeys. The next day, after spending the night acting out the plot of a B movie—in a tiny SUV, on tooth-shattering roads, escaping to a sleazy motel twenty miles away—we found out that a local thug had been squatting in a cabin in La Suerte Bioreserve, which the owners have dedicated to conservation in return for a substantial tax reduction. The interloper was trying to lay claim to the cabin by means of an unusual (and irrelevant) Costa Rican law that discourages absentee ownership, and trying to impress the women he was entertaining with the size of his guns. This time, the monkeys were safe, and so were we. But all that is another story.

This book is about primates worldwide and the scientists who study them. Most primate species—apes, monkeys, and prosimians (lemurs and their close kin)—inhabit equatorial forests, uplands, and savannahs. For scientists from the so-called developed nations, these animals have been exotic, rare, and hard to study in the wild until the last fifty years, when postcolonial expansion opened up remote areas for communication and economic development. Tremendous economic, military, and environmental pressures followed, and many primate species are now on the brink of extinction before ever having been studied in their natural homes. In fact, as Jane Goodall explains in her most recent book, Hope for Animals and Their World (2009), there is reason to believe that many species, including some primate species, could become extinct before they are even seen in the wild by primatologists.

Fortunately, the small groups of howlers, capuchins, and spider monkeys observed by students in Lorna Joachim’s field school belong to some of the best-known nonhuman primate species. Capuchins are the traditional “organ grinders’ monkeys.” Spider monkeys have long been zoo favorites. And howlers in Panama were first studied extensively in the 1930s by C. R. Carpenter, a student of Robert Yerkes, the founder of the discipline of primatology. Even though howlers, capuchins, and spider monkeys are not endangered, every small population is still important because, as habitats shrink and fragment, both the raw numbers and the genetic diversity of whole species decrease.

Throughout Cenozoic time, primates have developed into key players in tropical ecosystems as predators of insects and other small animals, seed dispersers, managers of undergrowth, and thinners of forest canopy. In addition, they make up a significant percentage of the forest biomass. Without primates, the forests that support them would not be themselves. And without the forests, nonhuman primates would be extinct except in zoos and research centers; they would not be themselves, either. Furthermore, almost every serious study of primates in the wild adds to the knowledge of the animals and, indirectly, of humans. Lorna and her students have been especially interested in observing play behaviors and trying to explain the capuchins’ protocultural custom of lime washing: the monkeys scar the skin of a lime, briskly rub their fur with the fruit before discarding it, and start right away with a fresh lime. Although the result is a nice-smelling monkey (at least to human sensibilities) with some insect repellency, we can only surmise that a capuchin might engage in lime washing to get these results. The whole procedure might just be an adaptive accident.

We don’t even know all the questions, much less the answers. Meanwhile, the monkey troops in La Suerte Bioreserve, Lorna’s field site, could be lost to stray bullets shot into the air by show-offs or to the whim of the landlord who owns the reserve, which is not even a forest, but a collection of forest fragments. There could be a change in the tax laws that now shelter the property as a reserve, a sale of the ranch to a banana exporter, a forest fire, an especially destructive hurricane, or some other consequence of global warming. If that loss were multiplied by a dozen, entire wild populations of these monkeys would indeed be at risk. Every field primatologist works on the cusp of a diminishing primate population and incalculable contingencies. Every one of them fears for the animals, with good reason. That is why I have written this book about the stories told by primatologists. 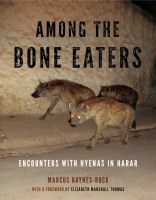