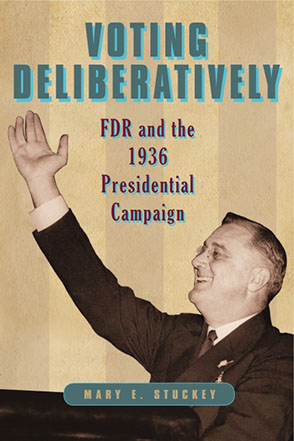 “Stuckey brings important perspective to the first reelection campaign of Franklin D. Roosevelt and persuasively argues for 1936 as the point at which the nation transitioned from the electoral politics born of Martin Van Buren’s genius to the modern campaigns of today. . . . Beyond the interesting story of the campaign itself, this is an important book for understanding the evolution of modern presidential politics.”—Andrew H. Sidman, Political Science Quarterly

The 1932 election of Franklin Delano Roosevelt seemed to hold the promise of Democratic domination for years to come. However, leading up to the 1936 election, persistent economic problems, a controversial domestic agenda, and the perception of a weak foreign policy were chipping away at public support. The president faced unrelenting criticism from both the Left and the Right, and it seemed unlikely that he would cruise to the same clear victory he enjoyed in 1932. But 1936 was yet another landslide win for FDR, which makes it easy to forget just how contested the campaign was. In Voting Deliberatively, Mary Stuckey examines little-discussed components of FDR’s 1936 campaign that aided his victory. She reveals four elements of this reelection campaign that have not received adequate attention: the creation of public opinion, the attention paid to local organizations, the focus on specific kinds of interests, and the public rhetoric that tied it all together. Previous studies of the 1936 presidential election discuss elements such as FDR’s vulnerability before the campaign and the weakness of Republican candidate Alf Landon. But these histories pay little attention to the quantity and quality of information Roosevelt acquired, the importance of organizations such as the Good Neighbor League and the Committee of One, the mobilization of the vote, and the ways in which these organizational strategies fused with Roosevelt’s rhetorical strategies. Stuckey shows how these facets combined in one of the largest victories in Electoral College history and provided a template for future victory.

“Stuckey brings important perspective to the first reelection campaign of Franklin D. Roosevelt and persuasively argues for 1936 as the point at which the nation transitioned from the electoral politics born of Martin Van Buren’s genius to the modern campaigns of today. . . . Beyond the interesting story of the campaign itself, this is an important book for understanding the evolution of modern presidential politics.”—Andrew H. Sidman, Political Science Quarterly

“Drawing on multiple archival sources and her own previous research on FDR, Mary Stuckey has produced the definitive account of the 1936 presidential campaign. If anyone wants to trace our contemporary campaigns back to their source, Stuckey’s book is the place to begin. I highly recommend this book to all students of the American presidency.”—Martin J. Medhurst, Baylor University

“Mary Stuckey’s Voting Deliberatively offers a fresh and innovative analysis of FDR’s campaign rhetoric and organization that makes plain the historical significance and contemporary salience of the 1936 presidential campaign. Stuckey cogently situates 1936 as a critical juncture where old practices began to fade while new practices arose, including opinion polling, building a ground game, segmenting the public, and fostering a personality-based politics. Scholars who wish to understand how presidential campaigns work and how they came to work this way should read Voting Deliberatively.”—Robert Asen, University of Wisconsin–Madison

“To the familiar portrait of Franklin D. Roosevelt as founder of the modern American welfare state, Mary Stuckey adds a fresh portrait of FDR as founder of the modern state of American campaigning.​ With a fine eye for paradox, she demonstrates how citizen politics was simultaneously advanced and undermined during his 1936 campaign through pioneering methods of studying, mobilizing, dividing, and addressing the electorate. For readers interested in Roosevelt’s political arts and/or in how the current mode of electing presidents was first constructed, Voting Deliberatively will be sure to fascinate.”—Bruce Miroff, University at Albany, SUNY

“Mary Stuckey has once again delivered a remarkable gift to readers across the social sciences and humanities. Weaving together several fascinating strands of archival documents, Stuckey reveals the inner workings of the FDR electoral machine as well as how the administration effectively created the modern polling subject. A must-read for students of American politics.”—Davis Houck, Florida State University

“Mary Stuckey’s Voting Deliberatively: FDR and the 1936 Presidential Campaign demonstrates that the roots of many common practices that define both presidential campaigns and the ‘rhetorical presidency’ can be traced to the groundbreaking campaign of Franklin Roosevelt in 1936. Stuckey argues persuasively that the use of polling practices in 1936 set the stage for a redefinition of our understanding of the role of the public. While Roosevelt’s use of multiple means of measuring public opinion, including the then-new technology of polling, helped him overcome strident opposition, the new methods also set the stage for modern campaigns in which public opinion is reduced to a set of data points. Stuckey documents the successful efforts of the Roosevelt campaign to mobilize voters through the creation of organizations focused on the campaign and the candidate—as well as the president’s skillful appeals to various special interests in building the New Deal coalition, a political powerhouse for almost half a century. She also demonstrates that Roosevelt used his message to create a personal coalition, a result that was politically powerful but also led voters to focus on the candidate rather than the underlying ideology.”—Robert C. Rowland, University of Kansas

“Clearly written and accessible to both academics and a general readership, Voting Deliberatively is a welcome addition to the literature on FDR and the 1936 election, the Great Depression, the New Deal, the history of campaigning, and American politics generally.”—Anthony F. Arrigo, Presidential Studies Quarterly

“Stuckey’s research is original, relying on primary sources and culling insights that are sure to add to our overall understanding of this particular campaign and its innovative ideas and protocols. She understands Roosevelt well and is able to provide an objective assessment of the president who, as a master politician, managed partisan politics and key operatives while, at the same time, adding a coalition of extrapartisan groups such as the Good Neighbor League, the Committee of One, Roosevelt Republican League, and Friends of Roosevelt.”—Amos Kiewe, Rhetoric and Public Affairs

Mary E. Stuckey is Professor of Communication and Political Science at Georgia State University, where she focuses on rhetoric and presidential politics. Her most recent books are Rhetoric: A Presidential Briefing Book and The Good Neighbor: Franklin D. Roosevelt and the Rhetoric of American Power.

Introduction: Roosevelt and the 1936 Election 1

2 Empowering the Public, Privileging the Candidate

3 Mobilizing the Vote, Containing the Public 66

4 Speaking for the Public, Empowering the Presidency

Conclusion: The Mass Public and the Presidency