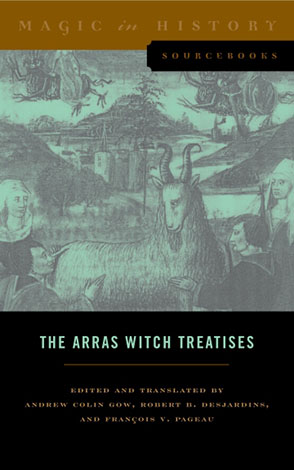 “[This] sourcebook presents a valuable contribution to the study of witchcraft and devil worship in the late medieval imagination. It is intelligible to lay readers, while scholars may find it useful as a brief overview of the Arras affair, with multiple references to more detailed studies on the topic.”—František Novotný, Correspondences

This is the first complete and accessible English translation of two major source texts—Tinctor’s Invectives and the anonymous Recollectio—that arose from the notorious Arras witch hunts and trials in the mid-fifteenth century in France. These writings, by the “Anonymous of Arras” (believed to be the trial judge Jacques du Bois) and the intellectual Johannes Tinctor, offer valuable eyewitness perspectives on one of the very first mass trials and persecutions of alleged witches in European history. More importantly, they provide a window onto the early development of witchcraft theory and demonology in western Europe during the late medieval period—an entire generation before the infamous Witches’ Hammer appeared.

Perfect for the classroom, The Arras Witch Treatises includes a reader-friendly introduction situating the treatises and trials in their historical and intellectual contexts. Scholars, students, and others interested in the occult will find these translations invaluable.

“[This] sourcebook presents a valuable contribution to the study of witchcraft and devil worship in the late medieval imagination. It is intelligible to lay readers, while scholars may find it useful as a brief overview of the Arras affair, with multiple references to more detailed studies on the topic.”—František Novotný, Correspondences

“This new volume offers readable translations with helpful outlines and notes. Reading the accounts written by churchmen whose learning and conviction made them very partial jurors, one gets an eerie picture of the mindset behind the witch craze in late medieval Europe.”—Thomas Willard, Mediaevistik

“The editors’ additions of modern subheadings and the wide, empty margins make the book well-suited to the classroom; the novelty and accessibility of these English translations render the book critical to researchers in the field. The Arras Witch Treatises will hopefully usher Tinctor and du Bois’ texts into the canon of demonological treatises, expanding our grasp of this chilling historical episode and forcing scholars to look afresh at received knowledge.”—Rachel Daphne Weiss, Comitatus

“Provides a well-articulated introduction and excellent primary sources for undergraduate and graduate courses on the topic of witchcraft and the European witch hunts.”—Amanda Pipkin, Sixteenth Century Journal

“The potential of the new edition of the Arras treatises promises to transcend its already valuable contribution for classroom use. It will surely contribute to fine-tuning existing assumptions about fifteenth-century demonology, and students and scholars alike will benefit from its publication.”—Tamar Herzig, Renaissance Quarterly

“There can be no argument, therefore, that a complete translation of Tinctor’s treatise and the anonymous Recollectio, which may have come from the pen of Jacques du Bois, one of the judges in the Arras trials, helps considerably in providing much-needed evidence to fill a gap in our knowledge of an important episode a century or so before the major waves of witchcraft prosecution in Western Europe began to make themselves felt.”—P. G. Maxwell-Stuart, Speculum

“This important work sheds much light on the fifteenth-century origins of the witch craze. The ‘elaborated theory’ of witchcraft described here is absolutely fascinating, not just because it predates the classic era of witch hunting by a century but also because it was so incoherent and contentious and yet terrifyingly relevant to changing social and political conditions. This is a story about medieval superstition as well as the modernity of print and law and state building.”—Malcolm Gaskill, University of East Anglia

“A fascinating glimpse into the mind-set of two promoters of witch hunting who defined demonic heresy and justified the use of cruel tactics to extract confessions. Revealing both similarity to and significant differences from other demonological works, The Arras Witch Treatises offers an exciting new resource for both teaching and scholarship.”—Gary K. Waite, University of New Brunswick

Andrew Colin Gow is Professor of History at the University of Alberta.

Robert B. Desjardins is an independent scholar and a graduate writing advisor at the University of Alberta.

François V. Pageau is a doctoral candidate in medieval history at the University of Alberta.

Anonymous of Arras, A History of the Case, State and Condition of Waldensian Heretics (Witches)

Johannes Tinctor, Treatise Against the Sect of Waldensians (Witches)

Ebenezer Wheelwright, Edited, with an introduction and notes by Richard Kopley