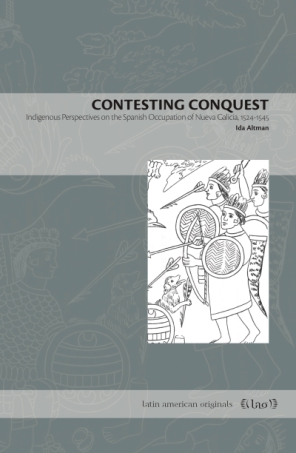 “The quality and quantity of transcribed and translated primary sources available through academic presses for classrooms and researchers constitutes one of the most promising developments in the field of Latin American studies. Ida Altman’s Contesting Conquest: Indigenous Perspectives on the Spanish Occupation of Nueva Galicia, 1524–1545 is both a welcome and a long-needed contribution to this important scholarly genre.”—Dana Velasco Murillo, Hispanic American Historical Review

Contesting Conquest presents an important set of indigenous and Spanish accounts that document Spain’s efforts to establish control over western Mexico during the first half of the sixteenth century.

Though the 1521 defeat of the Mexica of Tenochtitlan signaled the downfall of the Aztec empire, large areas outside of central Mexico still remained beyond the Spaniards’ control. Home to groups such as the Maya of present-day Yucatan and Guatemala and the diverse peoples of western Mexico, these regions were remarkably resilient in the face of Spanish conquest. Ida Altman provides the first English translations of a set of accounts that directly reflect the perspectives of these indigenous peoples. These include a chronicle of Mendoza’s campaign during the Mixton War, a letter from the exiled rebel leader Tenamaztle, and an account written by or on behalf of the rulers of the indigenous community of Xalisco. The narratives are supplemented by translations from Spanish sources that shed light on indigenous-Spanish interaction and conflict. Together these accounts provide insights into indigenous struggles and illuminate the resistance met by their would-be conquerors.

Providing multiple perspectives on Spanish campaigns to conquer modern-day Mexico and giving indigenous voices equal weight to that of the conquistadores, this book is an essential counterpoint to standard narratives of the Spanish conquest. It will be especially useful to students and scholars of Latin American colonial history.

“The quality and quantity of transcribed and translated primary sources available through academic presses for classrooms and researchers constitutes one of the most promising developments in the field of Latin American studies. Ida Altman’s Contesting Conquest: Indigenous Perspectives on the Spanish Occupation of Nueva Galicia, 1524–1545 is both a welcome and a long-needed contribution to this important scholarly genre.”—Dana Velasco Murillo, Hispanic American Historical Review

“In Contesting Conquest, eminent historian Ida Altman has brought us an invaluable teaching tool. These documents, stemming from the Spanish invasion of the Mexican west, come in some cases from Spanish commentators who were truly close to the events and in other cases from indigenous participants. Without diminishing the trauma of conquest, the documents show how hard native people worked to defend their sovereignty, and how they were always at least partly the agents of their own destiny.”—Camilla Townsend, author of Malintzin’s Choices: An Indian Woman in the Conquest of Mexico

“This collection of original documents, and their analysis by Ida Altman, provides a unique perspective on a little-studied part of colonial Mexico, namely, the western region known as New Galicia. These documents stand as a testimony to the conflicts between the Spanish conquerors/colonists and the resistance of the native peoples. Contesting Conquest is essential to understanding the full implications of the conquest of Mexico that was begun by Cortés.”—John F. Schwaller, author of The History of the Catholic Church in Latin America

“Altman's volume presents in very compelling ways a summary of primary sources about one of the earliest and most dramatic indigenous military challenges to the Spanish colonial state: the Mixton War (1540–1542). This work lucidly explores the variety of native responses to colonial might, which ranged from all-out war and annihilation to proud alliances with Spanish conquerors.”—David Tavárez, author of The Invisible War: Indigenous Devotions, Discipline, and Dissent in Colonial Mexico

“Readers will find that Altman’s superb selection of primary sources is the first of this volume’s many virtues. Her clear and succinct introductory chapter, deft and accessible translations, and explanatory sections linking the translations keep readers well situated. Scholars and students alike can enter and better understand this complicated and fascinating history of indigenous participation in the long conquest of greater Mexico.”—Sarah Cline, University of California, Santa Barbara

Ida Altman is Professor of History at the University of Florida. Her most recent book is The War for Mexico’s West: Indians and Spaniards in New Galicia, 1524–1550.

4 Xalisco and the New Order

Timeline for the History of Early Nueva Galicia