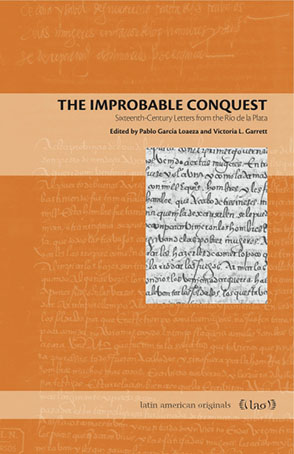 “A contribution that is an essential new approach to the rigorous and non-ideological perception of the ‘River of the Silver’ during the sixteenth century and constitutes a great addition to Latin American postcolonial studies.”—Alejandro Solomianski, Hispania

The Improbable Conquest offers translations of a series of little-known letters from the chaotic Spanish conquest of the Río de la Plata region, uncovering a rich and understudied historical resource. These letters were written by a wide variety of individuals, including clergy, military officers, and the region’s first governor, Pedro de Mendoza. There is also an exceptional contribution from Isabel de Guevara, one of the few women involved in the conquest to have recorded her experiences. Writing about the conditions of settlements and expeditions, these individuals vividly expose the less glamorous side of the conquest, narrating in detail various misfortunes, infighting, corruption, and complaints. Their letters further reveal the colony’s fraught relationship with the native peoples it sought to colonize, giving insight into the complexities of the conquest and the colonization process. Pablo García Loaeza and Victoria Garrett provide an introduction to the history of the region and the conquest’s key players, as well as a timeline and a glossary explaining difficult and archaic Spanish terms.

“A contribution that is an essential new approach to the rigorous and non-ideological perception of the ‘River of the Silver’ during the sixteenth century and constitutes a great addition to Latin American postcolonial studies.”—Alejandro Solomianski, Hispania

“In The Improbable Conquest, Pablo García Loaeza and Victoria Garrett offer English readers an excellent and needed translation of little-known letters from the Spanish conquest of an immense territory—what is today Argentina, Uruguay, Brazil, Paraguay, and Bolivia. These letters bring to light the historical background of the first interactions between Europeans and Native Americans of the Southern Cone. This book is a necessary tool for all Spanish American scholars, particularly those specializing in the first half of the sixteenth century and the Spanish and Portuguese discovery, conquest, and colonization of South America.”—Juan Francisco Maura, University of Vermont

“Through the carefully selected letters of participants, Pablo García Loaeza and Victoria Garrett provide readers with an intimate understanding of the harsh realities of the Spanish conquest and settlement of the often ignored frontier of the Río de la Plata. The vivid voices of leaders of expeditions, clergy, a merchant/artisan, and a woman highlight the tragedy of conflict with indigenous peoples, starvation, a hostile environment, disease, and internecine conflict within the ranks of the conquistadors. This is a book that will provoke discussion and analysis by students in the classroom and in the public sphere.”—Noble David Cook, Florida International University

“The Improbable Conquest offers a highly readable and informative glimpse into an understudied area of the Spanish conquest and colonization of the Americas. The editors deftly render the voices and concerns of a diverse Spanish population in the early years of the founding of the Río de la Plata—women, clergy, conquistadors, and governors—as a rich dialogue between the Spanish crown, church, local populations, and individual circumstances. The introduction provides a lively narrative of the historical context of the conquest, and the introduction to each primary source situates it within the complexities of colonization and scholarship on the topic. This book offers both scholars and students in a variety of disciplines a trove of primary sources and information.”—Kathleen Myers, Indiana University Bloomington

Francisco de Andrada to the Council of the Indies (March 1, 1545)

Latin American Originals (LAO) is a series of primary source texts on colonial Latin America. LAO volumes are accessible, affordable editions of texts translated into English—most of them for the very first time. Of the nine volumes now in print, six illuminate aspects of the Spanish conquests during the long century of 1494–1614, and three push our understandings of the spiritual conquest into surprising new territories.

Taken in the chronological order of their primary texts, LAO 7 comes first. Of Cannibals and Kings presents the very earliest written attempt to describe the native cultures of the Americas. The volume combines the early ethnography by the Catalan Ramón Pané with Spanish accounts of Caribbean societies of the late 1490s. Together they offer striking new insight into how the first Europeans in the Americas struggled from the very start to conceive a New World.

Following the chronological sequence of the sources, LAO 2 comes next. Invading Guatemala shows how reading multiple accounts of conquest wars (in this case, Spanish, Nahua, and Maya versions of the Guatemalan conflict of the 1520s) can explode established narratives and suggest a conquest story that is more complicated, disturbing, and revealing. LAO 1, Invading Colombia, challenges us to view the difficult Spanish invasion of Colombia in the 1530s as more representative of conquest campaigns than the better-known assaults on the Aztec and Inca empires.

This latest volume in the series, LAO 9, takes us further into the sixteenth century and south to the region that would eventually become Argentina. In The Improbable Conquest expert translators and editors Pablo García Loaeza and Victoria L. Garrett have chosen letters written by the Spaniards who tried to found a colony along the hopefully named Río de la Plata. The eight missives, penned between 1537 and 1556, reveal so well the trials and tribulations of those efforts that the persistence of the colonists seems improbable indeed.

LAO 3, The Conquest on Trial, features a fictional embassy of native Americans filing a complaint over the conquest in a court in Spain—the Court of Death. That text, the first theatrical examination of the conquest published in Spain, effectively condensed contemporary debates on colonization into one dramatic package. LAO 4, Defending the Conquest, is a spirited, ill-humored, and polemic apologia for the Spanish Conquest written by Bernardo de Vargas Machuca, a lesser-known veteran conquistador, submitted for publication—without success—in 1613.

Volumes 5, 6, and 8 all explore aspects of Spanish efforts to implant Christianity in the New World. LAO 6, Gods of the Andes, presents the first English edition of a 1594 manuscript describing Inca religion and the campaign to convert native Andeans. Its Jesuit author, Blas Valera, is surprisingly sympathetic to preconquest beliefs and practices, viewing them as preparing Andeans for the arrival of the faith he helped bring from Spain. LAO 5, Forgotten Franciscans, casts new light on the spiritual conquest and the conflictive cultural world of the Inquisition in sixteenth-century Mexico. LAO 5 and 6 both show how there were wildly divergent views within the church in Spanish America both on native religions and on how to replace them with Christianity. Beautifully complementing those two volumes, by revealing the indigenous side of the same process, is LAO 8. In Translated Christianities Mark Christensen presents religious texts translated from Nahuatl and Yucatec Maya. Designed to proselytize and ensure the piety of indigenous parishioners in Central Mexico and Yucatan, these texts show how such efforts actually contributed to the development of local Christianities. As in other parts of the Americas, native cultures thrived within the conversion process, leading to fascinatingly multifaceted outcomes.

The source texts to LAO volumes are either colonial-era rare books or archival documents—written in European languages or in indigenous ones, such as Nahuatl and Maya. The contributing authors are historians, anthropologists, and scholars of literature; they have developed a specialized knowledge that allows them to locate, translate, and present these texts in a way that contributes to scholars’ understanding of the period, while also making them readable for students and nonspecialists. Pablo García Loaeza and Victoria L. Garrett are just such scholars. Both hold doctorates and teach classes in Spanish literature, with broad and complementary specializations in various aspects of Latin American culture—from conquest literature to the origins of patriotism to popular theater—helping them to make this unique and resonant contribution to the LAO series.

No Spanish fleet sailed to the New World without a designated notary charged with keeping an official record of every episode of a conquista. They chronicled routes taken, decisions made, and sentences passed together with their consequences. They noted major and minor details about the weather, the landscape, and the natives they encountered in their journeys. Additionally, everyone felt entitled to write to the authorities. Even in the most remote locations and the direst of straits, the Spanish conquistadors took pen to paper in order to document their actions. They knew they would eventually rely on written accounts to claim rewards for their service, denounce injustices suffered, or justify their own misconduct. It may even be said that their sense of belonging to a civilized society was maintained through writing. Thus, there is an extensive collection of letters written by assorted individuals about the conquest of the New World. They constitute an unofficial record of the colonial enterprise and offer an insider’s point of view of its challenges and hardships.

This selection of sixteenth-century letters from the Río de la Plata provides rare insight into an improbable conquest, an endeavor that tottered on the brink of failure for two decades. From 1536 to 1556, the first settlers of the region were constantly beset by misfortune and plagued by ceaseless infighting. Every time they could, they addressed their woes, their complaints, and their hopes to remote authorities in Spain, exposing the unglamorous side of the conquest. Written by all manner of persons, these texts constitute an underappreciated resource, both as historical documents and as rhetorical artifacts—the tension between these two facets is just one of many topics worthy of further exploration.

A long series of hardships and frustrations prompted the protagonists of this conquest to write. In 1537, Pedro de Mendoza, the first governor and adelantado of the Río de la Plata, wrote to his lieutenant, Juan de Ayolas. He advised him, among other things, to be wary of certain people who might plot treason, recommending that he judge them fairly if he could find enough evidence to put them on trial, or dispose of them discreetly if he could not. The adelantado himself was preparing to sail back to Spain after a series of mishaps that had reduced an exceptionally well-outfitted expedition to abject misery in less than a year. Ayolas never got the letter; he had disappeared into the jungle forevermore. Ayolas’s second in command, the controversial Domingo Martínez de Irala, took over leadership of the colony. The situation did not improve much. In 1541, the original settlement of Buenos Aires was abandoned, and the colonists relocated upriver to Asunción. The following year, the famous castaway Álvar Núñez Cabeza de Vaca reached the new settlement to assume the post of governor and second adelantado. However, he was unable to impose his authority and was removed from power in 1544. The same ship that transported Cabeza de Vaca back to Spain in 1545 carried letters in which the colonists relayed the turbulent events leading up to his arrest and commented on the colony’s situation. In 1556, after the crown had formally recognized Irala as governor, his detractors wrote to complain about the injustices they had suffered and the abuses perpetrated against the natives during his time as acting governor. Irala’s death in late 1556 ended the controversy and marked the end of the first stage of the Río de la Plata conquest. Full of passion, conflict, and strife, the captivating history of this venture truly comes alive in the letters written by the people who lived through it.