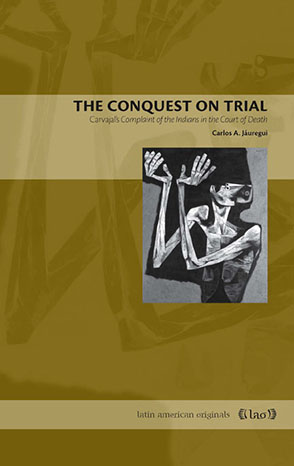 Introduction: The Conquest on Trial: Carvajal’s Complaint of the Indians in the Court of Death

Note on the Translation

Carlos A. Jáuregui and Mark Smith-Soto

Appendix: Facsimile of the 1557 Edition

Carvajal’s Complaint of the Indians in the Court of Death

[E]ven the dead will not be safe from the enemy if he wins. And this enemy has not ceased to be victorious.

In Michael de Carvajal’s Complaint of the Indians in the Court of Death, a group of Indians and their chiefs, already converted to Christianity, travels from the New World to Europe. There, before a tribunal presided over by Death, they denounce the horrors and crimes committed against them by the conquistadors and colonizers in their idolatrous greed for gold. They ask either that the court take away the power of these evil beings or that Death have mercy on them and end their lives to put them out of their misery. Death recognizes the truth of what they say but asks them to have faith that there will be divine justice in the end. Then Saint Augustine, Saint Francis, and Saint Dominic, representing the three mendicant orders evangelizing in the New World, ask the Indians to keep working and trust in God. Saint Dominic even blames the Indies for having corrupted Europe with so much wealth. Finally, Satan, Flesh, and World intervene and explain, with cynical realism and not without a certain sense of humor, that the reasons for the conquest are economic, ultimately having nothing to do with the project of evangelical salvation and everything to do with the gospel of desire (desire for gold, for wealth, for indigenous labor, for pleasure). Thus, the play ends without resolving the petition of the Indians, putting justice off until the afterlife and offering an unapologetic economic and libidinal justification of colonialism (see below, Section 5).

Carvajal’s Complaint of the Indians is a fundamental source for the study of Latin American cultural history. One of the rare sixteenth-century theatrical pieces about the Conquest of the New World, perhaps the first one published in Spain, it represents a condensed compendium of the debates of the day about the justification of conquest, the right to wage war against the Indians, the evangelization of the natives, the discrimination against the newly converted in the New World, the exploitation of Indian labor, the extent of the emperor’s sovereignty, and the right to resist tyranny. Furthermore, Carvajal’s work engages Bartolomé de Las Casas’s theo-political thought, employing many of his evangelical and political metaphors and staging his ideas on war and colonization (see below, Section 4). Yet, at the same time, it defuses and betrays the ultimate purpose of Lascasian discourse (Section 5). This annotated, bilingual edition offers the first English translation of this magnificent play as well as a discussion of its origins and significance.

Descriptively titled here Complaint of the Indians in the Court of Death, in Spanish the work is simply “Cena XIX” (Scene XIX) of twenty-three dramatic pieces brought together under the title The Court of Death, to Which All Estates Come and by Means of Representatives Warn the Living and Teach the Audience, in an Elegant and Delicate Style. Addressed by Luis Hurtado de Toledo to the Invincible Lord, Don Felipe, King of Spain and England, etc., Their Lord and King. In the Year of MDLvij (hereafter The Court of Death). This moral dramatic work by Michael de Carvajal was published by Luis Hurtado de Toledo (ca. 1523–90), with a few of his own additions, on October 15, 1557, as part of a curious volume titled The Court of Chaste Love and The Court of Death, which brings various works on the theme of courtly love together with Carvajal’s piece. Complaint of the Indians is not an “escena” (scene) in the sense of being one subdivision of an act in a play; rather, the scenes of The Court of Death, while thematically interrelated and sharing a similar structure, are relatively autonomous dramatic vignettes.

In these different scenes, various groups of allegorical or moral characters, representing the different estates of the kingdom as well as different professions and nations, parade before Death. As universal judge, Death attends to their complaints of the injustices they have suffered and hears various petitions, including requests to postpone the final hour or to be given a liberating and merciful end. The characters are heterogeneous: shepherds, knights, rich men, prelates, a judge, frivolous nuns, philosophers, bandits, and so on. This macabre procession also includes a variety of other characters: Martin Luther (Hell’s secretary), a group of Spanish Jews in exile, two Moors, and various American Indians and chieftains who lament their mistreatment and the cruelties committed against them in the New World. The cast of each piece includes a group of saints (Saint Augustine, Saint Jerome, Saint Francis, and Saint Dominic) that intervenes, as well as the opposing characters of Flesh, World, and Satan. Death, helped by the saints, lectures the complainants, asks them to reject the pleasures and possessions of the material world, and announces the final and definitive justice of God.

Given the number of scenes and their relative autonomy, it is possible that, as Joseph Gillet believes, The Court of Death was never staged, at least as a dramatic unit. On the other hand, William Shoemaker maintains, looking at other multiple-scene plays from the period, that the length of The Court of Death is not per se an argument against the possibility of its being performed. In fact, frequent dramatic directions within the text—such as “The trumpets sound and the Indians enter” in Complaint of the Indians—would indicate that it was written to be performed. Furthermore, the structure of “retablos” or theatrical vignettes could even have facilitated the representation of one or a group of the different “escenas.”

In general, information about sixteenth-century theatrical representations is scarce. The fact that we have two references to the staging of a play titled Cortes de la Muerte is remarkable: in 1571, the “tailor Diego de Berrío, resident of San Marcos, represented the play El convite de Abraham, winning one of the awards; the other one was given to Luis de Cerdeño [or Cerdeña] for the theatrical representation of Las cortes de la Muerte.” Sánchez Arjona believes that this may be “the same play represented the year before in that city by Cristóbal Hernández, or maybe that one published in 1557, started by Miguel de Carvajal, and finished by Luis Hurtado de Toledo.”