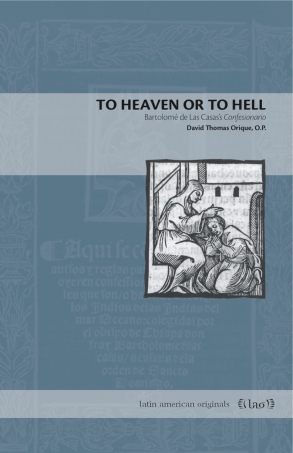 This volume is the first complete English translation and annotated study of Bartolomé de Las Casas’s important and provocative 1552 treatise commonly known as the Confesionario or Avisos y reglas. A text that generated controversy, like Las Casas’s more famous Brevísima relación, the Confesionario outlined a strikingly novel and arguably harsh use of confession for those administering the sacrament to conquistadores, encomenderos, slaveholders, settlers, and others who had harmed the indigenous people, thus using magisterial authority and jurisdictional power to promote restitution.

David Orique addresses how, from 1516 to 1547, Las Casas subscribed to and wrote about the theory and practice of the doctrine of restitution. He then presents the specific historical context of the development of the initial manuscript of the Confesionario in 1547 as Doce reglas (Twelve Rules), which later became the augmented Confesionario manuscript. Orique’s commentary on the 1552 Confesionario treatise highlights how Las Casas’s Argumento, and its approval by theologians, legitimates his work. Orique outlines the various guidelines proposed to confessors to identify, investigate, and seek restitution from offending Spaniards based on their possessions and circumstances. He also explores Las Casas’s use of the Thomistic tripartite scheme of divine, natural, and human law.

With insightful analysis and commentary accompanied by an eminently readable translation, To Heaven or to Hell will be especially useful to students and scholars of Latin American colonial history, early modern religion, and Catholic studies.

“Fr Orique has rendered a considerable service to students of sixteenth-century Spain with this edition.”—Alastair Hamilton, Heythrop Journal

“A welcome addition to the burgeoning field of Lascasian studies. Recent scholarship on Las Casas’s works has been characterized by expanding the canon to include lesser-known texts. The volume under review exemplifies this trend.”—Raúl Marrero-Fente, Renaissance Quarterly

“This is an important and long overdue work. David Orique’s study of how Bartolomé de las Casas used confession as a tool in his long struggle for justice for the indigenous people is compelling and faithful to the historical record. This is a major new source on one of the principal elements in the evolution of modern human rights, in which Las Casas was the central actor in the long sixteenth century.”—Lawrence Clayton, author of Bartolomé de las Casas and the Conquest of the Americas

David Thomas Orique, O.P., is Associate Professor of History and Director of the Latin American and Latino/a Studies Program at Providence College.

Bartolomé de Las Casas’s Confesionario: “I Mandate Justice . . .”; The Last Fork in the Road to Heaven or Hell

This book offers the first complete and annotated English translation of Bartolomé de Las Casas’s little-known 1552 publication of the Confesionario para los confesores (Confessionary for confessors)— also commonly referred to as Avisos y reglas para los confesores de españoles (Advice and rules for confessors of Spaniards). In this provocative theological treatise, which generated controversy akin to that of his widely known legal tract—the Brevísima relación de la destruición de las Indias (Very Brief Account of the Destruction of the Indies), the Dominican bishop of Chiapa mandated a strikingly innovative and allegedly harsh use of the Sacrament of Penance and Reconciliation (that is, of confession) when confessors administer this sacrament to conquistadors, encomenderos, slaveholders, settlers, merchants, miners, ranchers, and any others who had maltreated or profited from the indigenous people. This groundbreaking sixteenth- century treatise stipulated that confessors were required to ask these Spaniards to make a secular and legal public pledge prior to or upon entering the sacred and private reception of the sacrament, which obligated them to restore what they had taken unjustly from the indigenous people and to make restitution for the spiritual and physical harms done and for ill-gotten financial gains acquired. If these penitents did not pledge to make restitution as specified, the confessor could not absolve these Spaniards’ sins. Consequently, without sacramental absolution, these Spaniards would remain in mortal sin. According to Catholic theological understanding of the time, dying in such an unabsolved state would bar them from eternal salvation and condemn them to the fires of hell.

While conforming to the dictates of the Confesionario would facilitate eternal salvation for the guilty Spaniards, its benefits for the indigenous peoples were both eternal and temporal. Early in his life, Las Casas maintained that the “primary and ultimate end” of the presence of the Spaniards in the Americas was the salvation of the native inhabitants and that their conversion required peaceful and persuasive evangelization, the method of catechizing that would result in their being baptized. Consequently, he condemned the wars against and the enslavement of the indigenous inhabitants because the unjust conquests and the exploitative colonization obstructed their evangelization and conversion, as well as deprived them of their lands and culture, of their sovereignty and freedom, and of life itself. In his struggle for temporal justice for the native peoples, Las Casas demanded publicly binding restitution as well as sacramental penance and absolution.

To better understand why and how Las Casas used the sacrament of confession as an ecclesiastical tool to achieve justice for the indigenous peoples, chapter 1 begins with Las Casas’s own experience as a confessee, which in time revealed his own spiritual blindness, initiated his conversion of heart, and prompted his own act of restitution. Chapter 1 then presents how from 1514 to 1546 he explicated and promoted the doctrine and practice of restitution as a remedy for harms done. Chapter 2 introduces the reader to Las Casas’s bold use of the sacrament by presenting the genesis of the first Confesionario manuscript during 1546 and 1547. The chapter continues with the trajectory of events that shaped and generated his 1552 publication of an augmented Confesionario in a treatise titled Aquí se contienen unos avisos y reglas para los confesores que oyeren confesiones de los españoles que son o han sido en cargo a los indios de las Indias del mar Océano, colegidas por el obispo de Chiapa don fray Bartolomé de Las Casas o Casaus, de la orden de Sancto Domingo. Chapter 3 offers an analytic commentary on the text of the Confesionario to elucidate general distinctive features of the treatise, as well as specific salient aspects of its Argumento, Doce reglas, and Adición. This chapter concludes with a brief synoptic discussion of the relationship of justice to restitution. These three introductory chapters are followed by the first complete English and annotated translation of the 1552 publication.

The Sacrament of Penance and Religious Life in Golden Age Spain