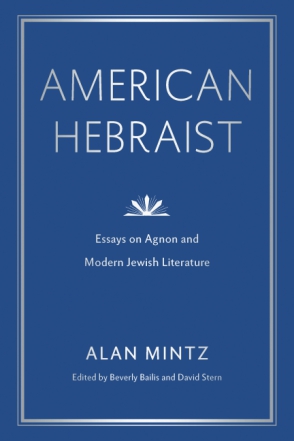 American Hebraist collects fifteen of Mintz’s most insightful articles and essays. The topics range from the life and work of Nobel Prize winner S. Y. Agnon—including a chapter from Mintz’s unfinished literary biography of that author—to Jewish and Israeli literature, the Holocaust, and a rare autobiographical essay. The chapters are introduced and contextualized by Mintz’s longtime colleague and friend David Stern, who opens the book by tracing the arc of Mintz’s intellectual career; the volume concludes with a personal essay and remembrance written by Beverly Bailis, the last student to complete a doctorate under Mintz’s direction.

Brimming with erudition and intriguing biographical notes, American Hebraist provides new insights into the life and work of one of the twentieth century’s most important scholars of modern Hebrew literature. Students and scholars alike will benefit from this essential companion to Mintz’s scholarship.

Beverly Bailis is Assistant Professor of Modern Jewish Literature and Director of Academic Planning and Assessment at The Jewish Theological Seminary.

Borges Beyond the Visible