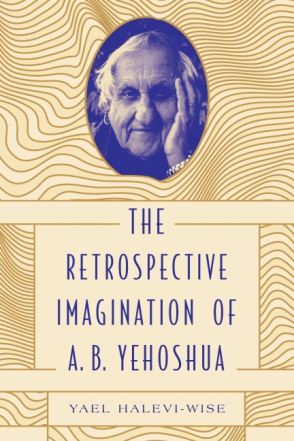 “Yael Halevi-Wise’s book on A. B. Yehoshua is a useful, intelligent introduction to the fiction of arguably the most talented Israeli novelist.”—Dan Miron, author of From Continuity to Contiguity: Toward a New Jewish Literary Thinking

Once referred to by the New York Times as the “Israeli Faulkner,” A. B. Yehoshua’s fiction invites an assessment of Israel’s Jewish inheritance and the moral and political options that the country currently faces in the Middle East. The Retrospective Imagination of A. B. Yehoshua is an insightful overview of the fiction, nonfiction, and hundreds of critical responses to the work of Israel’s leading novelist.

Instead of an exhaustive chronological-biographical account of Yehoshua’s artistic growth, Yael Halevi-Wise calls for a systematic appreciation of the author’s major themes and compositional patterns. Specifically, she argues for reading Yehoshua’s novels as reflections on the “condition of Israel,” constructed multifocally to engage four intersecting levels of signification: psychological, sociological, historical, and historiosophic. Each of the book’s seven chapters employs a different interpretive method to showcase how Yehoshua’s constructions of character psychology, social relations, national history, and historiosophic allusions to traditional Jewish symbols manifest themselves across his novels. The book ends with a playful dialogue in the style of Yehoshua’s masterpiece, Mr. Mani, that interrogates his definition of Jewish identity.

Masterfully written, with full control of all the relevant materials, Halevi-Wise’s assessment of Yehoshua will appeal to students and scholars of modern Jewish literature and Jewish studies.

“Yael Halevi-Wise’s book on A. B. Yehoshua is a useful, intelligent introduction to the fiction of arguably the most talented Israeli novelist.”—Dan Miron, author of From Continuity to Contiguity: Toward a New Jewish Literary Thinking

“The work of A. B. Yehoshua—one of Israel's most important writers since the 1960s—has long merited a full, book-length study in English. Yael Halevi-Wise's book has the virtue of broad scope, including commentary on a range of works from Yehoshua’s earliest writing up to his latest novel, from 2018. It offers an overview of his multilayered narrative techniques as well as chapters on a variety of themes and signature moves in his oeuvre.”—Naomi Sokoloff, coeditor of What We Talk about When We Talk about Hebrew (And What It Means to Americans)

“For anyone looking to better understand the artistry of Yehoshua’s fiction or to better decipher his novels’ messages, this book is indispensable.”—Philip Hollander, Sephardic Horizons

Yael Halevi-Wise is Associate Professor and Chair of Jewish Studies at McGill University. She is the author of Interactive Fictions: Scenes of Storytelling in the Novel and the editor of Sephardism: Spanish Jewish History and the Modern Literary Imagination.

Note on Translation and Transliteration

7. Love under the burden of history

Coda: A playful conversation about Jewish identity with the author of Mr. Mani

Borges Beyond the Visible