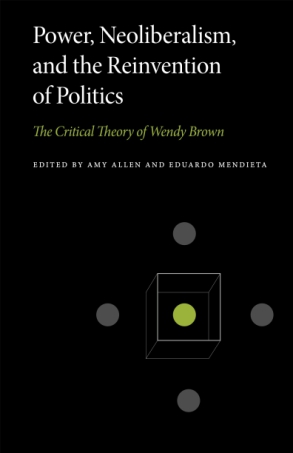 Coeditors Amy Allen and Eduardo Mendieta provide an overview of Brown’s work, situating her scholarship in relation to some of the major thinkers and methodologies of the Frankfurt School. Brown opens the discussion with a new essay expounding upon the meaning of freedom and the prospects for emancipation in our current political moment. Subsequent chapters address different aspects of Brown’s corpus, including her early feminist interpretation of the history of political theory, her influential critiques of identity politics and progressive philosophies of history, and her recent interrogation of the rise of neoliberalism and the resurgence of authoritarian politics. The volume concludes with Brown’s response to her critics, where she clarifies and expands upon the implications of her core ideas.

In addition to Brown and the editors, the contributors to this volume include Robin Celikates, Loren Goldman, Asad Haider, Robyn Marasco, and Johanna Oksala.

Amy Allen is Distinguished Professor of Philosophy and Women’s, Gender, and Sexuality Studies at The Pennsylvania State University.

Eduardo Mendieta is Professor of Philosophy and Latina/o Studies and affiliated faculty at the School of International Affairs and in the Bioethics Program at The Pennsylvania State University.