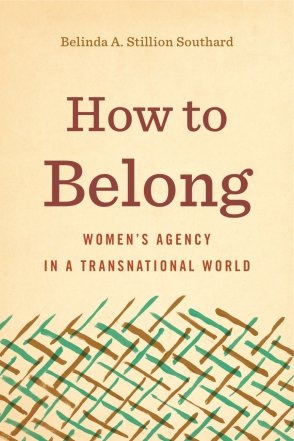 “In this provocative and compelling book, Belinda Stillion Southard offers an illuminating answer to the fundamental question of how people assert their membership in political communities. Considering cases of women's leadership in Africa, Stillion Southard unpacks the complex rhetorical dynamics of agency in a transnational era. She explores how women overcame skepticism and hostility at regional, national, and international levels to articulate roles as indispensable community members. How to Belong offers key insights on the relationship between individual and community.”—Robert Asen, author of Democracy, Deliberation, and Education

In How to Belong, Belinda Stillion Southard examines how women leaders throughout the world have asserted their rhetorical agency in troubling economic, social, and political conditions. Rather than utilizing the concept of citizenship to bolster political influence, the women in the case studies presented here rely on the power of relationships to create a more habitable world.

With the rise of global capitalism, many nation-states that have profited from invigorated flows of capital have also responded to the threat of increased human mobility by heightening national citizenship’s exclusionary power. Through a series of case studies that include women grassroots protesters, a woman president, and a woman United Nations director, Stillion Southard analyzes several examples of women, all as embodied subjects in a particular transnational context, pushing back against this often violent rise in nationalist rhetoric. While scholars have typically used the concept of citizenship to explain what it means to belong, Stillion Southard instead shows how these women have reimagined belonging in ways that have enabled them to create national, regional, and global communities.

As part of a broader conversation centered on exposing the violence of national citizenship and proposing ways of rejecting that violence, this book seeks to provide answers through the powerful rhetorical practices of resilient and inspiring women who have successfully negotiated what it means to belong, to be included, and to enact change beyond the boundaries of citizenship.

“In this provocative and compelling book, Belinda Stillion Southard offers an illuminating answer to the fundamental question of how people assert their membership in political communities. Considering cases of women's leadership in Africa, Stillion Southard unpacks the complex rhetorical dynamics of agency in a transnational era. She explores how women overcame skepticism and hostility at regional, national, and international levels to articulate roles as indispensable community members. How to Belong offers key insights on the relationship between individual and community.”—Robert Asen, author of Democracy, Deliberation, and Education

“How to Belong offers a powerful account of how women leaders negotiate geographical and gendered boundaries of peacemaking and belonging in a transnational world. Drawing on transnational feminist rhetorical scholarship and studies in global governance, Belinda Stillion Southard interweaves an incisive analysis of the embodied rhetorical strategies of West African and South American women leaders and their imagining of cosmopolitan citizenship and in the process opens up important new understandings of feminist rhetorical agency as a politics of relation.”—Wendy S. Hesford, author of Spectacular Rhetorics: Human Rights Visions, Recognitions, Feminisms

“Original and compelling, How to Belong transforms citizenship from a matter of location to one of embodied belonging and relationship. Through her riveting analyses, Southard reveals how women’s rhetorical practices—in West African peace networks, Liberian elections, and UN global governance—create regional, national, and global relationships, and in her careful arguments, she brilliantly enlarges our knowledge of performative deliberation, women’s rhetoric, and transnationalism.”—Arabella Lyon, author of Deliberative Acts: Democracy, Rhetoric, and Rights

“How to Belong makes important interventions into rhetorical studies of national belonging, women’s agency, and citizenship, all from case studies embedded in deeply intertwined transnational contexts. Stillion Southard joins a small but powerful group of transnational feminist rhetoric scholars by expertly showing connections across often disparate and confrontational subject positions—protesters, politicians, and leaders of international governance organizations. A must-read for any scholar interested in the rhetorical ingenuity of women around the globe.”—Karma Chavez, author of Queer Migration Politics: Activist Rhetoric and Coalitional Possibilities

“How to Belong is a must-read for anyone interested in on-the-ground feminist rhetorical agency in action. It shows how, across the globe, women have used rhetorical acuity and skill not only to reimagine and negotiate change in their communities but also to craft new notions of belonging that reach beyond the nation-state.”—Rebecca Dingo, author of Networking Arguments: Rhetoric, Transnational Feminism, and Public Policy Writing

Belinda Stillion Southard is Associate Professor of Communication Studies at the University of Georgia. She is the author of Militant Citizenship: Rhetorical Strategies of the National Woman’s Party, 1913–1920, winner of the 2012 Marie Hochmuth Nichols Book Award.

Introduction: Rhetorics of Belonging in a Transnational World

Conclusion: How to Belong (or Not) to the Nation-State

Resoundingly, scholars have answered these questions by reimagining belonging as expanded or reconfigured meanings of citizenship. Studies from geography, international relations, political science, anthropology, women’s studies, and rhetorical studies have offered concepts such as global citizenship, corporate citizenship, cosmopolitan citizenship, and cultural citizenship to explain current challenges to national citizenship. In his study of global community, Robert DeChaine’s research query is illuminating: “Given the shifting nature of the relationships between local, national, and global ‘loyalties[,]’ . . . what form(s) of citizenship will dominate in a globalized world?” Centering on citizenship makes sense because historically, the idea of belonging to a defined place—a place with boundaries both real and imagined—can be traced back to Greco-Roman ideals of belonging as citizenship. Classically construed, citizenship to a city-state was defined by the ability to speak before and be recognized by one’s community. No doubt, this ability was and continues to be granted to an exclusive group. Nonetheless, to belong to a city-state meant to practice rhetoric, and to practice rhetoric meant that one could shape the city-state. In terms of the modern democratic state, if one is recognized as a citizen, then one is likely able to address one’s community in ways that officially “count”: for example, voting, petitioning, speaking in town halls, writing for editorial columns. Similarly, being able to access education, health care, and tax breaks allows one to imagine, as Benedict Anderson posited, that one belongs to an educated, healthy, and equitable community of national citizens.That said, it is no secret that the ideals and the realities of citizenship belonging can diverge, and quite radically so. A robust body of scholarship examines national citizenship for how it works as a rhetorically shaped and contested construct, as an enabling and (violently) disabling category, and as an ideologically and historically fraught ideal. Many rhetorical studies expose how political elites crafted arguments in favor of or against citizenship rights—arguments shaped in part by their constituents’ demands for enhanced or restricted citizenship rights. Studies also demonstrate how those excluded from the national community, legally and otherwise, have rhetorically challenged the laws and social norms of exclusion toward inclusion and more so, toward revised ideals. Some studies debunk citizenship altogether because of the violent exclusions that accompany nationalist projects to define membership. That said, studies of extremely violent protests against the nation-state argue that protest groups engage in violence in part because they recognize that the state apparatus possesses remarkable legal and rhetorical power to define who belongs and how.Because of the historical and complicated relationship between rhetoric and citizenship, as practices and as ideals, it’s no wonder that when attempting to explain belonging in light of recent challenges to the power of the nation-state,scholars have done so in terms of citizenship. My intervention into these conversations seeks to account for how globalization has provoked reimaginings of belonging to relationships and places in ways that decenter national citizenship. Consider, for example, that over the last two decades, we have witnessed the regional mobilization of women antiwar protesters bring an end to years of bloody conflicts in West African nations. Likewise, among democratic nations, we’ve witnessed a sharp uptick in the direct election of women presidents—the most difficult way for a woman to access the presidency—who are explicitly committed to mainstreaming women’s rights in their nations and across the globe. Further, the world has seen the organization of global governing bodies primarily dedicated to empowering women and girls worldwide. These phenomena suggest that as membership in the nation-state has become increasingly tenuous and contentious, women have reimagined belonging in ways that have enabled them to negotiate belonging to regional, national, and global communities and, in the process, to redefine belonging to a transnational world in kinder, more favorable ways.[Excerpt ends here.]

Votes That Count and Voters Who Don’t

How Journalists Sideline Electoral Participation (Without Even Knowing It)

Homeless Advocacy and the Rhetorical Construction of the Civic Home