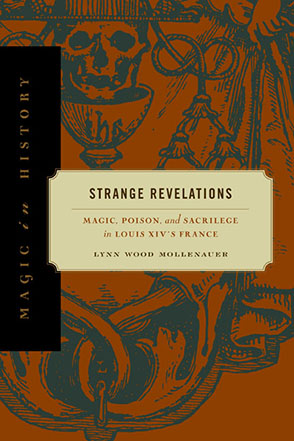 “Strange Revelations effectively explores the multiple ways in which power was exercised at the court of Louis XIV, focusing on the ‘hidden forms’ effected through poison and magic. Mollenauer does an excellent job of probing these issues through close analysis of the records left to us concerning the ‘Affair of the Poisons.'”—James R. Farr, Purdue University

The Affair of the Poisons was the greatest court scandal of the seventeenth century. From 1679 to 1682 the French crown investigated more than 400 people—including Louis XIV’s official mistress and members of the highest-ranking circles at court—for sensational crimes. In Strange Revelations, Lynn Mollenauer brings this bizarre story to life, exposing a criminal magical underworld thriving in the heart of the Sun King’s capital.

The macabre details of the Affair of the Poisons read like a gothic novel. In the fall of 1678, Nicolas de la Reynie, head of the Paris police, uncovered a plot to poison Louis XIV. La Reynie’s subsequent investigation unveiled a loosely knit community of sorceresses, magicians, and renegade priests who offered for sale an array of services and products ranging from abortions to love magic to poisons known as “inheritance powders.” It was the inheritance powders (usually made from powdered toads steeped in arsenic) that lent the Affair of the Poisons its name. The purchasers of the powders gave the affair its notoriety, for the scandal extended into the most exalted ranks of the French court.

Mollenauer adroitly uses the Affair of the Poisons to uncover the hidden forms of power that men and women of all social classes invoked to achieve their goals. While the exercise of state power during the ancien régime was quintessentially visible—ritually displayed through public ceremonies—the affair exposes the simultaneous presence of other imagined and real sources of power available to the Sun King’s subjects: magic, poison, and the manipulation of sexual passions.

Highly entertaining yet deeply researched, Strange Revelations will appeal to anyone interested in the history of court society, gender, magic, or crime in early modern Europe.

“Strange Revelations effectively explores the multiple ways in which power was exercised at the court of Louis XIV, focusing on the ‘hidden forms’ effected through poison and magic. Mollenauer does an excellent job of probing these issues through close analysis of the records left to us concerning the ‘Affair of the Poisons.'”—James R. Farr, Purdue University

“The latest in the distinguished Magic in History series of the Pennsylvania State University Press, Lynn Wood Mollenauer’s Strange Revelations: Magic, Poison, and Sacrilege in Louis XIV’s France (2007) is a well-researched and convincing introduction to and nearly definitive book on the subject. This paradoxical fact results from the lack of further sources for research: thus Mollenauer has done just about all that can be done on poisoning and black magic in late seventeenth-century Paris.”—Orest Ranum, H-France Book Reviews

“This book is a worthy contribution to the Magic in History Series: in fact, it is spellbinding.”—Camille Weiss, Renaissance Quarterly

“It is well researched and an enjoyable read. Undergraduate students should digest it without resistance, and teachers can find much in it to provoke discussion, including but not limited to the obvious evidentiary problem. It should be on everyone’s reading list.”—John J. Hunt, Journal of Church and State

“For anyone with an interest in the history of magic, Strange Revelations contains fascinating revelations indeed.”—Jeffrey Freedman, Church History

“This intelligent and well-written study deserves a wide readership among historians in general and is accessible enough for undergraduate students as well the literate public.”—Malcolm Greenshields, Catholic Historical Review

Lynn Wood Mollenauer is Assistant Professor of History at the University of North Carolina at Wilmington.

2. Medea and the Marquise: Understanding the Crime of Poison in Seventeenth-Century France

3. The Criminal Magical Underworld of Paris

4. The Renegade Priests of Paris and the Amatory Mass

5. The Magic of Mistresses at the Court of Louis XIV

Conclusion: The End of Magic?

Textual Amulets in the Middle Ages