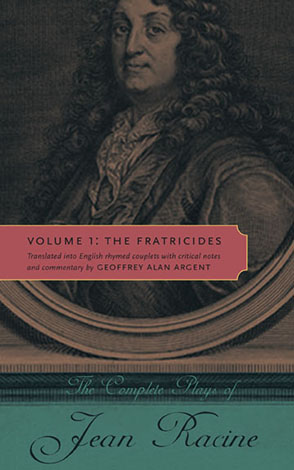 Winner of the thirty second annual American Book Award for 2011 as sponsored by The Before Columbus Foundation.

This is the first volume of a planned translation into English of all twelve of Jean Racine’s plays—a project undertaken only three times in the three hundred years since Racine’s death. For this new translation, Geoffrey Alan Argent has taken a fresh approach: he has rendered these plays in rhymed "heroic" couplets. While Argent’s translation is faithful to Racine’s text and tone, his overriding intent has been to translate a work of French literature into a work of English literature, substituting for Racine’s rhymed alexandrines (hexameters) the English mode of rhymed iambic pentameters, a verse form particularly well suited to the highly charged urgency of Racine’s drama and the coiled strength of his verse.

Complementing the translations are the illuminating Discussions and the extensive Notes and Commentaries Argent has furnished for each play. The Discussions are not offered as definitive interpretations of these plays, but are intended to stimulate readers to form their own views and to explore further the inexhaustibly rich world of Racine’s plays. Included in the Notes and Commentary section of this translation are passages that Racine deleted after the first edition and have never before appeared in English.

The full title of Racine’s first tragedy is La Thébaïde ou les Frères ennemis (The Saga of Thebes, or The Enemy Brothers). But Racine was far less concerned with recounting the struggle for Thebes than in examining those indomitable passions—in this case, hatred—that were to prove his lifelong focus of interest. For Oedipus’s sons, Eteocles and Polynices (the titular brothers), vying for the throne is rather a symptom than a cause of their unquenchable hatred—so unquenchable that by the end of the play it has not only destroyed these twin brothers, but has also claimed the lives of their mother, their sister, their uncle, and their two cousins as collateral damage. Indeed, as Racine acknowledges in his preface, “There is hardly a character in it who does not die at the end.”

The Fratricides: Notes and Commentary

The reader will permit me to beg a little more indulgence for this play than for the others that follow it. I was quite young when I wrote it. Some verses that I had produced at that time fell by chance into the hands of certain persons of good taste. They exhorted me to write a tragedy and proposed as its subject the Saga of Thebes. This subject had been treated earlier by Rotrou under the title of Antigone. But he had the brothers die at the beginning of the third act. The rest of the play was in effect the beginning of a new tragedy, in which entirely new interests were introduced. And thus he had combined in a single play two different actions, one making use of the material of Euripides’ The Phoenicians, the other, that of Sophocles’ Antigone. I believe that this twofold of action may have harmed the play, which was otherwise replete with many beautiful passages. I modeled my play more closely on The Phoenicians of Euripides. As for the version of La Thébaïde that appears in Seneca, I am rather of the opinion of Heinsius, and hold, with him, that not only is it not a play of Seneca’s, but that, rather, it is the work of a rhetorician, who had no understanding of what a tragedy should be.

The catastrophe of my play is perhaps a bit too bloody. Indeed, there is hardly a character in it who does not die at the end. But, then, that is the Saga of Thebes, that is to say, the most tragic subject of antiquity.

Love, which ordinarily plays such a large part in tragedy, plays almost none here. And I suspect I would not allow it a greater one if I had it to do over again. For it would require either that one of the brothers be in love, or that they both be. And how would it look to give them any interests other than that of the famous hatred that entirely preoccupies both of them? Or else, one would have to relegate the love interest to one of the secondary characters, as I have done. And then that passion, which becomes irrelevant to the subject, can only produce the most mediocre effects. In a word, I am persuaded that the tenderness or the jealousy of lovers could find no place amid the incest, the parricides, and all the other horrors that make up the history of Oedipus and of his unfortunate family.