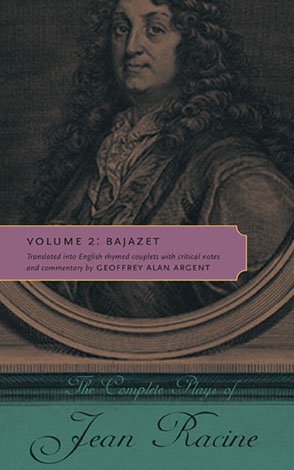 Complementing the translation are the illuminating Discussion, intended as much to provoke discussion as to provide it, and the extensive Notes and Commentary, which clarify obscure references, explicate the occasional gnarled conceit, and offer their own fresh and thought-provoking insights.

Bajazet, Racine’s seventh play, first given in 1672, is based on events that had taken place in the Sultan’s palace in Istanbul a mere thirty years earlier. But the twilit, twisting passageways of the Seraglio merely serve as a counterpart to the dim and errant moral sense of the play’s four protagonists: Bajazet, the Sultan’s brother; Atalide, Bajazet’s secret lover; Roxane, the Sultaness, who is madly in love with Bajazet and dangles over his head the death sentence the Sultan has ordered her to implement in his absence; and Akhmet, the wily, well-intentioned Vizier, who involves them all in an imbroglio in the Seraglio, with disastrous consequences. Unique among Racine’s plays, Bajazet provides no moral framework for either protagonists or audience. We watch as these benighted characters, cut adrift from any moral moorings, with no upright character at hand to serve as an ethical anchor and no religious or societal guidelines to serve as a lifeline, flail, flounder, and finally drag one another down. Here, Racine has presented us with his four most mercilessly observed, most subtly delineated, and most ambiguously fascinating characters. Indeed, Bajazet is certainly Racine’s most undeservedly neglected tragedy.

This translation of Bajazet, Racine’s seventh play, is one of a series which, when complete, will offer in English translation all twelve of Racine’s plays (eleven tragedies and one comedy), only the third such traversal since Racine’s death in 1699. This traversal, in addition, is the first to be composed in rhymed iambic pentameter couplets. My strategy has been to reconceive Racine in that pedigreed indigenous English verse form in order to produce a poetic translation of concentrated power and dramatic impact. After all, as Proust observes, “the tyranny of rhyme forces good poets into the discovery of their best lines”; and while subjected to that tyranny, I took great pains to render Racine’s French into English that is incisive, lucid, elegant, ingenious, and memorable. For I believe that the proper goal of a translation of a work of literature must be, first and foremost, to produce a work of literature in the language of the target audience. For a considerably more expansive discussion of my approach to translation, as well as a vigorously, rigorously argued rationale for my decision to employ rhymed couplets, I direct the interested reader to the Translator’s Introduction, which appears in Volume I of this series, devoted to my translation of Racine’s first play, The Fratricides.

This translation is based on the definitive 1697 edition of Racine’s theater as it appears in the Bibliothèque de la Pléiade edition of 1980, edited by Raymond Picard. The 1697 text represents Racine’s final thoughts on this play. The divergences between the first (1672) and last editions are, with two exceptions, relatively inconsequential. Most of them involve minor textual emendations that Racine made for the later edition, virtually all of which, one may confidently assert, represent clear improvements over the earlier versions: improvements in diction, concentration, clarity, and impact. The only significant change Racine made was to excise two brief passages (IV.v.53–56 and V.iv.90–93). These I have chosen to reinstate into the main body of the text, for reasons I explain in the relevant notes. The translations of Racine’s first and second prefaces are my own, as are the quotations from the critical commentaries in the Picard and Forestier editions that appear in the Discussion and the Notes and Commentary.

I have preserved the scene divisions as they are given in the Pléiade edition (each new scene marking the arrival or departure of one or more characters) and have, likewise, listed the characters participating in each scene just below the scene number. I have, in addition, furnished these translations with line numbers (every fifth line being numbered, and the numbering beginning anew for each scene), for ease of reference for readers and actors, and to enable me to cite passages precisely in the Discussion and the Notes and Commentary. Be it noted that these line numbers do not conform to those of any French edition, the Picard, for example, providing no line numbers at all and the Forestier using unbroken numbering from beginning to end; besides, I have sometimes expanded one of Racine’s couplets into a tercet (or even, more rarely, into two couplets), a procedure that would vitiate any line-for-line correspondence.

The Discussion is intended as much to promote discussion as to provide it. The Notes and Commentary, in addition to clarifying obscure references and explicating the occasional gnarled conceit, offer, I hope, some fresh and thought-provoking insights, such as are occasionally vouchsafed the sedulous translator. But, whatever the merit of the ancillary critical material, I believe that the enduring value of these volumes will reside in the excellence of the translations. New approaches to studying Racine will undoubtedly be discovered and developed, opponent schools of thought will continue to clash, arguments may be challenged or overturned, but I am hopeful that the value of these translations will prove indisputable.

Once again, I must acknowledge the maddeningly indefatigable efforts of Leslie Eric Comens, who, for many months seldom to be found without a copy of my Bajazet in his hands, has never allowed me to leave well enough alone.