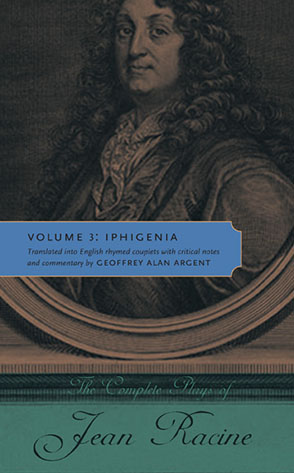 Complementing the translation are the illuminating Discussion, intended as much to provoke discussion as to provide it, and the extensive Notes and Commentary, which offer their own fresh and thought-provoking insights.

In Iphigenia, his ninth play, Racine returns to Greek myth for the first time since Andromache. To Euripides’s version of the tale he adds a love interest between Iphigenia and Achilles. And dissatisfied with the earlier resolutions of the Iphigenia myth (her actual death or her eleventh-hour rescue by a dea ex machina), Racine creates a wholly original character, Eriphyle, who, in addition to providing an intriguing new denouement, serves the dual dramatic purpose of triangulating the love interest and galvanizing the wholesome “family values” of this play by a jolt of supercharged passion.

Geoffrey Alan Argent is an independent scholar residing in Pennsylvania. He has received a 2011 American Book Award for The Fratricides, the first volume of The Complete Plays of Jean Racine.

While there might be some truth in the observation that in both Iphigenia and Bajazet a key element of the drama involves the stoppage of the wind, the fact that in Iphigenia the wind in question is in the sails, whereas in Bajazet it is in the windpipe, is indicative of the marked contrast between the two plays. Encountering Iphigenia after Bajazet, with its tenebrous, stifling, claustrophobic atmosphere (Akhmet’s plea to Roxane to “let the bright sun at last greet Bajazet” [Bajazet I.ii.25]—and he might as well be speaking of the play as of its eponymous hero—is never heeded), one soon senses that Iphigenia exudes a far more breathable air, and this is in keeping with its more benign outlook and its unequivocally happy ending, neither awful nor elegiac, a unique phenomenon among Racine’s secular tragedies. Iphigenia begins in the predawn twilight (“Its feeble rays could scarcely light your way” [I.i.5]), which is soon overtaken by day (“Already I see the rising sun aglow” [I.i.159]), and ends in a radiant sunset—or is it the refulgence of Diana’s benison? (“The heavens, flashing lightning, opened wide: / By those blest beams we all felt sanctified” [V.fin.sc.64–65].) Geoffrey Brereton remarks (Brereton, 196): “It is the only one of Racine’s tragedies which gives the illusion of happening in the open air, under a clear sky on the shore of a windless sea. The lightness and grace of its atmosphere rise almost palpably from the poetry even as it stands on the printed page.” (And in fact, the play was first presented before the royal court, al fresco, in the gardens of Versailles.) The only shadows that darken the ending of Iphigenia are those cast by hindsight, by our knowledge of the eventual fate of the protagonists, of which no hint is allowed to mar the play’s final moments. And some of the heaviest of those shadows are cast by Racine’s own, earlier (that is, older) Andromache, which treats the aftermath of the Trojan War and the ordeal of its survivors; but that adumbration is produced less by any direct allusion to Agamemnon, Clytemnestra, Achilles, or Iphigenia than by the recapitulation of their tragic destiny in that of their children. After all, each of the four protagonists in Andromache is the child of characters who appear or are mentioned in Iphigenia: Hermione is the daughter of Melelaus and Helen; Orestes is the son of Agamemnon and Clytemnestra; Pyrrhus is the son of Achilles (but, clearly, not of Iphigenia—rather, of Deidamia, but that is quite another story); and Andromache is the daughter-in-law, if not the daughter, of Priam, being the wife of Priam’s son Hector, the great Trojan hero. In this play, however, we are dealing with a tragicomedy, in its older, stricter sense, that is, a tragedy in which a tragic outcome is averted. (In its more colloquial sense—a mixture of tragedy and comedy—the term better applies, surprisingly enough, to Bajazet.)

Part of the “wholesomeness” of the play arises from the dominant presence of a coherent, healthy family, also a unique phenomenon in Racine. Roland Barthes maintains that the family “is in fact the central character of the play. . . . In Iphigénie there is an intense family life. In no other play has Racine presented a family so solidly constituted, provided with a complete nucleus (father, mother, daughter), with collaterals (Helen, around whom the dispute rages), relatives (husband and wife hurl them at each other), and an imminent alliance” (Barthes, 114). If we scour Racine’s other plays, we find that the familial relations on display there are more often characterized by indifference, jealousy, or downright hatred. In The Fratricides (the title tells the whole story), Creon cynically but accurately observes: “When strangers hate, it’s not of long duration; / When nature’s bonds, though, suffer violation, / Nothing . . . can bind again / Those whom such potent ties could not restrain” (The Fratricides III.vi.67–70). Creon himself, whom “nature’s bonds” scarcely incommode, dismisses the death of his son Haemon with the brutally callous line “Heav’n rids me of my rival with my son” (The Fratricides V.iv.33). In Phaedra, the drama centers on a family that, its integrity having been compromised by the wife’s infatuation for her stepson, is finally destroyed by it. Brothers, particularly, do not fare well in Racine: there are the titular enemies of The Fratricides, and in Mithridates we find the title character’s two sons, Xiphares and Pharnaces, clenched in a struggle to win the throne and Monima, their father’s fiancée, whom they both covet. In Britannicus, the smoldering rivalry between the title character and Nero, his stepbrother, ends in Nero’s horrific poisoning of Britannicus. And the intrafamilial vendetta in Athaliah, which has already resulted in a gruesome bloodbath before the action of the play commences, is destined to be renewed some years later (as we learn from the high priest’s prophetic utterances), when the seemingly virtuous new king of Judah orders the execution of his foster brother, the son of that same high priest, who had cared for him like his own son.

In Iphigenia, by contrast, the family is not dysfunctional: it is beleaguered. It is not threatened from within by internecine conflict and hate, but from without, and bilaterally: on one side, it is menaced by an oracle that, ostensibly, ordains the “august sacrifice austere” (I.i.58) of the daughter Iphigenia; on the other, it is vulnerable to the insidious, invidious plotting of Eriphyle, Achilles’ Lesbian captive and Iphigenia’s protégée, who lusts after Iphigenia’s fiancé, Achilles, and attempts to thwart Iphigenia’s efforts to flee from Aulis with her life. Since for the first half of the play it is only Agamemnon (among the principals) who knows of the threat to his daughter, it is he who must contend with the fatal injunction. In the opening scene of the play, we learn of his earlier ploy to lure his daughter to Aulis (in order to comply with the oracle’s demands) and of his subsequent stratagem (after he has experienced a change of heart) to forestall Iphigenia’s arrival. Later we witness his tormented struggle as Ulysses tries to convince him “to spend the blood that buys our victory” (I.iii.42). Once his wife, daughter, and Achilles learn of the impending sacrifice, he must, in Eriphyle’s words, struggle against

A mother’s rage, a daughter’s agony,

The cries, the frenzy of her family,

His own blood, too, so ready to betray him,

And fierce Achilles, ready to waylay him.

Thus, Agamemnon is caught between the opposing parties bearing down on him: on one side, those who wish to see the oracle’s death sentence carried out (Ulysses, Calchas, and the Greek army), and, on the other, those who, having learned of that death sentence, vehemently oppose its effectuation (principally Clytemnestra and Achilles, but Iphigenia, too, in her passive, but subtly persuasive, way). But Agamemnon is also caught in an internal struggle between, on one side, his pride, his ambition, his patriotism, and his greed for glory, and, on the other, his sincere and deep-rooted love for his daughter. These internal struggles and external clashes provide the dramatic scaffolding for the play, reaching their climax in Act IV with Agamemnon’s epic confrontations (as foreseen by Eriphyle) with his daughter, with his wife, with his prospective son-in-law, and, ultimately, with himself. And it is only after that final “encounter,” after his intense soul-searching (which protracts the end of the fourth act), that his tormented tergiversations finally stabilize into a determination to save his daughter at all costs.