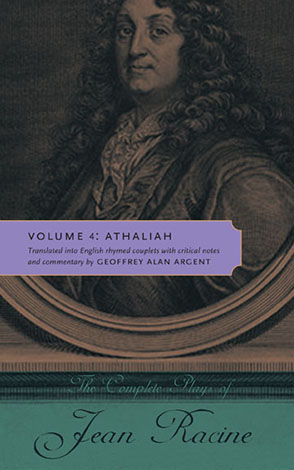 This is the fourth volume of a projected translation into English of all twelve of Jean Racine’s plays—only the third time such a project has been undertaken. For this new translation, Geoffrey Alan Argent has rendered these plays in the verse form that Racine might well have used had he been English: namely, the “heroic” couplet. Argent has exploited the couplet’s compressed power and flexibility to produce a work of English literature, a verse drama as gripping in English as Racine’s is in French. Complementing the translation are the illuminating Discussion, intended as much to provoke discussion as to provide it, and the extensive Notes and Commentary, which offer their own fresh and thought-provoking insights.

Geoffrey Alan Argent is an independent scholar residing in Pennsylvania. He was the recipient of a 2011 American Book Award for The Fratricides, volume 1 of The Complete Plays of Jean Racine (Penn State, 2010).

After completing Phaedra, Racine underwent a self-imposed retirement from the theater and only resumed his career as a playwright a dozen years later at the persuasive, if not peremptory, request of Madame de Maintenon, Louis XIV’s morganatic wife, who solicited a play to be performed by the schoolgirls of Saint-Cyr, the school she had recently established for daughters of the impoverished nobility. Instructed to choose a subject without a strong love interest (the schoolgirls’ performance of the too torrid Andromache had convinced their patroness of the necessity for this precaution), and probably considering a biblical subject as most appropriate to the venue, Racine produced Esther, which was successful enough to have induced the king, at his wife’s urging, to demand another. The resultant play, Athaliah, which was to prove his last, finds Racine at the top of his form, more than one critic, both then and now, judging it Racine’s supreme masterpiece.

Unlike Esther, the general outline of whose plot is taken intact from the Bible’s book of that name, Athaliah’s broad narrative arc (most notably its conflation of the biblical accounts of Athaliah and Joash) and all the details of its plot and characterization were fashioned by Racine (who, somewhat misleadingly, labeled the play “a tragedy drawn from sacred scripture”) from the merest hints in the biblical passages relating to its protagonists. Considering that for his last two plays Racine chose biblical subjects and that his earlier abandonment of the theater was partially motivated by a renewed religious fervor, which would have precluded writing plays as too worldly an occupation, we might be disposed to assume that those two plays are in some strong sense “religious” plays, perhaps even meditations on God, faith, and providence. And there are indeed some critics who, however ready they may be to dismiss as irrelevant the role of the heathen gods in Racine’s other plays, regard Jehoiada’s God as an unseen but potent presence in the play under consideration, directing the proceedings and impinging on the action, as does Sultan Amurat in Bajazet. But whereas in that play, the sultan’s decree has determined the outcome even before the action commences, here one can make no case for any direct interference by the God so often invoked, any more than one can do for such interference on the part of the Greek gods in The Fratricides or Iphigenia. True, the characters in those plays are ever ready to hold “heaven” (a metonymy for those gods) accountable for the reverses they suffer. In The Fratricides Jocasta instructs her daughter in its malignant ways:

It always grants some easement to my woe;

Alas! just when its aspect seems most fair,

Its deadliest stroke it hastens to prepare.

Agamemnon, too, imputes to heaven a watchful and cunning interference in his affairs: “In vain, just heav’n, my prudence has resorted / To schemes which your vindictiveness has thwarted!” (Iphigenia I.v.1–2). But in neither play do the gods actually intrude upon the action. In the denouement of Iphigenia certain manifestations suggest a benign numinous presence:

Scarce had her scarlet blood suffused the ground,

When the Gods’ thunder started to resound;

The winds, then, moved the air to happy song;

With booming voice the vast sea sang along.

The pyre appeared to set itself alight.

By those blest beams we all felt sanctified.

But these can just as easily be explained as meteorological phenomena, and Racine is careful to suggest that it is only one “astonished soldier” who claimed that

Diana, descended from the skies,

Approached the altar in a cloud’s disguise,

And rising with the fires that sought the sky,

Our incense and our prayers bore up on high.

And in Athaliah there is no more significant evidence of any supernatural intervention. This laissez-faire policy on the part of the Deity must be all the more striking for an audience who has heard Jehoiada scolding Abner for needing to be reminded of “the spate / Of prodigies that God’s poured forth of late” (I.i.109–10), several of them clearly the result of intercession by a heavenly agent. He seems to promise us the renewal of such miracles:

He still can show His might when He’s inclined,

His people ever present to His mind.

But our expectations are belied by the event. The climactic scene of Athaliah features not so much a coup de foudre as a coup de théâtre and seems less the product of providential interference by a benign deity than the triumph of savvy stagecraft on the part of Jehoiada.