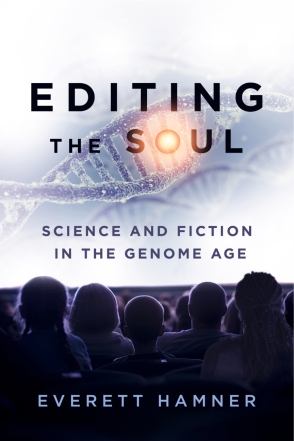 Personal genome testing, gene editing for life-threatening diseases, synthetic life: once the stuff of science fiction, twentieth- and twenty-first-century advancements blur the lines between scientific narrative and scientific fact. This examination of bioengineering in popular and literary culture shows that the influence of science on science fiction is more reciprocal than we might expect.

Looking closely at the work of Margaret Atwood, Richard Powers, and other authors, as well as at film, comics, and serial television such as Orphan Black, Everett Hamner shows how the genome age is transforming both the most commercial and the most sophisticated stories we tell about the core of human personhood. As sublime technologies garner public awareness beyond the genre fiction shelves, they inspire new literary categories like “slipstream” and shape new definitions of the human, the animal, the natural, and the artificial. In turn, what we learn of bioengineering via popular and literary culture prepares the way for its official adoption or restriction—and for additional representations. By imagining the connections between emergent gene testing and editing capacities and long-standing conversations about freedom and determinism, these stories help build a cultural zeitgeist with a sharper, more balanced vision of predisposed agency.

A compelling exploration of the interrelationships among science, popular culture, and self, Editing the Soul sheds vital light on what the genome age means to us, and what’s to come.

“Hamner’s critical modesty gives us a humble account that knows how to stay local, respect differences, and honor the acuity of its subjects of study, be they nucleotides or novelists. . . . [A] book of surpassing subtlety and nuance.”—Rebekah Sheldon, Science Fiction Studies

“Written with clarity and an appealing balance, Editing the Soul makes an original contribution to an important topic—the way novels, films, and television about genetics are reshaping our understanding of human nature.”—Jay Clayton, author of Charles Dickens in Cyberspace: The Afterlife of the Nineteenth Century in Postmodern Culture

“Editing the Soul plumbs contemporary literature, film, and comics dealing with genetic modification. Drawing on postsecularism, Hamner shows how these works enable us to balance the drive for technotranscendence with the continuing demand for deep human meaning. Standout readings of the fiction of Octavia Butler and Margaret Atwood are some of the many pleasures of this important, accessible, and highly timely book.”—Susan Merrill Squier, author of Epigenetic Landscapes: Drawings as Metaphor

“What Editing the Soul shows is that, far from offering simplistic depictions of utopia or dystopia, genetic science has become a variable field for the popular cultural imagination.”—Lars Schmeink, Foundation: The International Review of Science Fiction

“Hamner’s careful balance between rigorous pragmatism and creative flexibility is refreshing. And the book’s straightforward prose can be understood not as a rejection of critical theory but rather as praxis in his call for interdisciplinary collaboration.”—Katherine Thorsteinson, Modern Fiction Studies

“These [Human Programming and Editing the Soul] are both exemplary works of criticism, which should serve as models for what interdisciplinary literary-cultural criticism can do for a twenty-first-century academy that needs smart, careful humanities scholarship on the sciences more than ever.”—Gerry Canavan, American Literature

1. Genetics as Science, Ideology, and Fiction

2. The Evolution of Genetic Fantasy

3. The Cultural Determinism of Genetic Realism

5. The Predisposed Agency of Genetics and Fiction

A Feeling of Wrongness

Pessimistic Rhetoric on the Fringes of Popular Culture