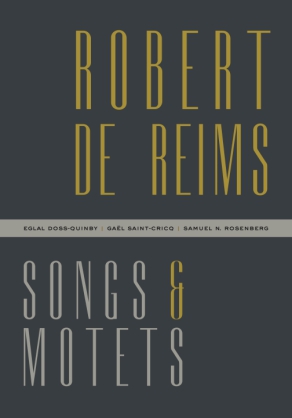 “Active at the turn of the thirteenth century, Robert de Reims is the first trouvère to be involved with both monodic and polyphonic compositions, which makes this new edition of his work highly useful. The volume gives a very complete survey of the corpus and its transmission, of Robert’s thematic choices and linguistic and versification options, as well as some elements concerning the analysis of the music.”—Anne Ibos-Augé, author of Chanter et lire dans le récit médiéval

Robert de Reims, also known as “La Chievre de Rains,” was among the earliest trouvères—poet-composers who were contemporaries of the troubadours but who wrote in the dialects of northern France. This critical edition provides new translations into English and modern French of all the songs and motets ascribed to him, along with the original texts, the extant music, and a substantive introduction.

Active sometime between 1190 and 1220, Robert was an influential figure in the literary circles of Arras. Thirteen compositions set to music are here attributed to him, including nine chansons and four polyphonic motets that were broadly disseminated in the thirteenth century and beyond. Robert’s work is exceptional on a number of fronts. He lavished particular care on the phonic harmony of his words. Acoustic luxuriance and expertise in rhyming, grounded in the play of echoes and variation (often extending into the music), constitute the hallmark of his poetry. Moreover, he is the earliest trouvère known to have composed a parodic sotte chanson contre Amours (silly song against Love).

Located clearly at the nexus of monophonic song and polyphony, Robert’s corpus also poses the intriguing question of trouvère participation in the development of the polyphonic repertory. The case of Robert de Reims jostles and tempers the standard history of the chanson and motet.

Accessible and instructive, this trilingual critical edition of his complete works makes the oeuvre of this innovative and consequential trouvère available in one volume for the first time.

“Active at the turn of the thirteenth century, Robert de Reims is the first trouvère to be involved with both monodic and polyphonic compositions, which makes this new edition of his work highly useful. The volume gives a very complete survey of the corpus and its transmission, of Robert’s thematic choices and linguistic and versification options, as well as some elements concerning the analysis of the music.”—Anne Ibos-Augé, author of Chanter et lire dans le récit médiéval

“As a composer of motets as well as monophonic songs, Robert de Reims is the first known trouvère to cross the boundaries between the monophonic and polyphonic repertoires. As such, his corpus serves as a touchstone for our understanding of the musical culture that shaped the trouvères’ predominantly monophonic musical language. The expert textual and musical transcriptions in this edition are enhanced by idiomatic and flowing translations into modern English and French.”—Christopher Callahan, coeditor of Les chansons de Colin Muset: Textes et mélodies

“This edition provides a treasure trove of information on the songs and motets of Robert de Reims as well as the textual and cultural contexts in which they survive. The editors’ efforts provide tantalizing leads for further study.”—Daniel E. O'Sullivan, Textual Cultures

“This edition merits high praise. Its inclusion of Robert's music, its juxtaposition of the motets and chansons, and its French and English translations ensure its value to a wide audience. It is a beautifully clear, detailed, and thorough edition that will be useful to Anglo- and Francophone scholars of literature and music alike.”—Anne Levitsky, The Medieval Review

Eglal Doss-Quinby is a translator and literary scholar specializing in Old French songs and motets. She is Professor of French Studies at Smith College.

Gaël Saint-Cricq is a music scholar specializing in polyphony and song in the long thirteenth century. He is Maître de conférences at the Université de Rouen.

Samuel N. Rosenberg was a literary scholar and translator of French poetry of the Middle Ages and the nineteenth century. He was Professor Emeritus of French at Indiana University and the translator of Robert the Devil and Paul Verlaine: A Bilingual Selection of His Verse, both published by Penn State University Press.

Robert de Reims, dit La Chievre: What We Know, What We Can Surmise

The Corpus and Its Manuscript Tradition

Music and Text in the Works of Robert de Reims

Presentation of the Critical Apparatus 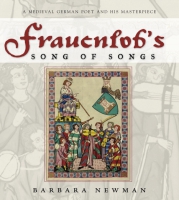 A Medieval German Poet and His Masterpiece

Melusine; or, The Noble History of Lusignan

Jean d'Arras, and Translated and with an introduction by Donald Maddox and Sara Sturm-Maddox